The past 72 hours of Trump-Russia news, explained 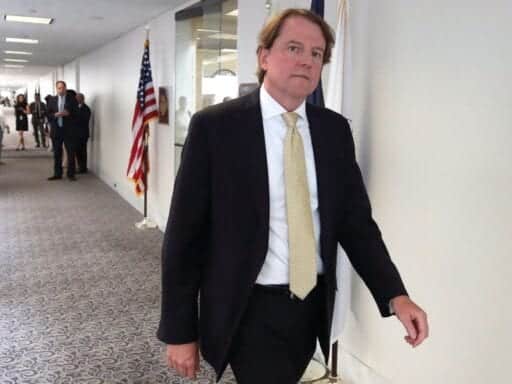 Don McGahn, Michael Cohen, and everything else you might have missed.

That the jury went home on Friday without a verdict ended up being the least intriguing development in the Trump-Russia investigation this weekend.

On Friday evening, special counsel Robert Mueller’s team filed court documents recommending up to a six-month prison sentence for George Papadopoulos, a former Trump campaign aide who pleaded guilty to lying to the FBI and had been cooperating with the Mueller investigation.

On Saturday, the New York Times published a report revealing that White House Counsel Don McGahn has been closely cooperating with the special counsel investigation of Trump’s possible attempts to obstruct justice.

This sparked a Trump Twitter rant that lasted through the weekend, in which he equated Mueller with the late Sen. Joseph McCarthy, who investigated US government officials he suspected of being secret communist sympathizers in the 1950s, often with little to no evidence.

Sunday saw Trump attorney Rudy Giuliani use the disturbingly Orwellian phrase “truth isn’t truth” to try to deflect questions about why Trump won’t sit down for an interview with Mueller. (Giuliani clarified his comments on Monday.)

It also brought the news that Manhattan federal prosecutors might be closer to charging Michael Cohen, Trump’s former attorney, for nearly $20 million in bank fraud.

That’s a lot of stuff. If, like the Manafort juror, you wanted to go home early on Friday and enjoy a news-free weekend, here’s what you missed.

The jury is still deliberating in the Paul Manafort trial

The jury returned for its third day of deliberations on Monday in the trial of Paul Manafort. Judge T.S. Ellis met with both government prosecutors and defense lawyers twice on Monday morning and said the contents of the conservations would be released after the trial.

So the waiting game continues. The jury has been deliberating since Thursday morning, sending the judge four questions on day one of deliberations, and then asking for an early dismissal on the second day.

Manafort’s defense team has taken the delay as a good sign, but experts told Vox’s Emily Stewart over the weekend that it’s hard to draw any conclusions from the lack of verdict just yet. This is a complicated case involving 18 counts including bank fraud, bank fraud conspiracy, and other financial crimes.

“Probably means nothing,” Shira Scheindlin, a former United States district judge in the Southern District of New York, told Stewart. “Most juries are very meticulous. Bank fraud and tax fraud are complex statutes and involve unfamiliar concepts. They are not in the everyday experience of jurors.”

Mueller’s attorneys have recommended that former Trump campaign aide George Papadopoulos face up to six months in prison for lying to investigators about his contacts with Russians during the 2016 presidential campaign.

There are two key revelations from the court documents. The first: Papadapoulos most definitely lied, and government prosecutors warned him repeatedly against it.

In the court documents, Mueller’s team described Papadapoulos’s crime as serious and said he “caused damage to the government’s investigation into Russian interference in the 2016 presidential election” by lying to investigators early on when “key decisions” about “who to interview and when, were being made.”

Prosecutors said that Papadapoulos misled investigators about his contacts with professor Joseph Mifsud, who told him that the Russians had “thousands of emails” on Clinton. Papadapoulos eventually spilled this information to an Australian diplomat, who tipped off the FBI. This — and not the Steele dossier, as Trump and his Republican allies claim — is what initiated the investigation into the Trump campaign’s ties to Russia.

“The defendant’s false statements were intended to harm the investigation, and did so,” government prosecutors wrote.

The second big revelation is that although Papadapoulos made a deal with Mueller’s team to cooperate in exchange for a reduced sentence, it seems he was reluctant to actually cooperate, and what he did offer wasn’t all that valuable.

According to the court filing:

Mueller’s team also flagged interviews that Papadapolous and his fiancée gave with the press, which further soured the government on working with Papadapoulos.

Which means Papadapoulos will be now punished for his crimes. His sentence is expected on September 7.

The New York Times’s Maggie Haberman and Mike Schmidt reported Saturday that White House counsel Don McGahn has done three voluntary interviews with the special counsel’s office, totaling more than 30 hours and covering topics from Trump’s decision to fire FBI Director James Comey to Trump’s attempts to fire Mueller himself. Some of the incidents wouldn’t have been known to investigators without McGahn talking about them openly, according to the Times.

According to the Times, McGahn has been so chatty because he feared Trump was setting him up to take the fall for obstruction of justice charges. McGahn “told people he was determined to avoid the fate of the White House counsel for President Richard M. Nixon, John W. Dean, who pleaded guilty to conspiracy to obstruct justice in the Watergate scandal.”

Trump’s original legal team, which included attorneys John Dowd and Ty Cobb, had pursued a strategy of cooperation with Mueller, believing the more forthcoming they were, the sooner the investigation would wrap up. McGahn, however, reportedly thought this was something of a trap and wanted to make clear to prosecutors that he did nothing wrong.

This news is a potentially big deal — but it really all depends on what McGahn told investigators. And there are still a lot of outstanding questions about that. Even Trump’s current legal team doesn’t seem to be all that sure if McGahn’s account hurts or helps the president, as McGahn’s lawyers didn’t fully brief Trump’s legal team.

Dowd, Trump’s former attorney, told CNN that McGahn was a “strong witness for the President’s case.” Giuliani said the same on NBC’s Meet the Press.

Trump, meanwhile, seemed incensed by the story, tweeting about fake news and calling Dean, who flipped on Nixon, a “RAT.”

The failing @nytimes wrote a Fake piece today implying that because White House Councel Don McGahn was giving hours of testimony to the Special Councel, he must be a John Dean type “RAT.” But I allowed him and all others to testify – I didn’t have to. I have nothing to hide……

The bottom line: Mueller and his attorneys know what McGahn told them and how it may or may not play into the obstruction of justice investigation — and they’re absolutely not going to give any hints. Giuliani and Trump’s team can claim that this benefits the president, but they’re also speculating.

Trump probably won’t be sitting down with Mueller anytime soon

Amid the scramble over McGahn’s sit-downs with the special counsel, Giuliani made it quite clear that the president isn’t sitting down for an interview with Mueller’s team anytime soon.

The saga of whether Trump will talk to investigators has been going on for some time — adding up to months of excuses intended to obfuscate and delay.

Which brings us to Giuliani’s latest excuse: If the president sits down with Mueller, Trump will end up perjuring himself because “the truth isn’t the truth.”

Giuliani tried to clarify his remarks Monday, saying that a Trump interview would set up a “‘he said, she said’ puzzle.”

My statement was not meant as a pontification on moral theology but one referring to the situation where two people make precisely contradictory statements, the classic “he said,she said” puzzle. Sometimes further inquiry can reveal the truth other times it doesn’t.

What Giuliani is really getting at here is that what the president says might not align with the testimony of other witnesses Mueller has spoken to in the course of the investigation, and that could put the president at risk of perjuring himself.

Either way, Trump doesn’t appear any closer to sitting down with Mueller for a voluntary interview, which means the likelihood of a legal showdown over a presidential subpoena seems more and more likely.

Michael Cohen may get charged with bank fraud soon. Will he cooperate with prosecutors?

Federal prosecutors in the Southern District of New York are apparently getting closer to filing charges against Trump’s former attorney Michael Cohen, possibly by the end of this month.

Cohen has been in legal jeopardy for some time, after the feds raided his home, office, and hotel room on April 9. Mueller referred the case to the Southern District of New York.

Right now, prosecutors seem to be homing in on his taxi business — in particular, whether he misrepresented the value of his business assets to two financial institutions, and whether he failed to report money he made from his business to the Internal Revenue Service. (Cohen owned taxi medallions, which are the permits operators need to drive taxis in New York City; they used to be valued well over $1 million but have nosedived in recent years, mostly from competition from ride-hailing services like Uber and Lyft.)

This seems to be all about Cohen’s shady business activities and not his former boss’s activities. But the question now is whether Cohen may plead guilty to these charges and decide to “flip” on Trump — whether about the hush money payments, Trump’s other business transactions, or Trump’s ties to Russia.

Cohen has been signaling for a while that he might be ready to make a deal with prosecutors. His attorney, Lanny Davis, released a secret audio recording from September 2016 of Cohen and Trump discussing a hush-money payment to Karen McDougal. Sources also told CNN last month that Cohen was willing to tell Mueller that Trump knew ahead of time about the 2016 Trump Tower meeting, during which Russians offered dirt on Hillary Clinton to Donald Trump Jr. and other members of Trump’s team.

The Southern District of New York, in pursuing plea deals, traditionally requires defendants to admit to all crimes they’ve committed, even if they’re unrelated to questions that sparked the initial investigation. If Cohen does reach a plea agreement, he would likely have to talk to Mueller, according to the Times. But it’s not yet clear if Cohen is willing to cooperate — or if he has anything of value for federal prosecutors to make a deal worthwhile.