The past, present, and future of the singular “they” 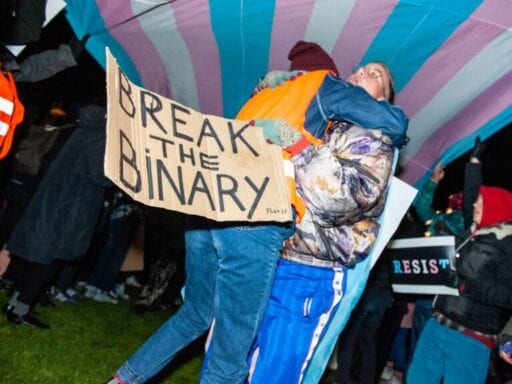 Share
Loading...
Demonstrators attend a rally for the rights of transgender, nonbinary, and intersex people in Amsterdam on October 28, 2018. | NurPhoto via Getty Images

The pronoun is Merriam-Webster’s Word of the Year. Here’s why.

Many nonbinary people, who don’t identify as male or female, have been using the pronouns “they” and “them” for years. Being able to use a pronoun that’s not “he” or “she” “is really affirming and really welcoming and freeing for many people,” Addison Rose Vincent, acting executive director of the nonprofit Intersex & Genderqueer Recognition Project, told Vox.

And when people use “they” and “them” pronouns, they’re tapping into a long history — “they” has been used as a singular pronoun in English since the late 1300s, if not before.

Despite this background, the pronoun has received pushback, with grammar sticklers arguing that it’s incorrect English and right-wing commentators dismissing its use as mere political correctness. University of Toronto professor Jordan Peterson, for example, proclaimed in 2016, “I don’t recognize another person’s right to determine what pronouns I use to address them.”

But recently, “they” has been getting a new level of mainstream recognition. In September, Merriam-Webster added the singular pronoun “they,” used to refer to “a single person whose gender identity is nonbinary,” or to a person whose gender is unknown or is intentionally not revealed. And earlier this month, the publication went a step further and chose the pronoun as its Word of the Year. Meanwhile, this October, the American Psychological Association (APA) endorsed the use of the singular “they” in scholarly writing.

For groups like the APA, the change is about recognizing that the pronouns “he” and “she” don’t describe all Americans. “We wanted to be sure that our entire community knows that we see you, we hear you, we value you,” Emily Ayubi, director of APA Style, told Vox. And for some nonbinary people, the changes are a sign that mainstream publications and groups are finally catching up to where they already are.

“It’s really important for these organizations to take a stance,” Vincent said, but at the same time, “we don’t necessarily need the approval or validation of anyone else to be who we are.”

“They” has been used a singular pronoun for centuries

The first known use of the singular “they” occurs in the 1375 poem William and the Werewolf, according to the Oxford English Dictionary. “Each man hurried … till they drew near … where William and his darling were lying together,” reads the relevant part of the poem, using a modern English translation. But it’s likely that the pronoun was in use long before then, writes Dennis Baron at the OED blog. In fact, the singular “they” didn’t fall out of favor until the 18th century, when grammarians started discouraging its use, according to Baron.

Over time, “he or she” (often just “he”) became more common. For example, someone might say “a person should enjoy his or her vacation.”

But, as Baltimore Sun copy editor John E. McIntyre noted, 19th- and 20th-century writers from Jane Austen to W.H. Auden still used the singular “they.” And while some people used “they” to describe a person whose gender was unknown — or to conceal that person’s gender — nonbinary people began using the pronoun as well.

For people who don’t identify as male or female, it was difficult to “navigate having to choose between he and she,” Vincent said, since neither applied. Instead, many nonbinary people use the pronouns “they” and “them” — meaning it’s correct to say, “They went to the store” rather than “She (or he) went to the store.”

“They” and “them” aren’t the only pronouns nonbinary people use — others have included “ze” and “hir.” But for people who do use those pronouns, it’s a way of reclaiming a history of the English language in which “they” has long been used in a gender-neutral way, Vincent said.

As the use of “they” became more visible, right-wing critics began to push back against its use. Among the most famous was Peterson, a psychology professor who’s hailed by conservatives and libertarians as a member of the “intellectual dark web.” In response to a 2016 Canadian bill banning discrimination on the basis of gender identity or expression, Peterson announced, “I’m not using the words that other people require me to use. Especially if they’re made up by radical left-wing ideologues.”

Others have argued against the singular “they” on grammatical rather than political grounds. New Yorker copy editor Mary Norris, for example, called it “just wrong” in her 2015 book Between You & Me. (However, she also said in a 2016 interview that when it comes to pronouns, “You should call people what they want to be called.”)

Ultimately, critics of singular “they” are increasingly in the minority as more publications and groups like the APA endorse the use of the pronoun. Writers are using it in two main scenarios, which Chelsea Lee outlined in an APA Style blog post in October: “when referring to a generic person whose gender is unknown or irrelevant to the context” and “when referring to a specific, known person who uses ‘they’ as their pronoun.”

While the APA endorses the use of correct pronouns to refer to specific people, it also supports using “they” in a general context, as in the sentence, “Each student submitted their art portfolio to the committee.” Using “their” in this case, rather than “his or her,” acknowledges that some students might not use “he” or “she” pronouns.

The APA change is important because scholars in psychology and other fields, as well as librarians, authors, and editors, look to the organization’s guidelines for advice, Ayubi said. The group’s goal in making the change was to help “ensure that everyone across the academy is using affirming and inclusive language,” Ayubi added. “We feel that it’s important for all readers to see themselves in academic works.”

The APA was also joining a growing list of publications that use the singular “they.” The Washington Post officially sanctioned the use of the pronoun in 2015; the Associated Press began allowing its use in “limited cases” in 2017. Vox has long had a policy of using the correct pronouns for all people, but has now updated its style guide to recommend the use of “they” in generic contexts rather than “he or she.”

The shift by the APA is part of a broader one in American society, as more companies, nonprofits, and individuals who do identify as male or female recognize something that nonbinary people have been saying for some time: The pronouns “he” and “she” don’t include everybody. That shift includes a move by people of all genders to list pronouns in their social media bios and email signatures, to point out that pronouns aren’t always obvious and shouldn’t be taken for granted. Several Democratic presidential candidates, for example, including Elizabeth Warren, Pete Buttigieg, and Julián Castro, include their pronouns in their Twitter bios.

In general, that’s good practice for everybody, Vincent said. “Whenever and wherever you introduce yourself with your name, introduce yourself with your own gender pronouns if possible,” they advised. “You never know the impact that you’ll make” on a nonbinary or trans person, who “might feel a little bit safer talking to you,” they explained. (It’s not always safe for nonbinary or trans people to be open about their gender identity, and some have made the point that pronoun-sharing in academic settings, for example, shouldn’t be required.)

And even though nonbinary people don’t need a stamp of approval from the outside, changes by the APA and others are a positive step forward, Vincent said. “It really helps to have these bigger organizations, especially those that are around mental health and grammar and writing, to be able to be behind us now.”

Overall, they said, “it’s about time.”

How chaotic will 2020’s virtual Emmys be? Picture 130 video feeds. At once.
Vox Sentences: America’s Next Top Justice
The devastating detail hiding in the French grammar of Portrait of a Lady on Fire
How a white evangelical family could dismantle adoption protections for Native children
Vox Sentences: The Trump administration is not down with CPP
Cesar Sayoc, who sent explosives to Trump critics, just received a 20-year sentence