The Pentagon is giving Trump his Space Force. Congress may take it away. 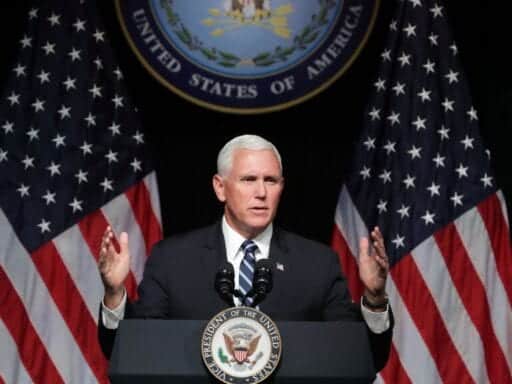 It all comes down to a defense budget fight for 2020.

President Donald Trump is really, really excited about a Space Force — his plan to create an entirely new branch of the US military dedicated to defending American satellites and more in space.

And though it seemed for a while that the Pentagon might try to keep it from happening, it looks like Trump may actually get his wish — that is, unless Congress turns him down.

On Thursday, Vice President Mike Pence delivered a big speech unveiling the Defense Department’s official plan to effectively create a Space Force in all but name.

But while the Pentagon can make certain moves without Congress’s approval, it’s up to lawmakers to actually authorize the new military branch.

“Congress definitely gets a vote,” Deborah Lee James, the last Air Force secretary and an open critic of the Space Force idea, told me.

Pence and Trump’s argument for creating a Space Force boils down to this: Enemies like China and Russia have, for example, tested technology to shoot down satellites, and the US wants to ensure the US can adequately defend itself against growing threats.

“What was once peaceful and uncontested is now crowded and adversarial,” Pence said on Thursday at the Pentagon. “It’s not enough to merely have an American presence in space, we must have American dominance in space. And so we will.”

The problem for Trump and Pence is that Congress hasn’t shown the same desire for a Space Force — in fact, they actually voted down a legislative proposal to create it last November.

But the White House is now hopeful they will receive congressional approval for the new military branch in the fiscal year 2020 defense budget. That’s in part because of a seeming change of heart — or at least, a capitulation — from Secretary of Defense Jim Mattis.

For much of last year, top Pentagon leaders railed against the idea of a Space Force. “The Pentagon is complicated enough,” Air Force Secretary Heather Wilson told reporters last summer. “This will make it more complex, add more boxes to the organization chart.” Mattis himself even came out against it.

Now, though, Mattis is at least somewhat supportive publicly of the idea. Which means it’s possible members of Congress may change their minds in Trump’s favor.

Expect Trump and Pence’s greatest ally in Congress for a Space Force, Rep. Mike Rogers (R-AL), to lead the way.

Rogers has said that creating the new branch is necessary for US national security, particularly because other countries are catching up to America’s power in space. “Russia and China have become near peers,” Rogers told NPR in June 2017. “They’re close to surpassing us. What we’re proposing would change that.”

He’s since led the legislative effort to create the new military service. Rogers tweeted his approval during Pence’s remarks Thursday:

I am thrilled about the news today. We in the House have been warning for years about the threats to our space assets and the unacceptably slow pace to develop more capable space systems. The report is a step in a multi-year process that will help ensure a safer, stronger America https://t.co/12SwRkaz1c

So what happens now? Well, in the short term, the Pentagon will do what it always does: makes changes in an extremely bureaucratic, wonky, and boring way.

Here’s how the Pentagon will start creating a Space Force

The Pentagon released a report after Pence’s speech outlining four main things it will do to begin establishing a Space Force:

All of that boils down to the Defense Department making bureaucratic changes to deal with space in the way Trump wants.

The biggest loser in all of this will be the Air Force, which already takes the military lead on defending American items in space — like the satellites that guide your GPS system — with an agency called the Air Force Space Command.

It’s unclear as of now, though, if that organization will go away or somehow fold under new Space Force.

That’s just one of the many, many questions I and others have about what a Space Force will actually look like. There is one important thing no one questions: that space has become much more dangerous in recent years.

“Space is no longer a peaceful domain”

What was once the final frontier could soon become the front line of a future conflict.

“Space is no longer a peaceful domain,” James said in an interview in July 2017. “There is a real possibility that a conflict on Earth could bleed into space.”

There are two main reasons for that: Russia and China. According to the Defense Intelligence Agency, Russia wants to gain more power in space because it believes gaining supremacy there will allow it to win future fights on this planet. And in late 2015, China created the Strategic Support Force, which is meant to streamline and improve its space, cyber, and electronic warfare missions.

The two countries are causing problems with anti-satellite technology, too, noted Director of National Intelligence Dan Coats in a Senate Intelligence Committee hearing last May — meaning they could mess with the satellites that help the US military do its job. The Pentagon is planning to open a space-war center to counter their threats.

Okay, but, like … what sort of conflict is actually going on in space? What are we really talking about here?

Basically, there is tons of military equipment in space, especially satellites. This kind of equipment helps the US, Russia, and China — and any tech-savvy force — navigate terrain and communicate with one another.

On top of that, assets in space help to track enemy fighters, take pictures for intelligence services, and even help control missiles. Without space support, it would be much harder to fight on Earth; that’s why Russia and China are investing so heavily in it.

But Russia and China aren’t space’s only threats. The area just outside Earth’s orbit has seen an explosion of commercial satellites and other communications equipment since the 1960s, put there first by countries and, as of late, by commercial companies. That equipment is used to help drivers reach their destination, help potential lovers swipe right (or left) on dating apps, or simply help people text a friend.

The chart below shows the huge growth in these satellites. The blue line represents their total growth since around 1960.

The internet, of course, adds a new complication to all the equipment that countries are putting in space. Most notably, equipment can potentially be hacked. For instance, a team of hackers could jam a satellite by messing with its signals so it interrupts the satellite’s normal activity, rendering it useless. That could cause problems for all sorts of everyday activities, like credit card transactions and phone calls.

Then, of course, there’s space debris threatening all of that commercial and military space equipment, since it could knock into the expensive machines. NASA estimates that there are 20,000 pieces of debris larger than a softball orbiting the Earth, about 500,000 pieces of debris the size of a marble or larger, and many millions of pieces that are too small to register.

All of this is why Trump, Rep. Rogers, and even former Defense Secretary Donald Rumsfeld believe the US needs a Space Force. It would ensure the safety of space equipment by monitoring physical and cyberthreats against US communication and navigation assets. It would be more of a defensive mission than an offensive one — for now. That doesn’t mean actual troops in space yet. But down the line, who knows?

Essentially, if the US military wants to protect life here on Earth, it needs to safeguard US assets in space. But is a Space Force the way to do it?

”This is a solution in search of a problem”

The main issue is that Rogers and others — and perhaps Trump himself — believe the Air Force isn’t paying enough attention to space. That makes sense to an extent, as the Air Force’s main directive is to focus on flying planes here on Earth.

Creating a new service would ensure that there’s a segment of the military whose job is to focus on space 100 percent of the time. That would allow the Space Force to counter Russia, China, and other threats while giving space-focused staff more bureaucratic power inside the Pentagon.

But Sean O’Keefe, a former NASA leader and Navy secretary, thinks creating a brand new branch of the military is not the right way to go. “This is a solution in search of a problem,” he told me in an interview last summer. Basically, he thinks the Air Force is already doing a fine job protecting space — even if it does privilege earthbound pilots. Creating a Space Force would just add another layer of bureaucracy to an already massive organization: the Pentagon.

James, the former Air Force secretary, agrees. She thinks dealing with the current complaints about the Air Force and space — 1) that it’s not well funded, 2) that acquisition takes too long, and 3) that there is no one person to call about military space operations — makes more sense.

The first complaint is already being mollified to an extent. The Air Force asked for a 20 percent increase in funds to focus on space in 2018. As for the third complaint, James feels it’s a common refrain heard at DOD that doesn’t necessarily just apply to the Air Force and space. “If you look at any warfare area in the Department of Defense, there’s no single bellybutton for anything,” she told me.

So clearly the Space Force has its detractors — including the current Air Force secretary. And of course, Congress has yet to officially mandate its creation.

But with Trump’s endorsement, the conversation has kicked into high gear once again. Time will tell if future US troops will be wearing space helmets.

Israeli forces shot a Palestinian journalist in the leg. He got no compensation.
Pennsylvania’s naked ballot problem, explained
Why conservatives’ favorite Twitter alternative has disappeared from the internet
Coronavirus, closed borders, and the authoritarian impulse
Star Trek: Deep Space Nine accidentally predicted the 2020s by writing about the 1990s
Democratic presidential candidates are holding a 6-hour forum on gun violence