The phone call that could get Trump impeached 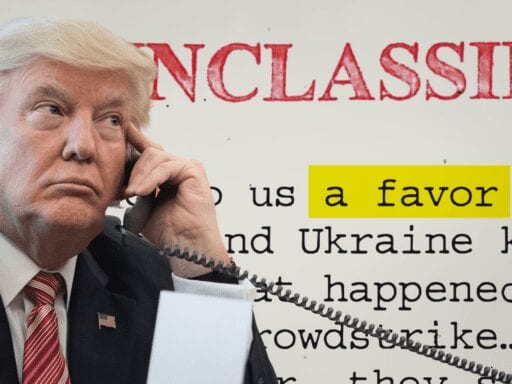 The impeachment inquiry into President Donald Trump started with a phone call.

There isn’t much dispute over what was said in the phone call, because Trump’s White House released a rough transcript. That document shows that Trump’s transgressions are quite simple.

According to the CIA officer who wrote a whistleblower report, “the President of the United States is using the power of his office to solicit interference from a foreign country in the 2020 US election.”

This phone call started as a routine conversation between world leaders. Trump was calling Ukrainian President Volodymyr Zelensky, whose party had just won the parliamentary election. But things took a turn when Trump asked Zelensky for a few favors. Most notably, he wanted Zelensky to dig up dirt on former Vice President Joe Biden, who is the leading candidate to challenge Trump in the 2020 election.

But things get complicated when we dig into what Trump wants Zelensky to investigate — because it has to do with a conspiracy theory Trump has peddled.

The theory is that, when Biden was vice president, he pushed to get Ukrainian prosecutor Viktor Shokin fired. This much is true, and Biden says as much; Shokin did not crack down on rampant corruption in Ukraine, and US leaders — including the Obama administration, top Democrats, and several Republican senators — wanted Shokin fired. But Trump has a theory that Biden pushed for Shokin to be fired because Shokin was investigating a company called Burisma — a company Biden’s son, Hunter, worked for.

Once we get through all the confusion Trump has introduced, we get back to the simple thing Trump did wrong: He asked a foreign leader to investigate his political opponent.

To get an even clearer idea of how simple this scandal is, watch the video at the top of this story. And to watch more Vox videos, subscribe to our YouTube channel.