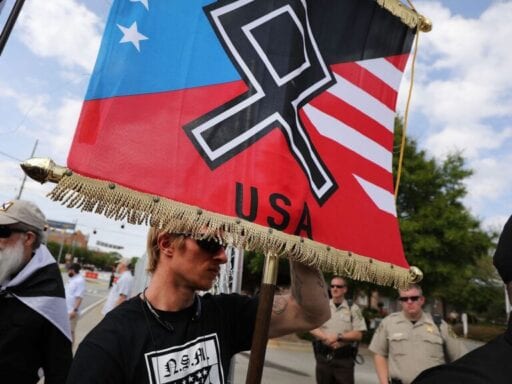 Multiple people were killed and injured in a shooting Saturday morning at a Pittsburgh synagogue — a shooting that comes amid an increase in anti-Semitic incidents in the United States.

The suspected shooter, a white male, has been taken into custody after surrendering to a SWAT team at the Tree of Life Synagogue in Squirrel Hill.

Local CBS affiliate KDKA reported that eyewitnesses heard the shooter shout, “All Jews must die” before firing during the morning shabbat service, the busiest time of the week for most synagogues.

No information about the shooter’s motive has been confirmed yet by authorities, and initial eyewitness accounts sometimes turn out to be wrong as the investigation unfolds. Still, this shooting comes amid a steady increase in anti-Semitic incidents and hate crimes since the 2016 presidential campaign season and, in particular, the inauguration of Donald Trump. The FBI found that in 2016, the most recent year for which data was available, there had been an increase of almost 5 percent in hate crimes since 2015, and 10 percent since 2014. Of the 1,273 crimes for which the FBI found a motivation of religious hatred (about 20 percent of the total), half were against Jews.

In the last year for which complete data is available, the Anti-Defamation League (ADL), an advocacy group dedicated to combatting anti-Semitism, found that there had been 1,986 reported anti-Semitic incidents in the United States that year, including acts of vandalism as well as physical violence. That figure was a 57 percent increase from 2016, which itself had seen a 35 percent uptick in incidents from 2015.

The surge between 2016 and 2017 was the highest increase in incidents on-record since the ADL started reporting on them in 1979. Between mid 2015 and mid 2016, as the 2016 presidential campaign reached a fever pitch, more than 800 journalists received a staggering 19,000 anti-Semitic messages on Twitter.

Incendiary rhetoric has remained intense throughout 2018. The verbal attacks against liberal billionaire philanthropist George Soros, who is Jewish, and whose political against activities have become the subject of a number of far-right conspiracy theories, have hit a fever pitch.

This month alone, Donald Trump publicly blamed Soros for funding the activist opposition to the nomination of now-Supreme Court justice Brett Kavanaugh, who was accused of multiple instances of sexual assault. More recently, Rep. Matt Gaetz (R-FL) as well as Kelly Johnson, an executive vice president for Campbell’s Soup, blamed Soros for financially supporting the Honduran migrant caravan making its way to the United States border, accusing Soros of being in control of migrants and refugees.

Soros was among the recipients of a series of mailed pipe bombs sent to prominent left-wing media outlets and politicians, including the Clintons and Barack Obama this week. A Florida man who openly aired his right-wing views on Twitter and elsewhere, Cesar Sayoc, was arrested Friday and charged for allegedly carrying out the bombings.

As Talia Lavin writes in the Washington Post, the rhetoric against Soros reflects a wider trend in anti-Semitic discourse: a conspiracy theory of imagined “globalists” secretly pulling the puppet-strings of the capitalist world order that has been a mainstay of populist rhetoric since at least the European Enlightenment. Lavin writes, Soros’s “name has become a synonym for a well-worn anti-Semitic canard: the idea that Jews are malevolent fomenters of social dissent, agitators slyly funding and masterminding protest, seeking to undermine a white, Christian social order.”

Should the Tree of Life shooter’s anti-Semitic motivations be confirmed, it would be a culmination of a week of extraordinary right-wing violence, from the series of pipe bombs targeting liberals, to the shootings near Louisville, Kentucky, in which a white man attempted unsuccessfully to enter a predominately black church before killing two black people at a Kroger supermarket.

In the fallout of this shooting, the New York Police Department announced it would deploy extra security teams to synagogues and places of Jewish interest throughout the city.

Thus far, Donald Trump has expressed a degree of sympathy for the victims of the synagogue shooting in Pittsburgh, tweeting “God bless all.” He later called the shooting “more devastating than originally thought” adding that he’d spoken with Pittsburgh’s mayor and Pennsylvania’s governor to inform them that the “Federal Government has been, and will be with them every step of the way.”

Ken Starr lamenting impeachments happening “all too frequently” is the death of irony
NASA has a new airplane. It runs on clean electricity.
Taiwan has millions of visitors from China and only 45 coronavirus cases. Here’s how.
ExxonMobil wants you to feel responsible for climate change so it doesn’t have to shoulder the blame
The dilemmas facing cancer doctors and patients in the coronavirus pandemic
Daylight saving time ends Sunday: 8 things to know about “falling back”