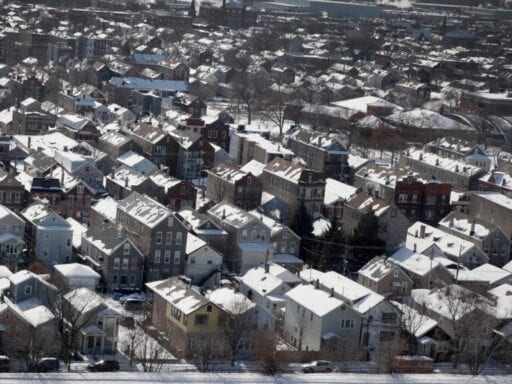 Leaky homes are energy hogs. Home energy audits can reveal how much.

It’s been a struggle to stay warm in the Midwest and Eastern US this week as the polar vortex has paid us a rather unwelcome visit. There have been at least nine deaths linked to the frigid temperatures, and utilities have struggled to cope with the spike in heating demand. Some utilities even asked their customers to turn down their thermostats.

Cold temperatures are not new to anyone who lives in these regions. But the severe chill this week has revealed that many buildings aren’t that good at keeping the cold air, and even the ice, out.

The INSIDE of my front door. Indiana cold pic.twitter.com/oQKcnHTOt2

It’s so cold the heater in my car has refused to work and the walls on the inside of the building are frosting. Also, the door is frozen shut. pic.twitter.com/P7t38xBFqE

You know it’s cold when there’s ice INSIDE the window and patio door. #chiberia2019 #PolarVotex pic.twitter.com/3hBoggzj6M

My wall is freezing in my bedroom. There are no pipes behind it. Chicago. from
mildlyinteresting

Leaky buildings like these are uncomfortable and drafty, yes, but also expensive. About 39 percent of all energy and 70 percent of electricity consumed in the United States goes toward buildings, both commercial and residential. That, in turn, contributes 11 percent of the country’s greenhouse gas emissions. And a lot of that energy goes to waste.

In commercial buildings, 30 percent of energy consumed is wasted. A study from the North American Insulation Manufacturers Association (make of the source what you will) reported that 90 percent of US homes are under-insulated.

The thing is, we know how to fix this problem. Installing double-pane windows, weather stripping, and insulation stands to take a huge bite out of energy bills and environmental impacts. According to the Environmental Protection Agency, homeowners can shave 15 percent off heating and cooling bills on average by properly sealing their homes.

The Natural Resources Defense Council reported that improving energy efficiency in homes is the single-largest intervention in cutting greenhouse gas emissions in the United States. By 2050, residential efficiency could offset 550 million metric tons of carbon dioxide emissions every year.

At the city level, stricter building codes are a key step toward making buildings more energy efficient. However, that only affects new structures. Much of what you already see outside your window will stand for decades. The average building will stand for more than 70 years, so retrofits are going to be a major part of the fight against climate change.

So rather than wishing for warmer weather outside, it would behoove homeowners to better seal themselves inside.

But where do I start, you ask?

The first step is to figure just how leaky and inefficient your home is. That entails an energy audit, where a professional examines your house room by room and assesses how you use space. It can involve using blowers, thermometers, and infrared cameras to detect leaks and other problems.

The auditor can then prescribe the steps to take, how much they’ll cost, and how much you’ll save over time. An audit can cost as much $400, but check with your utility provider. Many power and gas companies offer subsidies and rebates for these assessments and upgrades.

The federal government also has the Low Income Home Energy Assistance Program, which is pretty much what it sounds like. The Trump administration has twice tried to eliminate the $3 billion program that has served more than 6 million households, but Congress has kept funding in place.