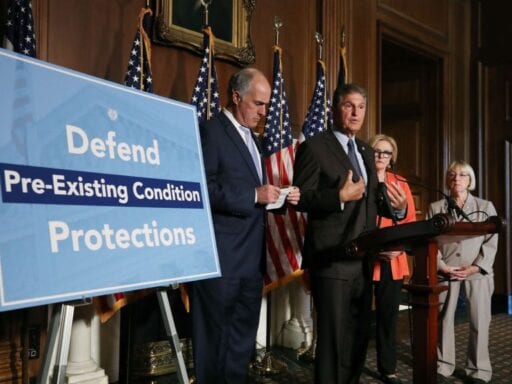 Joe Manchin loves preexisting conditions protections so much he literally picked up a rifle and gunned down the lawsuit that would erase them.

We’ve talked before about how red-state Democrats are focusing their campaigns on the Affordable Care Act, and particularly the law’s insurance reforms. But this ad takes it to a new level.

Six years ago, Manchin was blowing away a liberal proposal — cap-and-trade — for his reelection bid. But this year, he’s taking up arms to defend Obamacare.

Of course, the words “Obamacare” or even “Affordable Care Act” don’t cross the West Virginia senator’s lips. But his point is clear.

Manchin is the envy of his fellow Trump country Democrats, as the New York Times’s Trip Gabriel documented, polling nearly 10 points ahead of his Republican challenger on average.

For an explanation, look no further than the issue Mr. Manchin has made No. 1 in his campaign: health care, specifically protections enshrined in the Affordable Care Act, a once-vilified law that has grown increasingly popular now that its benefits are woven deeply into a state with high poverty and poor health. West Virginia has the highest share of its population covered by Medicaid, 29 percent, including about 160,000 who became eligible in the Medicaid expansion under the law.

Mr. Manchin, a former governor and the state’s dominant politician for more than a decade, rarely cites the law’s formal name, much less its toxic-for-West Virginia nickname, “Obamacare.”

But he has relentlessly raised the alarm over the potential loss of coverage for people with pre-existing conditions, about one in three West Virginians.

2018 is shaping up to be 2010’s inverse, with the ACA being perhaps Democrats’ best hope of retaking the Senate rather than the top culprit for why they lose it. It is a remarkable reversal of fortune for the law, which has enjoyed greater popularity since Republicans tried to repeal it last year.

But it’s more specific than that. Republicans repealed the individual mandate, and nobody except insurance actuaries really mourns its loss. Medicaid expansion isn’t any more or less popular than it was before — people like the program, and they’ll vote for it if it’s on the ballot, but we don’t really expect expansion to tip the Oklahoma or Tennessee governors’ races. They’ll be defined by other issues.

Nor are Manchin or Heidi Heitkamp or Joe Donnelly really going to bat for premium tax credits or the cost-controlling Cadillac tax, and certainly not the Centers for Medicare and Medicaid Innovation.

No, when vulnerable Democrats wield Obamacare as a political cudgel against Republicans, they have one very specific section in mind: Title I, the protections for preexisting conditions.

They are, without fail, the most popular part of the ACA when pollsters break out the law’s individual pieces. Two issues most directly felled the Republican repeal plans: the Medicaid overhaul and the rollback of those preexisting conditions rules.

“The political potency of the protections that emerged in the repeal and replace debate was somewhat unexpected,” Larry Levitt at the Kaiser Family Foundation told me. “Protecting people with preexisting conditions is now like motherhood and apple pie.”

I think it’s no accident that these provisions, the most absolute and universal within Obamacare, are the most popular. They appeal to a basic sense of American fairness: You shouldn’t be denied insurance because you once got sick or had an accident.

It helps too that 50 million Americans have a condition that would have made them uninsurable before the ACA. Each of us either is one of those people or knows one of them.

That also breaks down typical partisan barriers that might still hold for programs like Medicaid, which are— fairly or not — seen as a kind of welfare. Notice that Manchin, even in a Medicaid expansion state that is hugely reliant on Medicaid, is focusing instead on preexisting conditions.

I am reminded of something we heard from Trump voters last fall when we asked them about Medicare-for-all and the idea of health care as a human right.

“I do think that’s a human right to have access to health care,” said Kate, a 55-year-old with one child still at home. “It’s like having access to clean water, food, and everything. It’s a basic human right.”

Obamacare’s preexisting conditions rules are as close as the law comes to codifying that idea. In practice, it falls short, because not everybody gets premium tax credits and some states refused to expand Medicaid.

But health insurance is something you have a right to buy, no matter your medical history. Obamacare is built on that belief.

And that is the message that Joe Manchin and other vulnerable Democrats are clinging to in 2018. We should watch their success closely, not only to see how far the public has come but also to get a better idea of where our health care debate might be heading.

The weird hegemony of “birthday cake” flavor
Welcome to the world of craft weed
6 winners and 5 losers from a Succession where the unthinkable happens
The best $2,000 I ever spent: Whatever my grandmother needed this year
Trump’s “PRESIDENTIAL HARASSMENT” tweets are an insult to #MeToo
7 things everyone should know about Australia’s wildfire disaster