The polls are in: here’s who won — and lost — last week’s debate 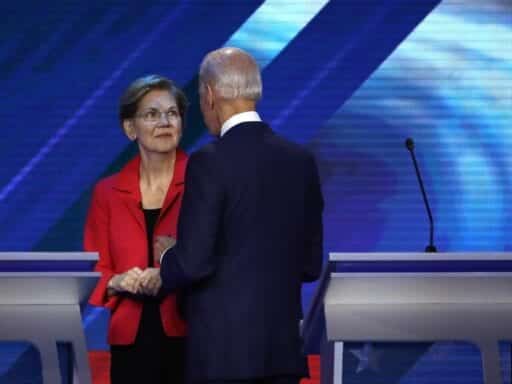 Here’s how Biden, Warren, Sanders, Harris, Buttigieg, and Yang have moved in the polls.

Joe Biden and Elizabeth Warren are the top two candidates in the presidential race, according to most polls taken since last week’s debate.

Of the five national polls taken since then, all show the former vice president continuing to lead, and four show Warren in second place — and Vermont Sen. Bernie Sanders in third. (The fifth poll shows Sanders in second and Warren in third).

A poll from NBC News and the Wall Street Journal shows Warren 11 points ahead of Sanders, but polls from HarrisX, SurveyUSA, and YouGov show her leading him by 1 to 4 points, and a Morning Consult poll shows her trailing Sanders by 2. On average, that’s a 3.2 percent margin for Warren over Sanders. That’s bigger than before, but it’s not clear whether it will hold up (or expand) in the coming weeks.

As for the other candidates, the worst news is for California Sen. Kamala Harris. Every new national poll shows her clearly falling behind the top three candidates. In fact, she’s barely ahead of South Bend Mayor Pete Buttigieg in two polls, tied with him in a third, and trails him in the other two.

And beyond the top five, Andrew Yang, Beto O’Rourke, and Cory Booker all have about 3 percent support each in national polls since the debate — a slight improvement for all three but not enough to bump any of them up to the top tier of candidates.

The big picture is that the debate may have solidified the shape of the field — with Biden in first and Warren and Sanders probably in that order behind him.

But one big question going forward is whether Warren will manage to put some distance between herself and Sanders, emerging as the clear second-place candidate rather than essentially tied with Sanders (as polling averages currently show).

What about early state polls?

All of this parsing of national primary polls is interesting enough, but there is no national primary; the contest instead will be shaped by early state results, starting with the Iowa caucuses.

Polling in Iowa, though, has been sparse in recent months. There have been some polls showing Warren actually winning there, but they tend to be from online pollsters without a track record of polling the caucuses so it’s unclear how much confidence we should place in them. Other polls continue to show Biden ahead.

The gold standard of Iowa polling is Ann Selzer’s Des Moines Register poll, which was reportedly in the field in recent days, so that should be an interesting result when it comes out.

For now, though, we have two Iowa polls that were conducted after the debate.

One, an online poll by Civiqs conducted for Iowa State University, shows Warren winning there with 24 percent, substantially ahead of the tied-for-second Biden and Sanders with 16 percent each, Buttigieg with 13 percent, and Harris 5 percent.

The other, a phone poll by David Binder Research for a Democratic group called Focus on Rural America, shows Biden winning with 25 percent, Warren close behind with 23 percent, Buttigieg in third with 12 percent, Sanders down in fourth with 9 percent, and, surprisingly, Minnesota Sen. Amy Klobuchar in fifth with 8 percent.

Both of these results are interesting, but each tells a different story, and neither are from nonpartisan polling organizations with a long track record. Hopefully, the Des Moines Register poll will come out soon and provide us with some more clarity.

There have been a few California polls as well

Changing gears, there have also been two polls of California conducted since the debate. This year, California’s primary will be on Super Tuesday (March 3). That places the nation’s most populous (and delegate-heavy) contest right after the early states, and due to early voting in California, voters there can cast their ballots weeks in advance.

SurveyUSA has a result that more or less mirrors national trends, showing Biden with 27 percent, Sanders with 18 percent, Warren with 16 percent, and Harris with 13 percent.

Emerson College, though, has a more unusual result, with Sanders and Biden tied at 26 percent, Warren at 20 percent, and Harris (the home-state candidate) all the way down at 6 percent.

There was also another poll by Capitol Weekly showing Warren winning, Sanders in second, and Biden in third — but it was mostly conducted before the debate. So basically, who the heck knows what is going on in California.

Why conservative Chief Justice Roberts just struck down an anti-abortion law
Congress’s count of the electoral votes, explained
Andrew Yang nailed his answer on being the only nonwhite candidate on stage
Scott Pruitt’s parting words to Trump: you are president “because of God’s providence”
Live results for Oregon’s drug decriminalization ballot measure
The 2019 fall movie season will be one for the history books