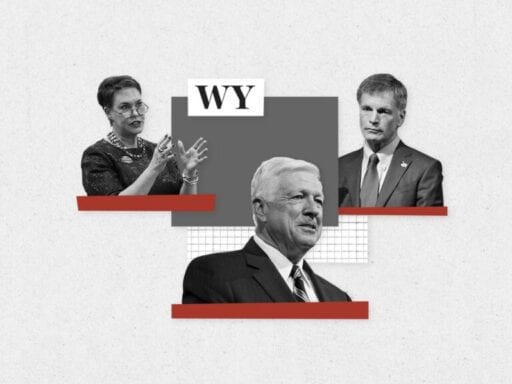 Three Republicans look like the top contenders to win the open governor’s seat.

Wyoming’s next governor will almost assuredly be picked in Tuesday’s Republican primary election, capping off one of the state’s most expensive campaigns ever.

Half a dozen Republicans are running to replace outgoing Gov. Matt Mead, one of the most popular governors in the country. Given Wyoming’s blood-red hue — this state voted for Donald Trump by nearly 50 freaking points — whoever emerges from the GOP primary is the next governor-in-waiting, barring some shocking twist in the next few months.

Friess, who got very rich running a mutual fund in the 1990s, has already put more than $2 million of his own money into his gubernatorial campaign. He’s trying to cross the line from being a major Republican donor — he regularly gives millions of dollars to GOP candidates in election years — to a Republican politician. He has notably gotten the support of Donald Trump Jr.

But several other candidates have raised $1 million or more; state observers say this could end up being Wyoming’s most expensive election ever. And Friess doesn’t seem to have pulled away from the field based on the polling we’ve seen.

A poll this month from the Trafalgar Group found Friess leading the GOP primary at 21 percent, but Gordon was right behind him at 20 percent. Hageman received 16 percent, Galeotos was just shy of 10 percent, and 20 percent of voters were still undecided.

In such a wide-open field, anything could happen on primary day. But Friess has spent a lot of money to buy his ticket to the governor’s mansion.

Democrats have to run their primary, too, of course, even if none of the prominent election forecasters give them even a snowball’s chance of winning the November election.

We don’t have any polling, but Mary Throne is a former Democratic leader in the state legislature who has the support of some of the top Democrats in the state and has raised the most money — if there is a frontrunner, she’s probably it.

Her competitors don’t have quite the same profile: Ken Casner ran and lost a campaign for the state legislature in 2016. Rex Wilde had a failed Senate bid in 2014, and Michael Allen Green rounds out the field.