The push for Joe Biden to choose a black woman as his running mate, explained 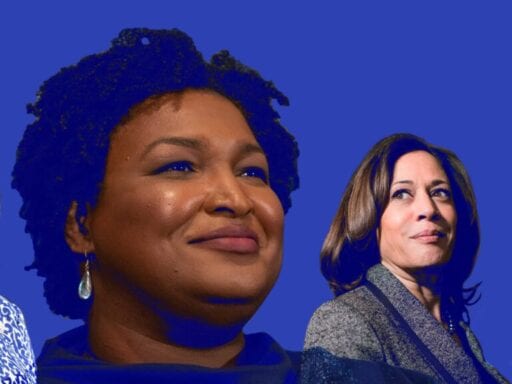 Some Democrats are looking for more representation on the ticket — and a vice presidential pick who will boost turnout.

As former Vice President Joe Biden’s search for a running mate heats up, the pressure is growing on him to pick a black woman for the role.

“I certainly agree with my colleagues who have said a woman of color, but specifically an African-American woman,” Rep. Alma Adams (D-NC) told CBS News. “Knowing the support that we have always given to this party. We have carried this party for as long as I can remember.”

Former Georgia gubernatorial candidate Stacey Abrams, one of the women vying for the job, laid out this call explicitly in an interview last week as well: “We need a ticket that reflects the diversity of America,” she said.

There are several reasons Democrats are making this push: There’s a desire for more representation on the presidential ticket, a sense that Biden owes much of his success in the primary to the support of black voters, and the possibility that a black running mate could help spur higher turnout in November.

But not everyone is convinced: Historically, vice presidential picks have not had a major impact on the electoral outcomes in presidential races, and some think Biden already has strong support from black voters and needs to ramp up outreach in other ways.

There are questions, too, about how desirable the post may be for some of the Democratic Party’s most celebrated women, given the bind they face when it comes to allegations of sexual assault that have been brought against Biden by former Senate staffer Tara Reade. (The campaign has denied these allegations.)

Biden, a 77-year-old white man, emerged with the presumptive nomination from the most diverse field of candidates the Democratic Party has ever seen, and his ultimate choice of running mate will send a clear message: It says something not just about his strategy for the general election but about what the future of the party could look like.

“We started out the Democratic primary process with the most diverse contenders in our nation’s history and that says something about the appetite of the electorate and our interest in diverse leadership,” said Glynda Carr, the president of Higher Heights, an organization dedicated to supporting black women running for office.

The case that some Democrats are making for choosing a black woman, briefly explained

There are several reasons experts have cited for Biden to choose a black woman as vice president: Doing so would acknowledge the range of voices in the party, give a nod to how black voters helped boost him in the primary — particularly in the critical state of South Carolina — and inspire greater voter turnout.

Some of the top names that have been circulated include Abrams, Sen. Kamala Harris (D-CA), and Rep. Val Demings (D-FL).

Research suggests that vice presidential picks haven’t had an explicit impact on electoral outcomes in the past, but a couple of factors make this cycle different: Because of Biden’s age and the possibility that he may not pursue a second term, his choice of running mate has taken on greater importance.

The potential impact that a vice presidential pick could have on increasing black voter turnout, especially, is seen as a major argument to run a more diverse ticket.

“The strategic considerations that might impel Biden to pick a black running mate would be driven by the abysmal turnout among registered black voters in Michigan, Wisconsin, and Pennsylvania in 2016,” Columbia political science professor Donald Green tells Vox.

Across key battleground states including Michigan and Wisconsin, turnout rates dipped among black voters between the two cycles as well.

President Barack Obama’s groundbreaking candidacy in 2008 and 2012 was viewed as a significant reason for higher black voter turnout in both cycles — and the historic choice of a black woman as vice president could possibly lead to a similar uptick.

“It would be good to have a woman that looks like the rest of America: smart, gifted, a fighter, a warrior”

“Many have questioned what the Democratic Party could do to return the electorate to the levels of turnout we saw in the 2008 election,” said Howard University political science professor Keneshia Grant. “I believe selecting a black woman to be the vice presidential nominee for the Democratic Party would do just that.”

According to the Niskanen Center’s Rachel Bitecofer, increased turnout from both voters of color and younger voters will be central to Biden’s efforts to defeat Trump. Given how close the final outcome was in 2016, higher turnout from black voters in these battleground states could ultimately make the difference.

There are other camps, however, pulling for a vice presidential pick who’s shown that they can perform well in certain battleground states, like in the Midwest. Although there’s no evidence to suggest that a candidate of color wouldn’t do as well in this region, some of the top names that have been floated in this context are white.

Those interested in a candidate with Midwestern experience, as Politico reports, lean more toward backing running mates like Sen. Amy Klobuchar (D-MN) or Gov. Gretchen Whitmer, who’ve already demonstrated that they can win in Minnesota and Michigan. Prominent progressive Sen. Elizabeth Warren (D-MA) has also been talked about as a high-profile running mate who could help Biden further establish his bona fides with the more liberal wing of the party.

When it comes to the voter bases he needs to reach, Biden has already performed strongly with black voters so there’s an open question of how much a black running mate would help him expand on this strength. In South Carolina, for example, 61 percent of black voters backed him in the Democratic primary.

Experts caution, however, that such support shouldn’t be conflated with enthusiasm for his candidacy. As Bitecofer emphasizes, black voters were also closely aligned with Hillary Clinton in 2016 but turnout was down because enthusiasm for the ticket was down.

Biden’s commitment to choosing a vice president based on gender — and the push for him to do so based on race — has led some critics to argue that he’s playing into identity politics in a way that obscures individual qualifications.

In the past, some Democrats have said that appealing to voters with “identity politics” around gender and race is not always effective and that doing so could push away swing voters. But there is nothing to suggest that the focus on a more representative candidate and one who’s qualified for the role are mutually exclusive.

Vice presidential picks historically haven’t mattered much, but this cycle could be different

An important caveat to all this is that vice presidential picks haven’t historically had a notable impact on the final electoral outcome, barring some specific exceptions.

As Vox’s Ella Nilsen reported, the research suggests that many voters don’t weigh the vice presidential pick that heavily in their final decision:

[Elizabethtown College’s Kyle Kopko] and [University of Dayton’s Chris Devine] analyzed election and voter data going back more than 100 years, and found vice presidential candidates usually only make a difference to the outcome of a general election when they are either very popular or very polarizing.

The Wall Street Journal in 2016 also analyzed years of election data and found that even when a vice presidential pick was viewed favorably by voters in their party, a majority of voters ultimately said the VP pick ultimately had no measurable impact on their vote for president.

The idea that Whitmer or Klobuchar could deliver their home states is thin as well, according to Devine and Kopko, who have for years studied the impact of vice presidential choices.

“We’re pretty skeptical of the home-state advantage too,” Kopko told Nilsen in a recent interview. “You have to make a lot of assumptions that someone’s going to feel so strongly about their home state, that’s going to override any partisan predispositions.”

At 78, Biden would be the oldest nominee to ever be inaugurated if he’s elected in November. He has said that he’s looking for a running mate who is able to lead the country “the day after they’re picked.” And there is one area where some experts think Biden’s pick could matter: A woman of color as vice president would boost the excitement around the ticket in a way that builds on Biden’s established base.

“Biden may have existing support, but he lacks enthusiasm,” says Aimee Allison, founder of She the People. “He won’t win unless women of color are inspired to organize our communities to get out the vote. Otherwise, this will just be a repeat of 2016.”

As previously noted, Clinton also had strong support among black voters, besting Biden’s numbers in South Carolina, though she still saw dips in turnout during the general election.

For now, Biden’s choice for vice president remains an open question. Regardless of who he chooses, the role will have massive implications: It will be a huge platform for whoever is picked, but it will also put them in the difficult position of having to align themselves with Biden on a range of issues — including the sexual assault allegation that’s been levied against him.

The Biden campaign has said this allegation is “false,” but as Rebecca Traister wrote in The Cut, whoever is selected as his running mate will likely be asked to answer for this as well.

According to a FiveThirtyEight analysis of the timing around past vice presidential decisions, Biden likely won’t announce his pick until early summer.

Deforestation in Brazil is out of control. Bolsonaro is asking for billions to stop it.
The Oscars’ new “popular film” category is a bad idea from a panicked organization
The Supreme Court’s “cursing cheerleader” decision, explained
This AI makes you look like a masterpiece — while teaching you about its own bias
Welcome to the Home Issue of The Highlight
Amazon may soon face an antitrust probe. Here are 3 questions the FTC is asking about it.