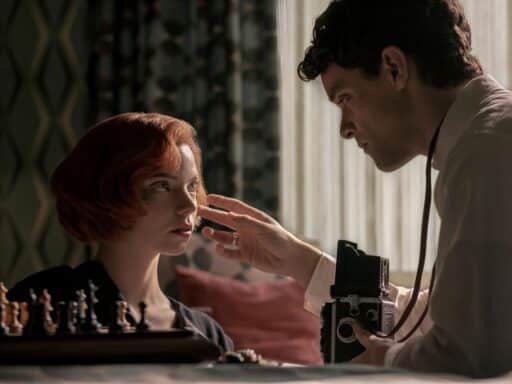 The problem with Netflix’s The Queen’s Gambit isn’t that Beth is too pretty. It’s how the show handles her prettiness.

Since the limited series The Queen’s Gambit premiered on Netflix in October, it has become one of the streaming network’s biggest original hits. The Queen’s Gambit has dominated Nielsen’s top 10 list and, according to the NPD Group, is responsible for an 87 percent jump in sales of chess sets over the three weeks following the show’s premiere, along with a corresponding 603 percent jump in sales of chess books. It is a bona fide cultural phenomenon, and a respectable critical hit to boot.

But viewers of The Queen’s Gambit have never quite managed to agree on a central question. Everyone can see that the show is presenting itself as good old-fashioned prestige TV — the sumptuous production design, the lavish period detail, the heavily internalized and literary character psychology, those are all dead giveaways.

Here’s another way of asking that question. Is The Queen’s Gambit a show where all the production trappings and good acting and showy camera tricks are telling an emotionally resonant and thematically rich story? Or is it a show in which all of that expensive surface-level good taste coheres into something that might be pleasurable to watch — but is ultimately hollow, with nothing going on below the surface?

Critics can’t seem to form a consensus. At Vulture, Jane Chu calls The Queen’s Gambit a “fake deep period piece” and “the Forrest Gump of chess,” while at the New Yorker, Rachel Syme calls it “the most satisfying show on television.” Mike Hale perhaps best summed up the general ambivalence on the show when he wrote at the New York Times, “In the end, it was an admirable package that I wanted to love more than I did.” The Queen’s Gambit seems to be — oddly, for a miniseries that’s mainly about a girl who is good at playing chess — critically polarizing.

To find a way into the middlebrow versus highbrow question, I’d like to narrow our scope down for a bit. Because there’s one very specific lens critics have been using in all these discussions of whether or not The Queen’s Gambit is actually good. And that is what it means that Anya Taylor-Joy, who plays main character Beth Harmon, is so darn pretty.

There’s a surprising amount at stake in that question.

Anya Taylor-Joy, her enormous eyes, and the purpose of beauty in a period piece

The Queen’s Gambit gives you plenty of time to notice that Taylor-Joy is pretty, because the show lives and dies by closeups of her face. The bulk of the action comes from lonely Beth Harmon traveling from chess tournament to chess tournament throughout the 1960s, dominating her opponents and humiliating men every time she turns around. And the central way the show dramatizes the action of those tournaments is by showing us Beth sitting down in front of a chess board, locking her giant eyes on her opponent, and flicking a piece forward.

Then she balances her chin on her hands, and the frame closes in on her. And we are presented with a long and unbroken gaze at Taylor-Joy’s exquisite bone structure and her enormous, staring eyes.

Is Beth afraid? Is she contemptuous? Is she flirting? Taylor-Joy’s face is so implacable — it’s a movie star face, a model’s face — that in the audience, we find ourselves projecting wildly upon it. She could be feeling anything and we would believe all of it: The only thing that’s clear is that whatever she feels, she feels it deeply. Otherwise why would her eyes be so huge?

Critics by and large agree that this camera trick, and its corresponding emphasis on Taylor-Joy’s beauty, works as a way of making chess feel exciting, intimate, and even sexy.

“The way these matches are shot — through faces, posturing, and lingering — feels shockingly intimate. The constant shifting from locked gazes to averted eyes feels almost voyeuristic to intrude upon,” writes Tracy Moore at Vanity Fair. Moore notes that “the power of all this has everything to do with Taylor-Joy’s self-possession, which has a deer-like speed, grace and innocence, only led by darting shark eyes.”

Taylor-Joy’s eyes “are enormous, infinite vessels of expression,” writes Jen Chaney at Vulture. “They are larger than planets, larger than galaxies, so large that she makes traditional animated Disney princesses look as if they’re squinting.”

Sarah Miller argues that Taylor-Joy’s prettiness combines with Beth’s aura of competence to create a character with no apparent vulnerabilities. “She doesn’t need chess to survive,” Miller writes for the New Yorker. “She’s a confident girl who finds everyone annoying and wears great clothes and flies off to beautiful places to be weird around guys. If she didn’t play chess and weren’t such a bitch, it would be Emily in Paris.”

At Vulture, Jane Hu argues that a great period piece should make the past feel both attractive and — morally, ethically, culturally, because of what we know now, because of what we have all lived through since that more innocent past — utterly inaccessible. “They should not make one feel: ‘I want to go to there,’” she writes. “Instead, the effect is more like: ‘I can never go back there again.’”

For Hu, the palpable pleasure The Queen’s Gambit takes in both Taylor-Joy’s beauty and her lavish period surroundings blocks that disenchantment with the past from ever truly landing. “Even [Beth’s] frequent spirals into addiction … no longer register as moments of concern, so much as opportunities for cinematographic play while Taylor-Joy stumbles around in her underwear,” Hu writes. “Everything potentially traumatizing or problematic gets actively taken up as fodder for beauty.”

When I consider that question, I find myself less interested in the fact of Beth’s beauty than I am in The Queens Gambit’s relationship to it. It’s not “is she too pretty,” but “is her prettiness wielded effectively?”

I don’t think it is.

There’s a difference between fantasy that subverts and fantasy that reaffirms. I don’t think Queen’s Gambit knows that.

Let’s go back to that recurring closeup shot, the one of Beth balancing her chin in her hands as she stares down her opponent. It’s an exciting shot, and it’s part of what makes chess in The Queen’s Gambit feel sexy and compelling.

But it is also inviting us to gaze at Taylor-Joy, her beauty, and her inaccessibility in an ever-so-slightly leering way.

The Queen’s Gambit consistently seems to take this sort of proprietary pride in Beth’s beauty: See, here is this gorgeous creature we have built and are serving up, just for you. Look at her win these chess games with her glossy coiffed hair. Look at her spiral downwards in her gamine underwear and her perfect smokey eye makeup while the camera lingers on her long, bare legs. Don’t you want to just eat her up?

For this show, the fact that Beth is both smart and a babe is a source of continual astonishment, as though it somehow missed the entirety of ’90s pop feminism devoted to proving that it’s okay for women to be both hot and smart. Chess reporters gawk at her sleek good looks and assume she must be a bad player because she is so beautiful; mean girls at her high school gawk at her chess magazines and assume she must not care about how she looks because she is so smart.

So beautiful and so smart is Beth that The Queen’s Gambit treats her as a mythical creature of sorts: the rare woman who is Both. “You could never be a model,” one character tells Beth. “You are pretty enough, but you are much too smart. Models are empty creatures. The camera lens fills them with color and texture, and, once in a while, even mystery. But just like there is no mystery to a vacant lot, it is just there until you put something interesting on top of it. Models are the same. They are just what you put on them.”

Moreover, all of the men of The Queen’s Gambit are similarly astonished: as awed by Beth’s simultaneous beauty and brilliance as we in the audience are asked to be. If at first they are threatened by her inarguable superiority, they rapidly capitulate before her, all the while overwhelmed by her prettiness. She’s so hot and so good at chess she practically turns a gay man after she humiliates his rook. “You really are something,” he tells her, looking her up and down.

Nor do the men of The Queen’s Gambit ever resent Beth for her icy and withholding beauty, her alien smarts. Instead, they respect her. The first two men ever to underestimate her at her first tournament become her groupies, and the first local chess champion she ever defeats languishes in unrequited love for her. When she travels to Moscow to play against the Soviet chess players — the best in the world, we’re told — her posse of American boy toys stay up all night plotting winning strategies for her to use. One of her humiliated Russian opponents resigns by kissing her hand.

This happy state of affairs is, it should go without saying, not quite an accurate depiction of the state of gender politics of actual chess. “They were too nice to her,” female chess champion Judit Polgar told the New York Times of the way fictional men treat fictional Beth. In real life, Polgar recalled the men who “refused to shake hands” after she beat them, the one “who hit his head on the board after he lost.”

The Queen’s Gambit is not supposed to be a documentary, and there is nothing wrong with indulging in the fantasy of a world in which men respect women enough to be supportive and complimentary after women show more skill and talent than them, even if that’s not the world in which we actually live. But I don’t think that fantasy is quite what Queen’s Gambit is giving us.

Because the show’s insistence on Beth’s beauty, and specifically on Beth’s beauty as something that makes her matching intelligence even more remarkable, creates the idea that what is valuable about Beth is not just her brilliance. The fact that she is both brilliant and beautiful is where her value lies. The former without the latter would be sad and empty. But together they make her something.

There is a potent fantasy embedded within this story. But it is an empty fantasy that reifies preexisting power structures rather than critiquing them. The story it tells is not “this woman is so brilliant that she is able to smash through the barriers of engrained structural misogyny,” but, “this woman is so beautiful that the barriers of engrained structural misogyny simply topple before her.” Beth becomes the exception that allows the patriarchy to continue functioning, rather than the rule-breaker that shows us why the patriarchy should crumble.

This conservatism, this failure of imagination, persists all the way through The Queen’s Gambit. It is the fault line running through the show’s exquisite surface-level imagery. It is the rotten hollow at the heart of the show. It’s why, in the end, The Queen’s Gambit fails to ever quite become great.

The Queen’s Gambit is beautiful to look at. But it does nothing with its beauty except ask us, again and again, to eat it all up.

How Harry Potter changed the world
Amy Klobuchar is tempting some Biden supporters in New Hampshire to change their minds
Women with endometriosis have terrible pain. There’s finally a new treatment.
Bernie Sanders got more young voters in New Hampshire than everyone else combined
The Equalizer 2: Denzel Washington as a superhero should be more fun
Amber Guyger’s lawyers have taken the first step toward appealing her murder conviction