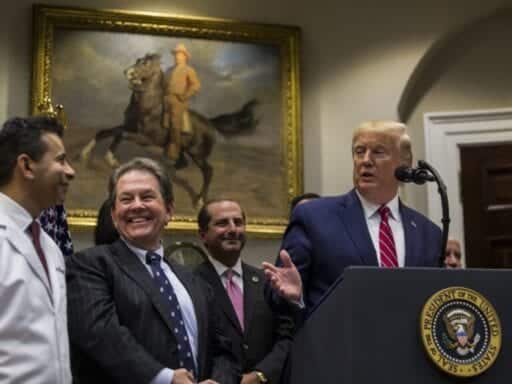 President Donald Trump made a trip to Walter Reed National Military Medical Center in Bethesda, Maryland, as White House press secretary Stephanie Grisham put it, to “begin portions of his routine annual physical exam” on Saturday. But there are indications the trip wasn’t as routine as the White House would have the public believe.

To be clear, there’s no hard evidence that Trump’s trip to the hospital was anything more more than a 73-year-old man being proactive about his health. But the White House’s complete lack of credibility on issues from crowd size to foreign affairs makes it disconcertingly easy to disbelieve what officials say.

While there would likely be fewer questions surrounding Trump’s health if the White House hadn’t long established a reputation for lying about everything, there are a number of indicators that something out of the norm went down on Saturday afternoon.

For one, in a break from precedent, Trump’s trip to the hospital wasn’t acknowledged ahead of time on any White House schedule. Secondly and similarly unusual, CNN reported that medical staff at Walter Reed weren’t notified of Trump’s visit in advance. White House pool reporters said they were told Trump’s movements on Saturday “were strictly unreportable” until he arrived at the hospital at 2:47 pm.

It smells fishy, and an unnamed “source familiar with the situation” acknowledged to CNN that the situation was “unusual” and did not follow protocol. Adding to suspicions, on Sunday, NBC’s Kelly O’Donnell posted a video of Trump being hustled into an SUV on his way to Walter Reed by a White House physician — a visual seemingly belying the notion that everything was fine and normal.

POTUS health. WH says Saturday trip to hospital was “routine” & he’s “fine” despite break from past practices. Here is glimpse of Pres Trump and what appears to be WH physician Sean Conley getting into motorcade. Watch. (h/t @WinstonNBC) pic.twitter.com/8ZynFF2ytQ

Nonetheless, the White House wants people to believe there’s nothing to see here. In a statement released shortly after Trump went to Walter Reed, Grisham claimed that Trump was merely “taking advantage of a free weekend here in Washington” to start his physical because he’s “anticipating a very busy 2020.”

But the notion that the famously doctor-adverse Trump — who in 2018 made headlines when it was revealed he personally dictated a glowing letter of health released by his personal physician during the presidential campaign — would use a sunny Saturday afternoon of the sort he’s often spent golfing to start his second physical in nine months seems unlikely.

For now, however, the public is left taking Grisham’s word for it — that the president is the picture of health. Upon Trump’s return to the White House on Saturday, she released another statement saying Trump “remains healthy and energetic without complaints, as demonstrated by his repeated vigorous rally performances in front of thousands of Americans several times a week.” But she provided no details about what tests Trump underwent at Walter Reed, other than to say they included “a quick exam and labs.”

Adding to the mystery, Trump has not been seen by a White House pool reporter since leaving the hospital, and he’s not expected to make an appearance in public on Monday either.

The president’s unexpected visit to Walter Reed hospital was Saturday. He was not in public view today. Reporters are not expected to see him tomorrow either, per his public schedule: pic.twitter.com/QmBAtfbX9S

Trump, however, was very active on Twitter on Sunday, including a tweet in which he acknowledged his trip to Walter Reed, claiming “everything very good (great!),” and adding that his physical will be completed next year.

People would be more willing to take the White House’s story about Trump’s Walter Reed trip at face value if officials hadn’t burned their credibility by snowing the public about topics ranging from unsubstantiated allegations of large-scale voter fraud to the president’s Twitter typos. And the administration already has a well-documented history of pushing dubious-at-best claims about Trump’s dealings with doctors.

Perhaps most memorably, after Trump underwent his annual physical in early 2018, presidential physician Ronny Jackson held a press conference in which he brushed off questions about Trump’s unhealthy diet and lifestyle and deadpanned that “if he had a healthier diet over the last years he might live to be 200 years old … he has incredible genes.”

REPORTER: How does a guy who eats McDonald’s & all those Diet Cokes & never exercises be in as good of shape as you say he is?

PHYSICIAN: It’s called genetics… he has incredible genes… I told him if he had a healthier diet over last 20 years he might live to be 200 years old pic.twitter.com/6zAPFioQ4D

Trump nominated Jackson to lead the Department of Veterans Affairs four months later, but that crashed and burned when Jackson was hit with a string of allegations of “overprescribing pills, drinking on the job and creating a hostile work environment,” as Politico put it. Early this year, however, Trump appointed Jackson to be his chief medical adviser and assistant to the president.

The same sort of hyperbole employed by Jackson during his infamous news conference was on display Saturday night, when Grisham went on Jeanine Pirro’s Fox News show for an interview in which the president was alternately described as having “more energy than almost anybody else in the White House” and “almost superhuman.”

After his most recent physical in February, physician to the president Sean Conley announced that Trump is in “very good health overall,” despite having health issues including clinical obesity and high cholesterol. We have no good reason to believe things have changed in the nine months since. But the unusual circumstances surrounding Trump’s trip to Walter Reed, combined with the White House’s broader crisis of credibility, have left people wondering.

In yet another statement about Trump’s Walter Reed trip released on Sunday, Grisham seemed to tacitly acknowledge the White House’s credibility problem by pointing out that there are occasions in which she hasn’t lied — the implication being that this is one of them.

“I’ve given plenty of on the record statements that were truthful and accurate — actively trying to find and report conspiracy theories really needs to stop,” she said, according to CNN’s Jeremy Diamond.

How to (temporarily) close a restaurant
Russia detained an American for espionage. Here’s what we know.
Time magazine’s cover isn’t bold or brave. It’s exploitative.
How mocking anti-Semitism got a Trump official falsely accused of actual anti-Semitism
Mark Zuckerberg on leaked audio: Trump’s looting and shooting reference “has no history of being rea...
Why movies went from 15 minutes to 2 hours