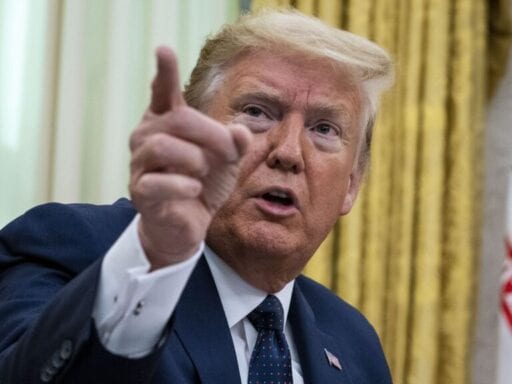 US President Donald Trump speaks in the Oval Office before signing an executive order related to regulating social media on May 28, 2020, in Washington, DC. | Doug Mills-Pool/Getty Images

Several prominent segregationists have used the phrase while cracking down on black protesters since the civil rights era.

On Friday afternoon, President Donald Trump attempted to backtrack on a tweet that appeared to threaten violence against black Americans protesting the police killing of George Floyd in Minneapolis, Minnesota.

Earlier in the day, Trump insinuated that he would bring in the military to quell any violence or looting if the situation wasn’t brought under control by Minnesota’s Democratic Gov. Tim Walz soon. “When the looting starts, the shooting starts,” the president tweeted Friday.

About 13 hours later, Trump tried to walk back the phrase on Twitter by claiming he meant that when looting starts, people end up getting shot. “Looting leads to shooting, and that’s why a man was shot and killed in Minneapolis on Wednesday night – or look at what just happened in Louisville with 7 people shot,” he tweeted.

….It was spoken as a fact, not as a statement. It’s very simple, nobody should have any problem with this other than the haters, and those looking to cause trouble on social media. Honor the memory of George Floyd!

Trump tried to brush off those criticizing his use of the phrase as “haters” who are “looking to cause trouble.” Notably, he did not try to walk back the use of the slur “thugs” in the same tweet.

This change of course — and refusal to admit such change — is an attempt by the president to gaslight the American public. Nowhere in his original tweets did he mention anyone getting shot. He also threatened to bring in the military to get the uprising under control.

The phrase, as many people on Twitter noted Friday, has racist origins dating back to the civil rights era. It was first said by then-Miami police chief Walter Headley in a December 1967 press conference announcing a new, tougher policy for policing the city’s black neighborhoods.

1/ This line in Trump’s tweet: “when the looting starts, the shooting starts”… is a quote from Miami Police Chief Walter Headley

In Dec 1967, months before riots at GOP Convention in Miami, Headley used that quote to announce “get tough” policy for policing black neighborhoods

“This is a war,” Headley said at the press conference in response to a recent rise in crime in the city. “We have the weapons to defeat crime. Not to use them is a crime in itself.”

Headley put in place an oppressive police regime, which included what we now call “stop and frisk” policies, extensive officer use of shotguns, and police dogs. “We don’t mind being accused of police brutality,” he was quoted as saying in the New York Times at the time. “They haven’t seen anything yet”

The brutal new tactics did initially result in a drop in crime, so much so that they were favorably cited in a House Select Committee report on Martin Luther King Jr.’s death (a portion of which blamed King for his own murder) in 1978.

But resentment over the oppressive police policy led to riots in the city after King’s death, and again in 1980 after a black man, Arthur McDuffie, was beaten into a coma by a white Dade County police officer.

Though Healey is often given credit for the phrase, professor Clarence Lusane of Howard University told WBUR that the phrase may have first been said by Eugene “Bull” Connor, a segregationist public safety commissioner in Birmingham, Alabama, who ordered the use of police dogs and fire hoses against black protesters.

Trump has a history of such tactics; several weeks ago, he claimed his comments about injecting disinfectant to kill Covid-19 were “sarcasm.” At a news conference in 2019, he lied so often — about everything from Labor Secretary Alex Acosta’s involvement in the Jeffrey Epstein case to whether Article II of the US Constitution gives him unlimited power — that Vox’s Aaron Rupar called it a “master class in gaslighting.”

This is the same president who flipped back and forth about white supremacist marchers in Charlottesville, Virginia, in 2017, saying there were “very fine people” among both the marchers and the counterprotesters.