The raging controversy over the NBA, China, and the Hong Kong protests, explained 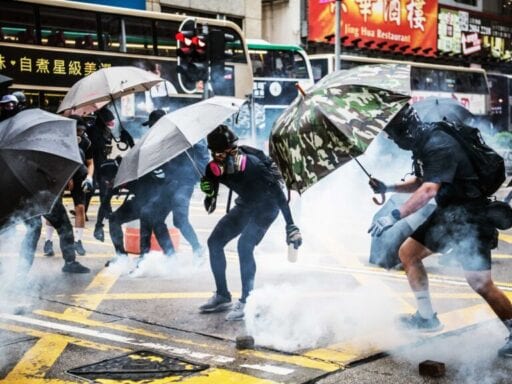 Share
Loading...
Protesters clash with police during a protest in Kowloon in Hong Kong, China, on October 6, 2019. | Laurel Chor/Getty Images

Globalization is exporting Chinese authoritarianism rather than American democracy.

On Friday, Daryl Morey, the general manager of the Houston Rockets, tweeted something a bit outside his lane as a sports guy but fundamentally banal in the context of American public opinion: “fight for freedom, stand with Hong Kong.”

Athletes and sports figures have sparked controversies for generations in American politics by wading into contested political issues. These controversies have only heated up in the Trump era.

But Morey turns out to have stepped onto a much bigger landmine — Chinese politics, just as the National Basketball Association grows more thirsty to get into the Chinese market.

Morey got himself denounced by the Chinese consulate in Houston and by the owner of his team. His tweet was deleted, the Chinese Basketball Association announced that it is suspending all cooperation with the Rockets, Morey was made to apologize, and the NBA put out a statement characterizing his tweet as “regrettable” and clarifying that his support for Hong Kong protesters “does not represent the Rockets or the NBA.” The Rockets are reportedly considering firing Morey in an effort to appease the Chinese.

Meanwhile, the NBA’s eagerness to squash a backlash in China is prompting its own backlash in American politics.

Ted Cruz, Beto O’Rourke, and Julián Castro were among those to swiftly denounce the NBA for giving in to Chinese denunciations.

We’re better than this; human rights shouldn’t be for sale & the NBA shouldn’t be assisting Chinese communist censorship.

The only thing the NBA should be apologizing for is their blatant prioritization of profits over human rights. What an embarrassment. https://t.co/bbiwCBTwc1

China is using its economic power to silence critics—even those in the U.S.

The United States must lead with our values and speak out for pro-democracy protestors in Hong Kong, and not allow American citizens to be bullied by an authoritarian government. https://t.co/87U4jgsAAp

Washington is otherwise consumed with investigations of Donald Trump’s corrupt activities and counter-investigations aimed at proving wild conspiracy theories, so the bipartisan nature of the backlash is a testament to international conflict’s enduring ability to bring people together.

But it’s also quite broadly illustrative of a much larger issue. Once upon a time, the American people were promised that the integration of China into the global economy would promote freedom and democracy there. That promise has not been borne out. And the Rockets ownership and the NBA as a league are giving us a vision of the frightening possibility that the reverse will happen, and American capitalists’ eagerness to please the Chinese government will become a threat to freedom at home.

The greatest Chinese basketball player ever played for the Rockets

The story behind all of this is that back in 2002, the Houston Rockets used their No. 1 draft pick to select a Chinese player, Yao Ming, a 7’6” giant who was also an unusually adept mid-range shooter for a big man of his era.

Yao was the first-ever foreign player to be selected with the No. 1 pick who hadn’t first taken a detour into playing NCAA basketball. And while by 2002, NBA teams were accustomed to drafting players with experience in European basketball leagues (some of them born in Europe, others from South America or Africa), the level of competition in the Chinese Basketball Association was not well understood or well respected.

Yao faced considerable skepticism from American sports fans (Bill Simmons labeled him “a disaster waiting to happen”) and his entry to the league was not without its share of cultural miscues, like a promotion for his debut game in Miami where the Heat passed out fortune cookies to the fans, seemingly unaware that fortune cookies are an entirely American invention.

But Yao turned out to be good (though he admittedly struggled with injuries) and his Rockets teams routinely made the playoffs.

Chinese basketball fans followed his career closely. But critically — and somewhat unexpectedly — Chinese Yao fans became Houston Rockets fans. By 2006, the bestselling basketball jersey in China wasn’t Yao’s — it was Tracy McGrady’s. McGrady was an African American wing player with no connection to China other than that he played on the same team with Yao. It’s typical for wing players to be more popular with fans than big men, so in the abstract there’s nothing particularly surprising about McGrady rather than Yao being the Rockets’ big star. But the fact that Chinese loyalties transferred so rapidly to Yao’s teammate laid the foundation for an enduring business relationship not just between the NBA — which has an audience in many foreign countries — and China, but very specifically between the Rockets and China.

Yao retired in 2011, but the Rockets are still the second-most popular team in China (behind the Golden State Warriors who’ve dominated the league in recent years) and their games were routinely shown on Chinese state television — at least until the current controversy, which has CCTV saying they’re cutting the Rockets off.

These are, of course, in practice somewhat different things.

Chinese public opinion exists in a context that is profoundly shaped by government control of television broadcasting; government censorship of the internet and domestic publishing; and an overall situation in which even people with access to outside sources of information know better than to publicly relay an understanding of world events that’s at odds with the government’s official line. So any backlash among Chinese fans to Morey’s tweets would necessarily be a reflection, in large part, of the Chinese government’s own propaganda efforts. It’s the Chinese government that has worked to convince the Chinese public that the Hong Kong protesters are leading a foreign-backed separatist movement rather than standing up for rights they were promised under the terms of Hong Kong’s reunification with China.

At the same time, by most accounts, grassroots nationalist sentiment in China is authentic and sincerely felt by the Chinese mass public — albeit felt in large part as a result of government policy.

Consequently, American companies eager to march to the tune set by the Chinese leadership can always point to the more respectable-sounding desire to cater to the views of Chinese people and be not necessarily incorrect. That said, this isn’t how globalization was supposed to play out.

Globalization was supposed to promote democracy in China

Back in 1999, then-President Bill Clinton signed legislation establishing Permanent Normal Trade Relations with the United States and paving the way for China’s entry into the World Trade Organization. This was intended primarily as an economic policy measure, and indeed it turned out to have much larger economic effects (both for good and for bad) than the Clinton administration anticipated.

But Clinton also argued in his statement celebrating the signing of the bill that “China is not simply agreeing to import more of our products; it is agreeing to import one of democracy’s most cherished values: economic freedom.” Economic freedom, he believed, would lead to political freedom. “The more China liberalizes its economy, the more fully it will liberate the potential of its people,” Clinton said. “And when individuals have the power, not just to dream but to realize their dreams, they will demand a greater say.”

Oftentimes, this was tied to a specific theory about the internet and modern communication technology.

In October 2000, Thomas Friedman, the influential New York Times foreign affairs columnist, wrote that “the leadership here knows that you can’t have the knowledge that China needs from the Internet without letting all sorts of other information into the country, and without empowering more and more Chinese to communicate horizontally and create political communities.” His view was that China would face a sharp choice: either stay poor and authoritarian, or else get rich by embracing modern technology and letting in the flow of information.

Nobody was necessarily promising a rapid march to democratization. But the consensus view of the American establishment was that economic integration between China and the West — and China obtaining prosperity through the adoption of western technology — would at least directionally shift Chinese politics in a liberalizing direction. In practice, the opposite seems to have happened.

First, simply on a technical level, it turns out that utopian globalization proponents were massively understating the feasibility of building a censored version of the internet.

Second, they underrated the extent to which the entirety of the modern technology industry would end up looking like a massive surveillance machine. In the specific context of western capitalist economies, that’s largely a privatized surveillance machine whose goal is to deliver targeted advertisements. But the same mechanisms that let internet ad brokers know I’ve been considering buying a new wallet and planning a family beach vacation in Mexico this coming winter can (and are) used by authoritarian regimes for political purposes.

Consequently, Chinese authoritarianism seems to have been — if anything — strengthened by modern digital technology. It’s easier than ever to know where everyone is at all times and who they are talking to.

Last, as Bill Clinton predicted, as China has gotten richer they now “import more of our products.” That means American companies are changing what they do to access the Chinese market. It’s become increasingly common for Hollywood studios to bend over backward to appease the Chinese authorities. The Tilda Swinton character “The Ancient One” in the Marvel Cinematic Universe, for example, is specifically a Tibetan monk in the comics. Screenwriter Robert Cargill says she was transformed into a white woman of no specific national origin or religious tradition because otherwise there’s the risk of “the Chinese government going, ‘Hey, you know one of the biggest film-watching countries in the world? We’re not going to show your movie because you decided to get political.’”

In a practical sense there probably isn’t very much the United States can do to prevent the Chinese government from repressing Chinese culture and there never would have been under any sort of policy choices. But the intermingling of the US and Chinese economies that was supposed to generate liberalization in China instead seems to be leading to the erasure of Tibet from American cultural products.

The Morey incident is a further intensification of that trend. Nobody was talking about the Rockets addressing the situation in Hong Kong during the game or flying a “stand with Hong Kong” banner in the arena where a global television audience could see it.

What happened was simply that a high-ranking Rockets executive offered an opinion on the subject in English on a platform that’s banned in China. In effect, the Chinese government is trying (and seemingly succeeding) in getting the NBA to censor participation in the American public square.

In theory, the same logic could lead China to trawl the social media posts of every employee of every Western company that does business in China and start making complaints. Obviously in practice they’re not going to start worrying about the tweets of random Apple Store employees tomorrow. But what happened to Morey is disturbing in large part because it’s not at all clear how far this slope will slip.

Poll: Amy Klobuchar made the biggest gains with voters at the debate
Trump, Biden, and the war over American masculinity
California will require solar panels on all new homes. That’s not necessarily a good thing.
9 movies and shows that explain how America’s justice system got this way
Meatless meat is going mainstream. Now Big Food wants in.
Kurt Volker, impeachment witness requested by Republicans, debunks many of their arguments