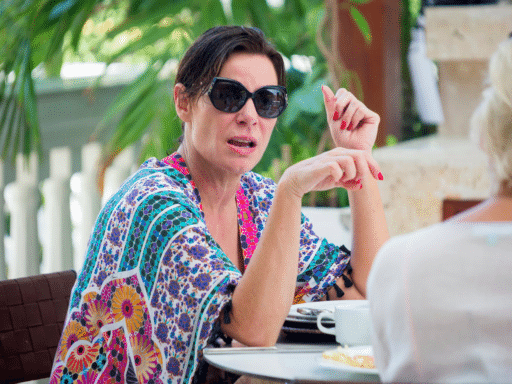 If you like rich ladies who act messy and literally poop the bed, this season is for you.

Like photos on online dating apps, Bravo’s Real Housewives betrays the reality of the situation. There’s nothing “real” about the stars of the network’s long-running franchise other than that the women Bravo and executive producer Andy Cohen have assembled are living, breathing humans.

They aren’t so much a circle of friends as they are cast members bound by contracts: Every time a new housewife is absorbed into the rolling snowball of a franchise, she’s introduced as some friend that we’ve never seen before, even though we’ve seen most of the people the cast has hung out with over the last few seasons. They also aren’t housewives: Many of women on Real Housewives series like Orange County and Atlanta are divorced, and on the current season of New York City, none of the housewives is currently married.

But after years of watching the franchise’s various series, I’ve come to realize that I don’t mind being lied to.

When our days are brimming with news about threats of nuclear war, election-rigging, Paul Manafort’s weird clothes and various alleged crimes, alt-right smear campaigns, conspiracy theorists, cryptozoological erotica, fire consuming the planet, and miles of sea trash, the only thing that I want to watch at night is something that will massage my brain to mush. And this season of Real Housewives of New York City has risen to the occasion spectacularly.

Led by Bethenny Frankel, a business owner who made her fortune tempting women (and men) with the promise of low-calorie beverages that will still get you drunk, the women this year have given the decade-old series what might just be its best single season yet.

It takes a special kind of person to be okay with appearing on a show that’s designed to bring out the ugliest in you. All these women, despite their surface differences, share this trait, and that’s part of the appeal: watching irrationally rich women drop their facades of elegance and sophistication to reveal their ugliest selves in an attempt to — and this is the fantastic twist — remain relevant enough to stay on for another season.

That appeal has grown ever-stronger during a season that also featured a night when two fights broke out at the same dinner on opposite sides of the table, and, like a tennis match, the cameras had to swivel to keep up with the beauty of what was happening. But the zenith of this season was this week’s “Ship It,” a glorious pocket of 40-something minutes in which a housewife literally shitting herself is the third subplot of the episode.

The reason this season of RHONY was so anticipated among Housewives fans has to do with the real-life stuff that happened to the cast between seasons. Usually, the big events that happen on reality shows (especially competitive reality shows) remain under wraps, thanks in large part to NDAs. But the Real Housewives is an exception, since the messiness of their own lives — divorces, bankruptcies, foreclosures, lawsuits et. al. — tends to be public knowledge, thanks to ongoing tabloid coverage of them between seasons. These incidents often become plotlines on the following season, turning reality into a teaser of what to expect on the show.

And by Real Housewives standards, reality this year was the equivalent of a trailer for Marvel’s Avengers: Infinity War.

In February, Page Six reported that the RHONY cast was stuck on a “cruise from hell” in Cartagena, Colombia. “They all thought they were going to die and they were hysterical,” a source told Page Six. “Bethenny [Frankel], Ramona [Singer] and Dorinda [Medley] were soaked and screaming hysterically, Carole [Radziwill] and Tinsley [Mortimer] were literally throwing up from seasickness. They were far out to sea and they thought they were going down like the Titanic.”

When this report published, Housewives fans immediately began calculating just how many days until it would be until the premiere on April 4, and the additional calculus needed to determine at what point in the season the cast would be taking their ill-fated boat trip. And this week, on the steamy first day of August, the cruise from hell appeared like an off-season Christmas present.

As is the case with so many reality-based series, the unsung heroes of Real Housewives are the editors. Knowing that everyone was tuning in to see their housewives in an infernal situation, they made sure to include moments where some of the women had second thoughts about going on the boat ride.

“Get off the island is what you’re going to be saying,” Sonja tells Luann in jest.

“Can we cancel the boat trip?” Carole asks the women shortly after a fight erupts at breakfast.

“I think I’m just gonna stay and go into town,” Dorina says, after playing her part in said breakfast fight.

Foreshadowing the cruise with lines like this gave “Ship It” the feeling of a horror movie, full of dread-soaked portent. More than the event itself, the lead-up to the cruise provided the episode’s main tension, taking advantage of viewers’ knowledge that everyone we’re watching go against their guts will soon be puking them up.

The twist: there actually wasn’t much footage of the boat ride from hell

To be quite clear, I don’t think anyone tuning into “Ship It” was hoping for anything bad to happen to the housewives that goes beyond a fall into a bush or some consensual buggery by a man dressed as a pirate. No one looking forward to the cursed cruise was wishing for real harm to come to these housewives; no one really wanted any housewife to die on that boat.

What we do want to watch is these women reacting to mildly preposterous situations. After all, they are masters of turning the most first world of problems into storylines. For example, this season Bethenny and Carole are fighting over Bethenny saying that Carole’s boyfriend asked to be comped during a relief trip to Puerto Rico and that Carole is being “too cool” on Instagram.

Watching these rich women puking and sobbing on a fiery luxury liner in the choppy waters off of Cartagena, Colombia was supposed to be a bonanza of such first-world freakouts. But while there was some footage of various members puking and getting rocked by waves, Bravo put up a title card in the middle of the show (above) that said they had to stop filming when the situation became too dangerous (though there was some audio of the housewives’ screams that survived the storm). The boat ride from hell had gone from main attraction to bonus feature.

But that inconsequentiality is part of the sly beauty of the Housewives franchise, where the draw is precisely that nothing too serious ever happens. You never feel like any episode needs to be watched right here and now — the plot will never leave you behind. And you don’t need to watch every episode, or even pay close attention to what’s happening on screen, to know that someone is fighting with someone else over something impossibly superficial. That never changes.

With the exception of a few women like Bethenny and Atlanta’s NeNe Leakes, who broke into mainstream success and then retreated back into the cushy world of Real Housewives, the housewives are in a holding pattern of petty dramas and jagged cross-talk, perpetually auditioning for the next season, when they will reset and sharpen themselves up for another round robin of bickering and alliance-building.

And when reality — or the cameras that fail to capture it amid choppy waters — doesn’t provide enough drama to keep the Real Housewives engines purring, the series and its cast know precisely how and when to goose the situation.

At the end of “Ship It,” we’re told that the women, allegedly the upper crust of Manhattan, are stricken with diarrhea, inciting a rash of toilet paper thievery and sweaty rushes to the bathroom. Luann, the tallest housewife, shamelessly reveals to the women as they file into the cab to go to the airport that she defecated in her own bed, as the camera wistfully pans to the poor woman scrubbing away the last of the housewives’ brief reign of terror. Luann chuckles as she tells the story, clearly happy to get back New York City and bid goodbye to Cartagena. She isn’t the least bit sad or regretful about a vacation that brought her fights and left her almost-shipwrecked and diarrhea-stricken. Why would she be? It made for memorable TV.

How “America First” ruined the “American dream”
Netflix’s The Haunting of Bly Manor is a calm, loving study in how to exorcise your ghosts
Trump has apparently wanted to kill Soleimani for quite a while — since as far back as 2017
The unwarranted controversy over AOC’s nomination of Bernie Sanders, explained
Letitia James wins the New York attorney general primary. She could be the first black woman ever el...
Bernie Sanders and Jeff Merkley have a plan to protect you from facial recognition