The real story behind this Harry Styles album cover 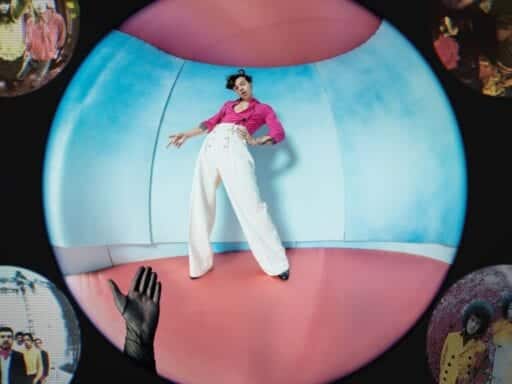 The fisheye album cover is a modern music staple.

When Harry Styles released the album cover to his sophomore project, Fine Line, fans began dissecting everything about it. But any music lover might recognize something about its cover too. The distorted circular image might remind fans of 1990s hip-hop music videos, or psychedelic rock fans of iconic album covers of the ’60s and ’70s.

The photograph was taken with a fisheye lens, a novel piece of gear that has excited amateur and professional photographers alike for over half a century. It’s been used to document Apollo missions, presidential funerals, baseball games, and protests. But, perhaps its greatest strength was making rockstars seem larger than life.

Nikon’s first commercial fisheye lens was released in 1962 and by 1964 it was being used to document the British invasion led by the Beatles. By 1969, it was used to capture all the trippy moments of the Woodstock music festival. The fisheye lens’s warped perspective gave fans and artists the ability to get incredibly close to the camera, and no genre took advantage of that more than hip-hop in the 1980s and 1990s. Watch the Hype Williams-directed Busta Rhymes music video for “Dangerous,” and you’ll know what I mean.

The story of how the fisheye lens was developed from the beginning might be just as interesting as all the ways it’s been used since.

Cup of Politics: Listen to USA TODAY's weekly political podcast
The October Democratic presidential debate, explained in under 25 minutes
Trump’s presidential campaign is Too Online
Trump was supposed to change the GOP. But the GOP changed him.
Trump donated $100,000 of his salary to fight coronavirus. He’s made much more than that off the pre...
Want to be in our new YouTube show? Send us a question.