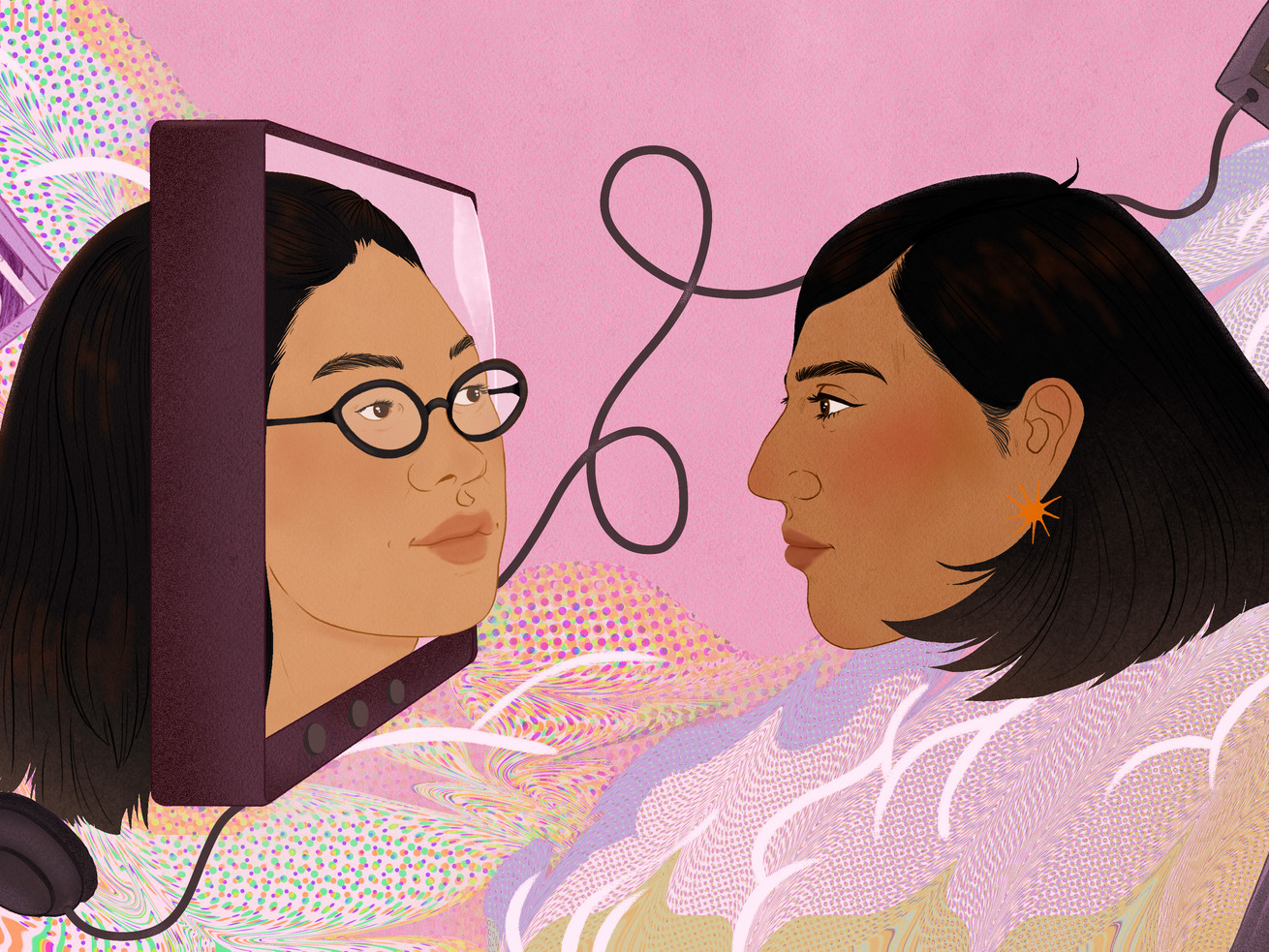 I have so little in common with the rock-loving Korean American teenager. Yet I found something relatable in her contained form of rebellion.

This article is part of the Asian American identity series.

There’s an iconic moment early in the first season of Gilmore Girls, when Rory Gilmore swings by her best friend Lane Kim’s house to borrow a CD. Lane, a spunky Korean American teen played by Keiko Agena, obliges by lifting up loose floorboards in her room to reveal a massive collection of the secular rock-and-roll albums her religious mother won’t allow her to consume.

I was not, myself, actually allowed to consume Gilmore Girls either, which has a mildly scandalous premise: It follows Rory and her 30-something single mom, Lorelai, who got pregnant as a teenager. Parenthood out of wedlock was not condoned in my Indian immigrant household — or in Lane’s. (As Lane tells Lorelai, Mrs. Kim “doesn’t trust unmarried women.”) Nevertheless, I watched Gilmore Girls surreptitiously, and instinctually loved Lane’s rebellious hijinks. She contrives elaborate codes and alibis to finagle a single phone call with a boy. She plans a KGB-worthy covert drop to have Rory deliver the new Belle and Sebastian single when she gets grounded for dating. She tries to “come out” to her mother as a rebel a few times — once memorably dyeing her hair purple and then re-dyeing it black in terror; another time calling Mrs. Kim while drunk and declaring her intoxication.

When I was in graduate school, a white guy once read my fiction and noted that my characters — second-generation South Asian teens growing up in a socially conservative immigrant bubble — engaged in “contained debauchery,” as though they should have been a little harder-core. Lane’s debauchery might have seemed contained to an outsider, but I know it was plenty serious for her.

In Lane’s scheming, I recognize an exaggerated version of the code-switching that some children of immigrants cultivate as a survival strategy, and in Mrs. Kim’s unbending responses, I see a familiar portrait of a mother intent on protecting her child from the unholy American trifecta of drinking, drugs, and dating. Like Lane, I loved art, often art the adults in my community disapproved of; like Lane, I sequestered my tastes beneath the proverbial floorboards. Like Mrs. Kim, who eventually (and heartbreakingly) discovers Lane’s secret stash and unravels years of lies — and, hurt and afraid, fears she has lost her daughter — my parents got wise to my various misbehaviors and shoddy cover-ups. And finally, like the Kims, who find a tenuous peace as Lane enters her 20s, my family and I started to learn how our occasionally diverging values can coexist now that I’m an adult.

And yet I had none of this language when I was watching Gilmore Girls when it first aired in the early 2000s. As a teenager, I wasn’t seeing myself in Lane. I didn’t even think of myself as “Asian American” except when I had to check a box on a standardized form. It wasn’t until I reentered the Gilmore Girls’ utopian setting of Stars Hollow, Connecticut, during my post-vaccine haze this spring that I realized how complex my feelings about Lane are, and how much they mimic the complexities I feel about laying claim to the term “Asian American” at all.

Growing up, I was only Indian — not even “South Asian” (a term I learned in college). And there were probably more material differences than similarities between Lane and me. My parents are Hindu, not Christian like the Kims — Mrs. Kim’s rigid Seventh-Day Adventism (based on Korean American Gilmore Girls producer Helen Pai’s real life) would have been deeply bizarre in my household. My Ivy League-striving, upper-middle-class Indian American bubble resembled Rory’s white, posh prep school more than Mrs. Kim’s antique store. I went to Yale and became a journalist like Rory. Lane doesn’t finish college; the one her mother briefly sends her to is a Christian school that bans nail polish and spicy condiments.

Religion and class aside, we simply didn’t look alike; we couldn’t pass for each other, and wouldn’t get mixed up by the carpool moms who often swapped out my name for the other Indian girls’. (Notably, Agena and Emily Kuroda, who plays Mrs. Kim, are Japanese American, not Korean, which suggests the show did conflate East Asians — a practice that was all too common 20 years ago and persists today.) Our parents’ languages and family foods were distinct. That both of our roots could be traced to the Eastern half of Eurasia seemed irrelevant, given the size of that landmass. My priority in those years wasn’t identifying opportunities for solidarity with other othered people. It was hard enough to articulate who I was just to myself.

My adolescent ambivalence about the unwieldy term “Asian American,” which includes Bangladeshis, Bhutanese, Thais, Taiwanese, and everyone in between, is not unique. Many Asian Americans feel unmoved or even angered by the phrase “Asian American,” which fails to sum up so many varied cultures. And though my subject matter here is a feel-good dramedy, the inadequacy of the epithet has high stakes and a real history beyond Stars Hollow. The “model minority” narrative of all Asians being like rich, high-achieving Indians, for instance, can shape policy that disenfranchises poorer Asians like Hmong students.

And recently, some South Asians felt that those calling to “Stop AAPI Hate” in the wake of attacks on East Asians didn’t tap into the same rage when four Sikh workers were murdered at an Indianapolis FedEx. South Asians have a particularly baffling racial history of being classified, at various intervals, as Black, Caucasian, Asian, and none of the above.

Personally, I experience a kind of vertigo about “Asian America.” I’ve boned up on the AAPI history, contributed to the AAPI reading lists, penned the AAPI think pieces, and written an AAPI novel, and yet sometimes, all the talk about the label makes me feel like I’m just spinning on the spot, getting nowhere new, only making myself sick.

When, while feverish from Pfizer dose two, I switched on Gilmore Girls, I did not plan on thinking about the ways “Asian America” functions for me. I was already sick. I had absconded into Stars Hollow for the comfort it provides, not to analyze it. But the landscape of the show looked different 15 years after I first saw it. I grasped, suddenly, that I don’t share anything inherent with Lane. Some might see in both of our stories something essentially “Asian” — the apocryphal “tiger parents,” a desire to assimilate. But these aren’t, of course, racial qualities. They’re social. What I share with Lane isn’t Eastern roots — it’s the self-consciousness with which we must react, respond, and relate to America, as outsiders to this country.

The Kims and the Sathians defined parts of ourselves in rejoinder to mainstream white America, which makes for a comic pendulum: Adults ban rock music or TV shows that acknowledge premarital sex; kids seek out the contraband. This feels like a synecdoche of the way Asian American identity has been formed — reactively. Though the term “Asian American” was originated by 1960s radical left-wing students building a “coalition” of identities (as the poet Cathy Park Hong has put it) to resist imperialism and capitalism, Asians were lumped together before we united together. Racist American policies have intermittently banned migration from Asia for a century and a half and continue to cast Asians as perpetual foreigners or traitors (see: Manzanar; Guantanamo Bay; the past year of Covid-related attacks).

It can sometimes feel like we’ve been legislated or sociologized into an identity rather than adopting it ourselves, which might be why Lane — and I — got so serious about artistic self-invention. But after all that, we’re often still marginal. This dynamic even played out within Gilmore Girls itself — Lane was always the B-plot to the white people’s A-plots, and fan consensus is that her arc tanked as the show progressed into Rory’s WASPy Yale world.

Often, the contemporary discourse of representation suggests that the point of putting minorities on screen is to provoke something like a second mirror stage. In seeing someone who “looks like us” on television or in film, our identities are theoretically validated. But so much of what’s interesting about relating to other people happens in the space between what we recognize and what we do not. And perhaps this is one way of thinking about Asian Americanness — that the work and joy of it occur in that weave and bob, in the movement between being crowded together and choosing to crowd together. But then again, maybe I just need to justify the hours I spent back in Stars Hollow.

Sanjena Sathian is the author of the novel Gold Diggers. Her fiction has also been published in Conjunctions, Boulevard, Salt Hill Journal, The Master’s Review, and Joyland, and she’s written nonfiction for the New York Times, the New Yorker, Time, Food & Wine, the Los Angeles Times, and more.

Silly songs, dances, and skits: The world is using humor to curb coronavirus’s spread
Vaping: the astonishing surge in e-cigarette use
Iran just fired missiles at US military targets. What does this mean?
California Gov. Jerry Brown casually unveils history’s most ambitious climate target
One Good Thing: Spiritfarer is an adorable video game about life and death
Trump spokeswoman Sarah Huckabee Sanders kicked out of Virginia restaurant by owner