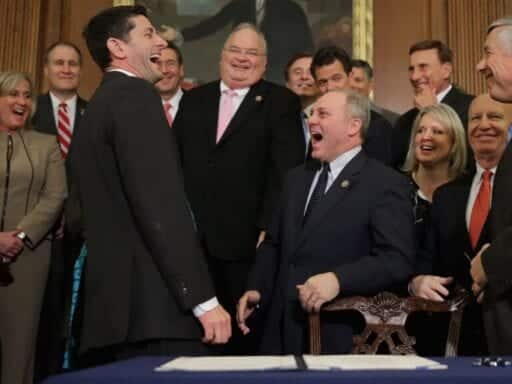 Sometimes, people who stare into the abyss blink.

When Texas v. United States, a lawsuit over Obamacare, was argued last summer, the United States Court of Appeals for the Fifth Circuit appeared determined to repeal the entire law root and branch.

Instead, in their opinion Wednesday, they punted on the biggest question: whether the entire law should be repealed.

Judge Jennifer Elrod’s opinion holds that what remains of the individual mandate, a provision of the Affordable Care Act that currently does nothing because Congress repealed the only consequence for violating this mandate, is unconstitutional.

Yet while a trial judge held that the whole law must be repealed, the appeals court dodges this question, saying that Reed O’Connor, the staunchly conservative trial judge who struck down the entire law, must redo his analysis.

Briefly, the plaintiffs argued the individual mandate — or, at least, the shell that remains of it — is unconstitutional. They then argued that the courts should repeal the entire Affordable Care Act because of this alleged defect in one provision of the law.

The plaintiffs’ legal reasoning in Texas isn’t simply rejected by liberal and centrist legal experts — it’s even rejected by many lawyers who spent a good part of their career trying to convince federal courts to repeal Obamacare.

Jonathan Adler, a conservative law professor and one of the leading evangelists for an earlier lawsuit seeking to undercut the Affordable Care Act, labeled many of these latest arguments against Obamacare “implausible,” “hard to justify,” and “surprisingly weak.”

Ilya Shapiro of the Cato Institute, another conservative lawyer who fought hard to destroy Obamacare in previous cases, wrote that he was “quite skeptical” that even a very conservative appeals court would embrace the plaintiffs’ legal arguments in Texas.

The Wall Street Journal’s editorial board labeled this lawsuit the “Texas ObamaCare Blunder.”

Yuval Levin, a leading conservative intellectual, wrote at the National Review that the Texas lawsuit “doesn’t even merit being called silly. It’s ridiculous.”

And yet the litigation survives another day — at least until O’Connor, a former Republican Senate staffer known for handing down rulings that implement the GOP’s policy preferences, takes another crack at the case.

To understand Judge Elrod’s majority opinion in Texas, we need to turn back the clock to the original legislation President Obama signed in 2010. Then we need to advance that clock a little further to 2017.

As originally enacted, the Affordable Care Act requires most Americans to pay higher income taxes if they do not have health insurance. This is Obamacare’s “individual mandate,” which the Supreme Court famously upheld as a valid exercise of Congress’s power to levy taxes.

After Republicans took control of Congress and the White House in 2017, they spent the better part of the year debating various proposals to repeal Obamacare, but they ultimately did not have the votes to pass a broad repeal. They did, however, add a provision to the 2017 tax legislation that effectively repealed the individual mandate. Though the United States Code still contains the same language requiring individuals to pay a tax penalty if they do not have insurance, the amount of that penalty is now zero dollars.

The Texas plaintiffs’ attack on Obamacare hinges on this 2017 amendment zeroing out the individual mandate. The Supreme Court upheld the fully functional mandate because it is a tax — but a zero dollar tax is no tax at all. Therefore, the plaintiffs claim, the zeroed out mandate is unconstitutional.

This is the strongest part of the plaintiffs argument — though it is far from airtight. But even if the plaintiffs are correct that the non-functional mandate is unconstitutional, so what? A federal court order striking down a mandate that does nothing is hardly a historic legal victory.

To really prevail — that is, to strike down the parts of Obamacare that actually matter — the plaintiffs needed to convince the court to embrace two other legal arguments that are far less plausible than the case against the non-mandate mandate itself.

Why no federal court should be allowed to hear this case

The Constitution does not permit just anyone to show up in federal court and ask the court to strike down a law. Rather, in order to bring a lawsuit challenging a legal provision, a plaintiff must show that they were injured in some way by that law — a requirement known as “standing.”

The Texas plaintiffs challenge a law that literally does nothing. It requires people who do not have health insurance to pay zero dollars. So no one has standing to challenge the zeroed-out mandate.

The plaintiffs claim they get around this problem by pointing to the way the statutory language laying out the individual mandate is structured. Briefly, it’s divided into several subsections. The first says that most individuals “shall” carry health insurance, the second says that people who fail to buy insurance will pay a tax penalty, and the third sets the amount of that penalty — which, again, is now zero dollars.

Though the penalty for not having insurance is absolutely nothing, the plaintiffs claim that they are still bound by the language saying that they “shall” carry insurance — and therefore are injured by a law that commands them to do something they don’t want to do. And the Fifth Circuit agreed with this argument, claiming that “the costs of compliance can constitute an injury just as much as the injuries from failing to comply.”

The biggest problem with this argument, however, is that it flies in the face of the Supreme Court’s decision in NFIB v. Sebelius, the decision upholding the fully functional individual mandate. As Chief Justice John Roberts explained in that case:

Neither the Act nor any other law attaches negative legal consequences to not buying health insurance, beyond requiring a payment to the IRS. The Government agrees with that reading, confirming that if someone chooses to pay rather than obtain health insurance, they have fully complied with the law.

The Supreme Court, in other words, explicitly rejected the Texas plaintiffs’ argument that they are bound by a command to buy insurance. There are no “negative legal consequences to not buying health insurance,” and a person who pays the tax penalty — which, one more time, is zero dollars — fully complies with the law.

Alternatively, Judge Elrod claims that the states challenging the law have standing because they are “required by the ACA to issue forms verifying which employees are covered by minimum essential coverage and therefore do not need to pay the shared responsibility payment.”

Having waved over the standing problem, the Fifth Circuit then concludes that the nothingburger mandate is unconstitutional. The ex-mandate, according to Elrod, “no longer yields the ‘essential feature of any tax’ because it does not produce ‘at least some revenue for the Government.’” And if it’s not a tax, that means it can’t be upheld under Congress’ power to tax.

Again, this is the most plausible segment of the court’s reasoning, though it is hardly a slam dunk. As a legal team representing the House of Representatives explained in a brief defending Obamacare, “Congress unquestionably possesses authority to express its views” in a “non-binding manner,” and a law that does nothing can fairly be construed as just such a statement of viewpoint.

In any event, a decision striking down a zero dollar tax doesn’t mean much — except that the Fifth Circuit’s opinion then takes a very weird turn.

When a court strikes down part of a broader statute, it often needs to ask whether other parts of the law should fall along the provision that was struck down. This inquiry is known as “severability,” and it is normally a speculative inquiry. Courts must ask what hypothetical law Congress would have enacted if it had known that one provision was invalid.

The Supreme Court, moreover, requires courts to apply an extraordinarily strong presumption against striking additional provisions of a law. As Justice Samuel Alito explained in the Court’s opinion in Murphy v. National Collegiate Athletic Association, “in order for other . . . provisions to fall, it must be ‘evident that [Congress] would not have enacted those provisions which are within its power, independently of [those] which [are] not.’”

The correct analysis, in other words, would be for the Fifth Circuit to uphold every provision of the Affordable Care Act that actually does anything at all. Instead, it punts the severability question back down to Judge O’Connor.

O’Connor’s opinion, Elrod explains, “gives relatively little attention to the intent of the 2017 Congress, which appears in the analysis only as an afterthought despite the fact that the 2017 Congress had the benefit of hindsight over the 2010 Congress.” O’Connor, moreover, did “not do the necessary legwork of parsing through the over 900 pages of the post-2017 ACA, explaining how particular segments are inextricably linked to the individual mandate.”

While parts of O’Connor’s opinion “lists a few examples of major provisions and cogently explains their link to the individual mandate, at least as it existed in 2010.” The trial judge “must undertake a similar inquiry for each segment of the post-2017 law.”

So what comes next?

It’s likely that the case will proceed on two tracks. While the Trump administration took the plaintiffs’ side in this case, several states intervened to defend Obamacare. Those states are likely to ask the Supreme Court to kill this case once and for all.

Meanwhile, O’Connor will take another crack at the severability analysis. Given O’Connor’s record, he’s likely to strike down as much of the law as possible. But the Fifth Circuit also gave him a daunting task. O’Connor must parse “through the over 900 pages of the post-2017 ACA, explaining how particular segments are inextricably linked to the individual mandate.” His law clerks are going to be busy.

Nor will O’Connor have the last word on this case. His new decision will appeal once again to the Fifth Circuit. And, if the Fifth Circuit decides that any part of the functional parts of Obamacare must be struck down, the Supreme Court will likely take up the case (if it hasn’t already).

The lawyers seeking to defend Obamacare, in other words, have miles to go before they sleep. And the fate of millions of Americans hangs in the balance.

Trump’s closing impeachment argument involved misrepresenting a tweet from the whistleblower’s lawye...
Facebook’s sad summer continues with a $650 million settlement
Brett Kavanaugh’s yearbook: the “boof” joke, explained
Michael Brown was shot by Ferguson police. Now his mom may soon oversee them.
Congress has finally reached a deal on coronavirus stimulus
A British couple was poisoned with a lethal toxin. The UK is blaming Russia.