The right-wing populist wave is a threat to the climate 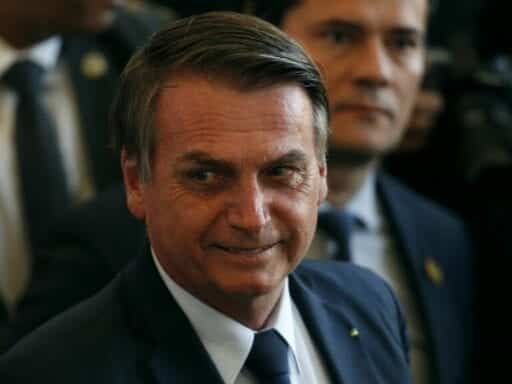 The Amazon rainforest fires reveal a lot about this political movement.

The Amazon rainforest is on fire — and the consensus is that Brazil’s far-right populist leader, Jair Bolsonaro, is to blame.

Bolsonaro, who took office in January and has been referred to as “Captain Chainsaw,” gutted funding for agencies protecting the massive rainforest, essentially giving wink-and-nudge approval for illegal loggers to do their thing. Fire is used as a tool for clearing Amazon land for ranching, and the more trees are cut down, the more vulnerable the rainforest is to wildfires. There have been almost twice as many fires detected in 2019 so far as there were in the entirety of 2018.

It’s hard to overstate how threatening this policy is to the climate. The Amazon is the world’s largest rainforest: its trees scrub the Earth of a significant amount of CO2 and have captured a huge amount of carbon and methane within their branches and roots. If you lose the trees, a lot of greenhouse gases get released and it becomes harder to capture emissions from other sources. Continued fires and clear-cutting in the Amazon could cripple the fight against climate change.

All of this goes to underscore an important and poorly understood point: The wave of right-wing populism sweeping the world is not only dangerous for the countries who succumb to it, or even to immigrants wishing to move to those nations. It’s a fundamental threat to progress against climate change — and thus the entirety of the human race.

Right-wing populism versus the climate

Bolsonaro has been dubbed the “Trump of the Tropics,” a far-right firebrand who shares the American president’s hostility to democracy and penchant for saying extremely offensive things about women and minorities. The similarities clearly extend to climate policy — Trump famously labeled climate change a Chinese hoax, pulled out of the Paris agreement on climate change, and recently presented a “carbon regulation” plan that could actually increase emissions.

The American and Brazilian leaders are particularly aggressive on the issue, but they’re hardly alone among Western right-wingers. A February report from the German Adelphi Institute, an environmental think tank, found that 18 out of the 21 largest European far-right parties are either generally indifferent to climate action or outright oppose it.

Nigel Farage, the leader of Britain’s Brexit party, recently called climate change a “scam” during an interview with conspiracy theorist Alex Jones. Germany’s Alternatives for Deutschland (AfD) claims in its most recent electoral platform that “CO2 is not a pollutant, but an indispensable component of all life.”

By contrast, the centrist and left parties in these countries were, prior to the populist wave of the past few years, doing a markedly better job on addressing climate change — not perfect or sufficient, mind you, but comparatively much better than what the far-right parties want.

Between 2003-2011, a left-wing Brazilian government managed to cut Amazon deforestation rates by 80 percent. Obama massively boosted the American renewables industry via the 2009 stimulus, helped negotiate the Paris Climate Accord, and implemented the Clean Power Plan to cut emissions from US power plants. In 2005, the EU put in place the world’s first major emissions permit and trading system (the European Union Emissions Trading System, or EU ETS).

So there’s a clear contrast between the right-wing populists on the one hand and their leading opponents on the other.

Right-wing populism today centers on a particular kind of chauvinistic nationalism — an “America First” style obsession with the importance of their (typically ethnically defined) home nation and its independence from international institutions. European populists hate the European Union, with its open-borders approach to immigration and transnational economic regulations; both Trump and Bolsonaro have insulted international institutions and withdrawn from global agreements.

This brand of populism poses a particular challenge for the effort against climate change. It’s a global issue that no one country can solve on its own; it requires collective action, negotiated through some forum like the Paris Climate Agreement. It’s a paradigmatic example of the limits of nationalism and the need for organizations like the UN and EU. You can’t propose an effective solution to a transnational problem through a narrowly nationalist framework, and yet the nationalists are here attacking both climate policies in their own country and the very idea of global governance itself.

This is a crucial time; a recent UN report claims we have 11 years to prevent “irreversible damage” from climate change. Large population centers like the United States, Brazil, and the EU as a bloc are responsible for a major chunk of emissions.

It’s especially important that wealthy countries take the lead on the issue. Poorer countries are less likely to act when they think they’re unfairly bearing the burden of a problem kickstarted by Western industrial development. Backsliding in the US and Europe hurts climate action everywhere.

Right-wing populists are often framed as a threat to Western democracy — and they certainly are that. But the stakes are even bigger than they appear at first glance: It’s not just the survival of Western democracy that’s at stake, but the planet itself.

Trump’s Covid-19 diagnosis is an indictment of his approach to the coronavirus
Amazon lost a $10 billion Pentagon contract to Microsoft. Now it’s blaming President Trump directly.
One of Donald Trump’s biggest Silicon Valley backers is renouncing his support
Trump’s Justice Department is threatening cities that allow safe injection sites
6 winners and 5 losers from a Succession where the unthinkable happens
What the US can learn from other countries using phones to track Covid-19