The rise in meth and cocaine overdoses, explained 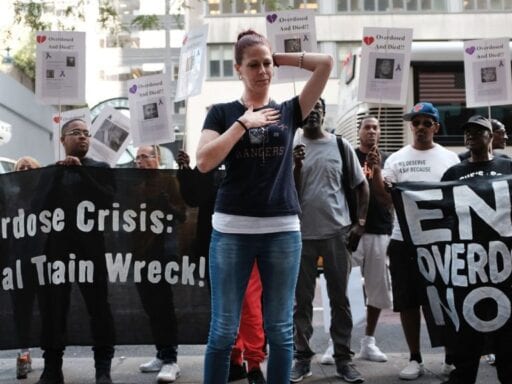 America’s drug overdose crisis could be reaching a new phase.

Experts worry that the numbers for stimulants could foreshadow a larger epidemic — a potential “fourth wave” in the overdose crisis that’s killed more than 700,000 people in the US since 1999.

“Every opioid epidemic in American history has been followed by a stimulant epidemic,” Stanford drug policy expert Keith Humphreys told me.

The numbers for meth and cocaine are still dwarfed by opioids. In 2018, there were more than 13,000 estimated overdose deaths linked to stimulants, particularly meth, and more than 15,700 linked to cocaine, according to the provisional data. Meanwhile, there were nearly 48,000 overdose deaths linked to opioids. Synthetic opioids excluding methadone — a category that mainly captures fentanyl — were associated with more than double the fatal overdoses linked to cocaine or meth alone. (There’s some overlap between drugs in the figures, because overdoses can involve multiple drugs.)

But there are reasons to believe the crisis is broader than just opioids. A 2018 study in Science found that, while drug overdose deaths spiked in the 1990s and 2000s with the opioid epidemic, there has been “exponential growth” in overdose deaths since 1979. That suggests that America’s drug problem is getting worse in general, regardless of which drug is involved.

“My question: Why are we as a country vulnerable to all of these drugs?” Nora Volkow, director of the National Institute on Drug Abuse, told me. “What has happened that has made it possible for these drugs to take hold in a dramatic way?”

The answers to those questions could require a shift in how America approaches drugs, focusing not just on the substances making headlines but also addiction more broadly and the causes of addiction. It would mean building a comprehensive addiction treatment system that’s equipped to deal with all kinds of drugs. And it could require looking at issues that aren’t seemingly drug-related at first, like whether socioeconomic and cultural forces are driving people to use more drugs.

In the 1960s and ’70s, heroin was the big drug of public concern. In the 1980s, it was crack cocaine. In the 1990s and early 2000s, it was meth. Over the past decade and a half, opioid painkillers, heroin, and then fentanyl became the center of America’s drug problem.

It’s not clear if the next phase is here yet — opioids are still a huge problem — but the worry is stimulants will start to pick up if opioids plateau and fall.

“The drugs are driven by fads, a little bit of fashion,” Volkow said. “So you have eras when you have a flourishing of a particular drug and then another one takes over.”

According to experts, there are many reasons for that. One is supply. Starting with the launch of OxyContin in 1996, there was a huge proliferation of opioid painkillers, letting people try and misuse the drugs. That was followed by waves of heroin and fentanyl as traffickers tried to capitalize on the demand for opioids jump-started by painkillers. Some research shows the supply of prescription opioids was a key driver in the rise of the current overdose crisis.

There are now reports of drug cartels producing and shipping more meth than before across the US-Mexico border — a shift from the homegrown market of the 1990s and 2000s. And in general, illicit drugs have become cheaper and, in some cases, more potent over time. Federal data tracking the street price and potency of the drugs tells the story: In 1986, for example, meth was on average $575 per pure gram and on average at 52 percent purity; in 2012, it was $194 per pure gram and 91 percent purity. The price drop is similar for other drugs, though purity levels have fluctuated depending on the substance.

This makes it cheaper for someone to start using drugs. The central focus of the US war on drugs for decades has been to prevent this — by fighting drug traffickers and dealers — but it’s failed as drug cartels have consistently remained ahead of the authorities, bolstered by new technologies and globalization making it cheaper and easier to ship drugs around the world.

New demand for drugs is also a major factor for new epidemics — as people could, for example, want to supplant or enhance their opioid use with stimulants. Maybe they mix opioids with cocaine (a “speedball”) or meth (a “goofball”) because they like the mixed effects. Maybe they use stimulants after heroin or fentanyl to wake themselves up. Maybe they want to stop using opioids, whether due to the risk of overdose or some other reason, and believe stimulants are a better option.

“People get tired of it — have been there, done that, and move on,” Steven Shoptaw, a psychologist and researcher at UCLA, told me. “There is some of that with all addictions. Some people walk away from [opioid addiction], which is great. But then they walk away from it by using stimulants.”

Humphreys noted an important factor in this cycle: “Probably more Americans than ever know a drug dealer.” As millions of Americans have misused and gotten addicted to opioids, they’ve established ties with drug dealers that they didn’t have before. That makes it easier to go from heroin or fentanyl to meth or cocaine.

Underlying all of this, Volkow argued, is a sense that something deeper has gone wrong in society. She pointed to the research by Princeton economists Anne Case and Angus Deaton showing that there’s been a rise in “deaths of despair” — drug overdoses, but also alcohol-related mortality and suicides. Case and Deaton have pinned the rise on all sorts of issues, including the collapse of economic opportunities in much of the country, a growing sense of social isolation, and untreated mental health issues.

“If all of these social factors were there, and we didn’t have the supply of drugs, of course people would not be dying of overdoses,” Volkow said. “But it is the confluence of the widespread markets of drugs — that are very accessible and very potent — and the social-cultural factors that are making people despair and seek out these drugs as a way of escaping.”

One caveat to all of this: Not every place in the US is following the same drug trends. According to the Science study and the provisional federal data, meth has historically been more popular in the southwest, while fentanyl has been more widespread in the northeast. Researchers have warned that could change if, for example, fentanyl reaches California in a big way. But it goes to show that what looks like a national epidemic or trendline could also be regional epidemics, with different populations and demographics, separately rising and falling.

There are things that can be done to combat drug epidemics in general.

One option is to attempt to reduce supply, as the drug war has generally focused on for decades. Plenty of critics are extremely skeptical of this, pointing to the fact that illegal substances have only gotten cheaper and continued flowing into the US since President Richard Nixon declared a war on drugs.

But some work by Jon Caulkins, a drug policy expert at Carnegie Mellon University, indicates that prohibition makes drugs as much as 10 times more expensive than they would be otherwise — making the drugs less accessible and less ripe for an epidemic. There’s a logic in that: If drug dealers and traffickers have to grow, ship, and sell drugs while actively evading law enforcement, and therefore can’t built up the kind of mass production seen in legal markets, that adds costs.

Another potential policy response is to address what some experts call the root causes of drug addiction — by rebuilding economic opportunities, helping people feel more connected, or addressing mental health issues. There’s some real-world evidence this could work: Iceland set up an anti-drug plan focused largely on providing kids and adolescents with after-school activities, which journalist Emma Young described as “a social movement around natural highs,” and saw drug use fall among younger populations in the subsequent years.

There are other possible prevention efforts, such as doctors more routinely screening for drug addictions or public awareness and education campaigns (although, as the surgeon general’s 2016 addiction report cautioned, some types of campaigns work better than others).

“The most impactful intervention that you can do for a medical condition is prevent it,” Volkow argued.

Broadly, the US also needs to invest much more on addiction treatment. According to the surgeon general’s report, only about one in 10 people with a substance use disorder obtain specialty care, largely because it’s inaccessible and unaffordable. More money to addiction care could help boost access, although that would have to be paired with an emphasis on more evidence-based practices.

At the same time, a one-size-fits-all approach for all drugs is going to fall short.

For one, drugs are simply different from each other. For opioids, the biggest health risk is a fatal overdose. For stimulants like cocaine and meth, overdose is still a major concern, but the bigger health risk is the long-term damage the drugs do to the brain and cardiovascular system.

From a harm-reduction standpoint, this means that simply averting overdoses can do a lot to prevent the worst health risk of opioids, even if someone continues using for years. But for stimulants, deadly harms can’t be fully reduced until levels of consumption are reduced as well. So, for example, safe consumption sites, in which trained staff supervise drug use, might have more protective benefits for opioids than stimulants. (Still, the sites can provide a lot of other services for people who use stimulants, like sterile syringes, advice on how to use as safely as possible, and a connection to addiction treatment.)

Along similar lines, treatment is, for now, more effective for opioids than it is for stimulants. For opioids, we have effective medications in buprenorphine, methadone, and naltrexone, which, according to studies, cut the mortality rate among opioid addiction patients by half or more and keep people in treatment better than non-medication approaches. In France, the expansion of buprenorphine was a major factor in a 79 percent drop in overdoses from 1995 to 1999.

There aren’t equivalent medications for stimulant addiction. In fact, the only treatment that really stands out for stimulants, according to a recent review of the research in The Lancet, is contingency management, which provides incentives, financial or otherwise, to keep people from using drugs. But this treatment is controversial — not many people want to pay people who use drugs to stop using drugs. So it’s hugely underused in addiction treatment, outside of the Veterans Affairs health care system.

So simply building up America’s addiction treatment system isn’t enough to address all of the country’s drug problems. What kinds of treatment are done and how different drugs are treated also matter. And in the case of stimulants, treatment is probably going to produce disappointing results unless treatment facilities adopt an approach many are averse to and until researchers uncover better approaches.

This is why experts and advocates have long warned about focusing too much on the drug crisis of the day. While the opioid epidemic is a problem that needs to be addressed now, it’s important to be realistic about what could come next — and taking steps to prevent not just the current kind of drug crisis but also what could follow.

The recent rise in stimulant deaths, though, suggests that America remains unprepared.

Trump’s Friday night effort to weaponize coronavirus against his enemies has already aged poorly
Boris Johnson had a really bad day in Luxembourg. The Incredible Hulk was involved.
Why all Americans should celebrate Juneteenth
Trump’s rambling attacks on Mueller and Democrats at the Putin presser, annotated
Bernie Sanders’s failure to win over black voters on Tuesday could doom his campaign
For 24 hours, watch amazing actors perform on Instagram