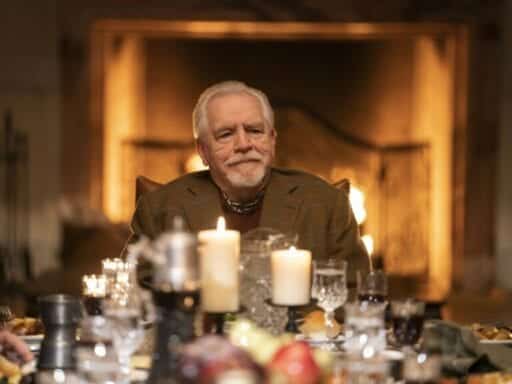 The HBO series about awful rich people seems like it’s about wealth. It’s really about abuse.

Kendall’s efforts to oust his dad from the CEO chair unraveled multiple times. He started using again, feeding a drug addiction that became a tabloid scandal when he last was consumed by it. His former marriage is now completely broken, and his kids seem to barely know him. And just when he thought he might be able to stand up to his domineering father, tragic circumstance conspired to draw him ever closer to the family he longed to shed like an ill-fitting skin.

And that was just in season one. The moment that crystallizes how far Kendall has fallen comes halfway through season two. After a night of genuine connection with a fellow addict, he wakes up to find the sheets of his bed caked in his own shit. As a visual metaphor, it’s perhaps a bit too cheeky — Kendall shits the bed again! But the way he simply sighs and gets on with his life is telling.

And then later, downstairs on his way to breakfast, a maid passes in the hall behind him, carrying a basket full of laundry. He exchanges a look with her. She knows. She knows what happened, but she can’t say anything. They’re linked by an incredibly precarious understanding of his frailty and deep-seated shame.

The maid appears in just this one shot. She is not a character on Succession. The show doesn’t give her a name. The real action of the episode will continue at breakfast, where Kendall will hear more about a possible business deal. But the maid appears, for just that blink-and-you’ll-miss-it moment, because she, too, is important to what Succession is trying to say.

Kendall and his fellow members of the ruling class have power and money. They have self-determination. But they can’t escape themselves. And the tragedy on Succession — what makes it perhaps the best TV drama of the year — is how acutely it understands that nobody else can escape them either.

Like most HBO shows, Succession applies a vague filter of respectability to a supposedly disreputable genre

HBO built its reputation by gussying up genres that are often derided as facile or empty, applying just enough prestige to make them worthy of discussion at dinner parties. Whether it’s The Sopranos updating the mob drama with psychology or Game of Thrones turning the fantasy genre into a chance to talk politics, HBO is really good at blending perceived junk food with perceived “quality.” It’s not like the genres the network has “updated” were in any need of being saved. But HBO’s marketing sure wants you to feel like watching its shows makes you a classy human being.

Succession arguably has the most work cut out for it in this regard. At its heart is an old-fashioned family soap opera, in the style of Dallas or Dynasty. Like those shows, Succession is about the unchecked mega-rich, the offshoots of capitalism run amok. Like those shows, it is a lot of fun to watch, frequently as funny and audacious as anything TV has cooked up.

But unlike those shows, Succession’s plot twists rarely involve sexy complications. It has yet to reveal a whole season as having all been a dream. Instead, the show finds its pleasure in endless business machinations, in the ways that members of the Roy family compete with each other for dominance and the ways their competition has scarred them irreparably. (In real-world terms, the family is a rough mashup of the Fox News-owning Murdochs and the Paramount-owning Redstones.)

I think it’s possible with all TV shows to boil them down to a single that encapsulates their fundamental ideas about the world. (This idea did not originate with me; I first heard it from the writer Alex Epstein.) In my mind, The Sopranos is about family. Game of Thrones is about power. You might have a different one-word label for either show, but the point is: The best TV shows usually have one central theme they keep ruminating on over and over, putting different spins on it the longer they run.

What makes Succession so tricky to describe is that it seems like it’s about “wealth,” but it’s really about “trauma.” But in the series’ estimation, those two themes are linked. The show is particularly interested in how unchecked capitalism is frequently a perversion of some barely understood childhood sorrow that repeats itself across generations. Humans often use money to try to fill some void inside of us. Well, what happens when your childhood was horrible and you have all the money in the world? What happens when the void can never be filled?

That’s the question Succession circles and flirts with and ultimately digs into. Season one took its time setting up the characters, particularly the central Roy quartet of Logan (Brian Cox) and his three youngest children: Kendall (Jeremy Strong), Roman (Kieran Culkin), and Shiv (Sarah Snook). Logan’s oldest son, Connor (who has a different mother from his three half-siblings and is played by Alan Ruck), also figures prominently in the series, though he’s so far been treated more comedically than they have. Add to this core group the Rosencrantz and Guildenstern-ish duo of Tom (Shiv’s fiancé, played by Matthew Macfadyen) and Greg (a cousin who burrows down into the family, played by Nicholas Braun), and you have the foundation of what makes Succession work.

Key to what makes the series so successful is the way it blindsides you. In its first season, Succession establishes Logan as a tyrant but also a faltering one. In the very first episode, he suffers a debilitating stroke that sends him to the hospital and leaves his children scrambling to fill the resultant power vacuum. Right from the start, the show seduces you into the kind of wildly funny tales of awful rich people that have always been popular. The Roy siblings snipe and swipe at each other, lusting for power and money and never quite grasping it. The second any one of them obtains some, they’re reminded of how easily their father can strip it away, even in a weakened state.

And it’s that quality that causes many of my friends who can’t stand this show to tap out. Succession doesn’t feel like a celebration of wealth to them, not exactly, but it also doesn’t feel like a repudiation of it. To really like this show, you have to be entertained by the antics of Roman skulking around like a slimy cat, right? You have to enjoy Shiv’s fundamentally empty attempts to leverage her identity as The One Roy Daughter into vaguely progressive bona fides, yeah?

And I understand the aversion, I do. The world is on fire, the rich are too often to blame, and nothing is getting better. In this context, Succession can feel like the opposite of entertainment.

Succession explores a world built atop cycles of abuse

The cruelest scene in Succession’s pilot involves Roman offering to give a young working-class boy $1 million — all he has to do is hit a home run during the impromptu baseball game the Roy family is playing to celebrate Logan’s birthday. The kid, of course, doesn’t hit the home run, and after the game, a Roy family associate wanders over to pay off his family anyway, to ensure they don’t tell anybody about the Roys’ antics.

It is an exceptionally daunting scene to put in a pilot, which traditionally would give viewers some reason to invest in the characters they’ve literally just met. That reason might be how good the characters are, or how relatable they are, or how awesome they are at their jobs. But Roman? Roman just seems like a shitheel here, and even though a few of Succession’s other characters push back mildly on the way he’s arrogantly flaunting his status, they still go through with his childish show of power. The Roys are like kaiju, stomping all over the world, flattening people indiscriminately.

But that scene has become the center of Succession. Every time you think the show has normalized the Roys, has found some way to make them seem not all that bad, it pulls a rug out from under you, in ways both big and small. Sometimes, it’s the simple way its directors favor shots that hang back from the characters and present them as if they are zoo animals who would bite your arm off if you stuck it into their cage. Sometimes, it’s a shot like the one with Kendall and the maid that snaps you to attention, by reminding you of the very real humans who have to clean up the Roys’ messes.

But especially in season two, Succession’s skill at deploying this particular narrative maneuver stems from how beautifully it portrays a family mired in a cycle of toxicity and abuse. Logan Roy has always gotten his way. He’s built his life around the idea that because he thinks something is true, it must indeed be true, and he has built a media empire around similar principles of telling people what they want to hear and not what they actually need to know. He shouts and he blusters and he snaps at people, and if he doesn’t get his way, anybody close to him feels the effects of his ire.

But those who are closest to him have always been his children. Succession’s first season hinted at the depths of sadness to which Logan has driven his kids (particularly Kendall and Roman); the second season has made that sadness both the subtext and text of nearly every scene. Kendall, Roman, Shiv — all of these characters want so badly to be loved by a man who is only capable of trying to bludgeon them (occasionally literally) into a form that is more pleasing to him, which is to say a form that is more subservient to him.

Succession has so slowly and subtly revealed just how important its ideas about abusive parenting are to its storytelling that the show is still mostly being treated as a sly and funny media satire about awful rich people. To be sure, that quality is part of why it’s so heavily discussed by those of us actually in the media. (We love seeing ourselves onscreen, even tangentially!)

But the deeper season two goes, the more Logan’s monstrousness is treated as critical to the formation of his children. They long desperately to be loved. But what they get, mostly, is a sense that they have no control over anything in their lives. They spread that lack of control outward, to everyone around them. They are a ruling class that does not understand what it means to rule, much less how much that damages everyone they come into contact with, because all they have known is damage.

I think this may be why Succession has struck such a nerve, beyond its diorama-precise staging, its endlessly witty scripts, its Tilt-a-Whirl curlicue of a score (by Emmy winner Nicholas Britell). To be alive in the 2010s is to realize how deep the rot goes, how unlikely any of us is to turn the car around before it goes over the cliff.

We exist in a world full of men who believe that if they shout something loudly enough, it is true — and who take extreme offense to the idea that maybe they are wrong, no matter how gently we break it to them. We keep waking up to discover these shit-stained sheets, and someone, someday, will have to clean up the mess.