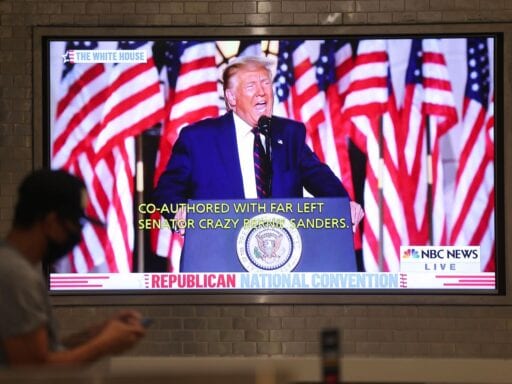 The sheer volume of lies and illegal behavior from Trump and the Republicans is what allowed them to get away with it.

The most consistent theme of Donald Trump’s Republican National Convention wasn’t that Joe Biden was a puppet for radicals. It wasn’t even that rioters and looters are coming to your home and only Trump can protect you from the radical left.

The clear theme of the RNC was a flagrant and brutal disregard for the truth.

The first night of the RNC featured more false and misleading claims than all four nights of the DNC put together, according to a CNN fact-check. The second night starred an anti-abortion activist whose tale about the horrors of Planned Parenthood had been exposed as a fraud more than 10 years ago. On the third night, Vice President Mike Pence suggested that the murder of a police officer by a far-right extremist was a crime committed by left-wing rioters. It was all capped off by President Trump’s Thursday night speech, a farrago of falsehoods that even veteran Trump fact-checkers found stunning.

“Basically everything Trump says about Biden’s proposals is false,” the Washington Post’s Philip Bump writes. In a tour-de-force segment, CNN’s Daniel Dale spent three minutes debunking the speech at a rapid clip — and still didn’t cover all the lies:

Hell of a thing to watch CNN’s @ddale8 fact-check the cascade of lies from Trump’s speech. pic.twitter.com/aRQuHf0qE5

Writing honestly about the RNC requires centering the dishonesty. But adequately describing the sheer breadth and brazenness of the lying that was on display these last four days would take volumes. And after a certain point, the whole thing reaches diminishing returns: Some depressing political science research suggests that pointing out when Trump is lying doesn’t actually change the way voters feel about him.

And that’s the dark brilliance of the RNC, and maybe the entire Trump presidency. If you just lie and break legal rules frequently enough and brazenly enough, the sheer volume of misconduct will overwhelm the systems that are designed to check them.

You may have noticed that the White House was a main character at this week’s RNC. It was the backdrop to President Trump’s address and the site where he filmed a naturalization ceremony for five immigrants without all of the new Americans’ consent.

No modern president has used the White House like this during a convention before, for the simple reason that it is illegal. The Hatch Act of 1939 puts strict limits on federal employees’ ability to participate in electioneering, including a ban on using their “official authority or influence for the purpose of interfering with or affecting the result of an election.” While the president and the vice president are exempt from the Hatch Act, the huge numbers of White House staff necessary to plan and execute a mass political rally at the White House are not.

The Hatch Act is not a dead letter: This year, federal employees have lost their jobs and been banned from public service for offenses far less severe than turning the White House into the site of a political pageant. But there’s no sign that anyone in the Trump administration will suffer any consequences for their behavior — and worse, they know it. “Some of Mr. Trump’s aides privately scoff at the Hatch Act and say they take pride in violating its regulations,” the New York Times’s Michael M. Grynbaum and Annie Karni report.

Trump gets away with this not despite the severity of the abuses but because of them. When the wrongdoing is so flagrant and so widespread, so routinized in the functioning of government, it becomes impossible to separate the misconduct from the Trump administration itself. What is the Office of the Special Counsel, the federal agency that handles Hatch Act violations, supposed to do — kick out the entire White House staff?

This same tactic also works to keep the Republican party in line. In the past, members of a president’s party might be willing to criticize isolated instances of misconduct by the president or his staff. But with Trump, the dishonesty and criminality are so baked in that the GOP can’t realistically go after it without discrediting the entirety of his presidency. So they’re faced with a choice: undermine their own hold on power or go along with the degradation.

“One notable thing about Trump’s dishonesty last night: almost all of it was in his prepared text,” writes Dale, the CNN fact-checker. “In general, the vast majority of his lying as president has been ad-libbed. In campaign season, they start putting the lies in the scripts.”

Sen. Tom Cotton, widely seen as both Trump’s pick for second-term Secretary of Defense and a leading 2024 Republican presidential hopeful, gave a speech on the fourth night defending Trump’s foreign policy record and attacking Biden’s. The speech was full of lies; Fred Kaplan, Slate’s veteran foreign policy columnist, writes that Cotton “rat-a-tat-tatted a dozen points of contrast between Trump and Joe Biden — all of them baseless.”

Immediately after the speech, Cotton received predictably negative reviews from fact-checkers. This was his response:

I see your fact checks. I am not impressed.

Of course, politicians have always lied and misled the public. But in the past, they generally would try to avoid the Trumpian volume of blatant and overt falsehood, favoring clever spin and shading over outright lies whenever possible. Fact-checking worked because, in theory, politicians could be shamed by being called out as liars.

But the Trump-Cotton Republican party doesn’t care about being shamed. They have become so disdainful of the essentials of political practice in a democratic society — a baseline attachment to the rule of law and honesty in political discourse — that they mock the very idea of accountability on these questions. They count on the sheer volume of misinformation — “flooding the zone with shit,” in Steve Bannon’s memorable phrase — to overwhelm our political institutions’ ability to check their misbehavior.

In short, they count on making us all exhausted — beating us over the head so heavily and consistently with lies that we feel abused into treating them like a normal party, debating normal things like whether their “law and order” message will resonate with median white voters in Wisconsin.

But this convention was rotten, from top to bottom. Engaging with it as a serious political event, rather than an extended exercise is dishonesty and lawbreaking, is to grant it legitimacy that it does not deserve.

Buying books isn’t enough to keep community bookstores alive
Did Jimmy Fallon just jump on the 'rage giving' train?
Woody Allen is suing Amazon for dropping him over “baseless allegations”
Joker is presumably laughing all the way to the bank after a record-breaking opening weekend
Trump’s Space Force boldly goes where Star Trek went before
The most important part of the Democrats’ impeachment resolution