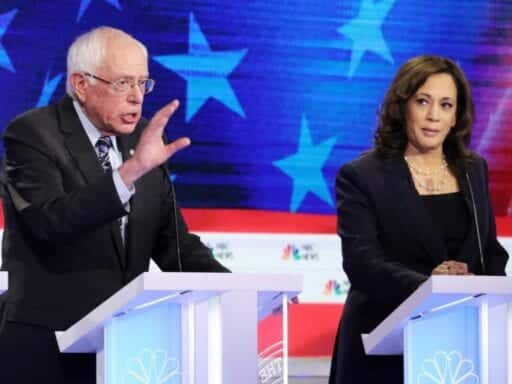 As will the important question of which candidates will debate on which night of the two-part event.

CNN and the Democratic National Committee will determine the lineups the second Democratic presidential debate this week — finalizing the roster of which candidates will qualify and how they’ll be split among the two-night event.

There’s little drama with the roster itself, which will be largely similar to the first debate last month, given that both are using the same qualification rules. But the question of which candidates are actually onstage with each other proved enormously important last time around — as Sen. Kamala Harris’s confrontation with Joe Biden turned out to be the breakout moment and boosted her campaign in the polls afterward.

So on the evening of Wednesday, July 17, CNN and the DNC will determine which 20 candidates will qualify, and which of the few others in the race will miss the cut. Then on Thursday, July 18, in the 8 pm Eastern hour, the network will air a live drawing to determine which candidates will debate on the first night and which will debate on the second.

CNN hasn’t yet given further details about how the drawing will work. The most significant unanswered question is whether the drawing will be an entirely random one from the pool of all 20 qualifiers. (NBC did not do this for the first debate — they separated out the candidates polling above 2 percent from the lower-polling ones, drew randomly from each group, and ensured the two groups would be split evenly among the debate nights.)

In any case, the debate itself will take place on Tuesday, July 30. and Wednesday, July 31, in Detroit, at 8 pm Eastern on each night.

And while it will be another crowded, lengthy affair, it’s also likely to be the last such event, since there are much tougher qualification rules in place for the third debate in September. That means, for perhaps most of the candidates onstage, it’s now or never.

Expecting an extraordinary large field of candidates, the DNC announced months ago how it would determine who qualifies for the first two Democratic debates. It set lenient standards, to help let even lower-profile, little-known candidates have a fair shot to get in the debate.

But they also had to draw the line somewhere. So the second debate, like the first, will be capped at 20 candidates. Since there are 25 at least somewhat notable Democrats in the race, that means, like last time around, the real question is who won’t qualify.

The qualification rules, too, are the same as last time around. A candidate can qualify by polling — hitting 1 percent in three separate polls released on or before July 16. (These can be national or early-state polls from approved polling organizations.) A candidate can also qualify by raising money from at least 65,000 unique donors (with at least 200 donors each in 20 states).

If more than 20 candidates meet either the polling or the donor threshold, a tiebreaker kicks in. Those who met both thresholds will get the advantage. After that, whoever is polling best under the standard the DNC laid out will win out. (First, they’ll average each candidate’s top three poll results to see whose is highest. If there’s still a tie after that, whichever candidates have hit 1 percent or more in the greater number of polls overall will win out.)

It’s likely that all or almost all of the candidates who made the stage last time will qualify again. One exception is Rep. Eric Swalwell of California, who quit the race last week and whose spot has therefore gone up for grabs. Gov. Steve Bullock of Montana, who missed the cut last time, seems likely to get it.

Rep. Seth Moulton of Massachusetts; Miramar, Florida, Mayor Wayne Messam; and former Alaska Sen. Mike Gravel, who all failed to qualify last time, will likely fail to do so again unless there’s a late polling surprise. Two more recent entrants into the race — former Rep. Joe Sestak of Pennsylvania and billionaire Tom Steyer — also seem unlikely to meet the polling threshold in such a short time.

All that is to say that the most likely outcome is that it will be the same 20 candidates as the last debate, except with Swalwell replaced by Bullock.

Because putting 20 candidates onstage together would be absurd, this second debate, like the first, will be a two-night event, with each night featuring 10 candidates. CNN has said the lineup for each night will be determined by a drawing, to be conducted this Thursday.

Now, when NBC News did a similar drawing for the first debate, it separated the candidates into two groups — those who polled at 2 percent or above, and those who did not. It drew randomly from within each group but ensured the groups as a whole would be split evenly among the two nights.

This seemed to be an effort to prevent all the top-polling candidates from being randomly placed on the same night (which would create a dynamic where there was one clearly top-tier debate and one “kids’ table” debate).

This only sort of worked. By luck of the draw, four of the top five candidates overall — Biden, Sanders, Harris, and Buttigieg — ended up together on the same night, with Warren excluded. (Warren was sorted with a few candidates polling just barely above 2 percent by NBC’s standards — Booker, O’Rourke, and Klobuchar.) If ratings are any indication, this wasn’t a huge problem, though.

Now it’s CNN’s turn. Theoretically, CNN could use the same methodology as NBC. Or it could define the top-tier candidates more exclusively — say, at candidates polling above 5 percent, or 10 percent. Or it could just draw completely randomly from the overall pool of 20 qualifiers.

And while this may all seem rather technical, it’s clear from last time around that this could matter a great deal. Last time, Warren, who had been on the rise before the debate, was assigned a night with no other top-tier candidates. This meant she had no opportunity to challenge Biden or Sanders face to face, but it also let her be the star of the first night (an opportunity that, say, Buttigieg might have liked to have had).

Even more importantly, if Harris and Biden had not been assigned to the same night, she would not have had the chance to directly confront him about his comments on working with segregationist senators and his record on busing. This was one of the most important moments in the entire race so far — it damaged Biden, the longtime frontrunner, while propelling Harris from a distant fourth place to a tie for second.

Meanwhile, the host of other candidates in the race will have even more immediate concerns — because this debate might very well be their last chance.

That’s because the standards for making September’s third debate are significantly tougher. First, candidates have to hit 2 percent or more in at least four polls between June 28 and August 28. Then, they also need to have 130,000 unique donors. Rather than 20 candidates making the cut next time, then, there could be 10 or even fewer. So for most of the field, CNN’s two-night event could be their final opportunity to make their case to a national audience. The pressure, then, will be on.