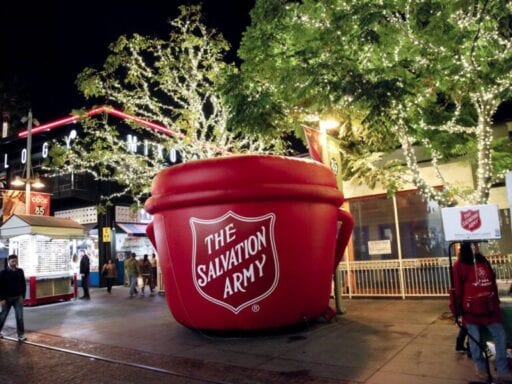 The organization does a lot to help underserved people, including members of the LGBTQ community. Still, it has a long history of alleged discrimination.

It’s been a somewhat tough holiday season for the Salvation Army. First, Ellie Goulding threatened to cancel her performance at the NFL’s Thanksgiving Day halftime show — intended to coincide with the beginning of this year’s Red Kettle Campaign — because of allegations over the Salvation Army’s history of discriminating against the LGBTQ community. Then, Chick-fil-A announced it was changing its philanthropic structure and would no longer donate to organizations that have been linked with anti-LGBTQ causes (at least for now), cutting the Salvation Army off from hundreds of thousands of dollars in potential contributions.

Goulding ended up performing at the halftime show after all, and Chick-fil-A later clarified that it hadn’t entirely ruled out donating to faith-based groups in the future, but the reputational damage was already done.

In late November, David Hudson, national commander of the Salvation Army, wrote an op-ed for USA Today in which he essentially dismissed the allegations of discrimination as fake news. (The organization uses military terms like “commander” to refer to its leadership; its members are called Salvationists.)

“Why take the time to read, research, and rebut when we can simply scan and swipe?” wrote Hudson, the organization’s highest-ranking US official. “Assumptions are regularly presented as foregone conclusions, and facts are drowned out by fiction.”

Hudson listed examples of the many good things the Salvation Army does for people in need, including members of the LGBTQ community, who are more likely to experience homelessness. Among those examples:

“[W]hile we can’t claim an exact number, we believe by sheer size and access that we are the largest provider of poverty relief for people in the LGBTQ community,” Hudson wrote, adding that the organization’s critics are hurting the very community for which they claim to advocate. He continued:

[B]ecause our organization is rooted in faith, a chorus repeatedly rises that insists we are anti-LGBTQ. And that refrain is dangerous to the very community we are wrongly accused of rejecting. At minimum, perpetuating rhetoric that vilifies an organization with the reach, housing, programming, and resources that we have in place to lift them up is counterintuitive and inefficient. But when that organization depends on the generosity of donors to provide much-needed assistance to so many across all walks of life, it’s devastating.

Hudson didn’t exactly tell the whole truth about the history of the Salvation Army, which has previously come under fire for discriminating against LGBTQ people. Time and time again, the organization denies having anti-gay bias, even though the paper trail documenting anti-gay stances goes back decades. (The organization did not respond to The Goods’ request for comment.)

The Salvation Army’s origins date back to mid-19th century England. Founded by minister William Booth in 1852, the organization initially focused on preaching to marginalized people, including the poor and homeless. Although it’s since evolved into a massive international organization known more for its charitable work than for its ministering, the Salvation Army has never really strayed from its religious roots — or from its use of military allusions.

“From the very start, Booth was ready and willing to go with the army metaphor,” Diane Winston, the author of Red Hot and Righteous: The Urban Religion of the Salvation Army, told NPR in 2009. “Initially, Booth did not want to start a church. He saw himself as an evangelical organization who would bring the poor and un-churched to other churches,” she added, but it quickly became one, since many churches at the time “were not receptive to having poor people in them.”

According to Winston, the Salvation Army expanded to the US in 1880 after a few of Booth’s “soldiers” moved to Philadelphia. Its now-ubiquitous Red Kettle Campaign — for which bell-ringers collect donations outside stores and shopping malls every holiday season — didn’t start until the 1890s, and it didn’t begin as a well-planned fundraising campaign either. Instead, according to Winston, one Salvation Army member in San Francisco came up with the idea on the fly when he needed to raise funds for a Christmas banquet.

Today, the money collected through the Salvation Army’s annual bell-ringing fundraiser helps provide services for more than 25 million people in the US each year, according to the organization’s website.

Each year, the Salvation Army’s bell-ringers post up on sidewalks and outside storefronts to collect donations, marking the unofficial start of the holiday season. And each year, the Red Kettle Campaign ignites a fresh wave of controversy over the organization’s longstanding anti-LGBTQ practices, which the Salvation Army says it’s been trying to reform.

In 2013, transgender activist and writer Zinnia Jones compiled a timeline of the Salvation Army’s history of discrimination against LGBTQ people, both passively and actively. A few highlights:

In 2011, the New York Times interviewed a man who claimed the Salvation Army denied him and his boyfriend shelter in the ‘90s “unless we broke up and then left the ‘sinful homosexual lifestyle’ behind,” the man, Bill Browning, said. “We slept on the street, and they didn’t help when we declined to break up at their insistence.”

The Times also published the Salvation Army’s “Position Statement” on homosexuality, which has since been deleted from the organization’s website:

The Salvation Army does not consider same-sex orientation blameworthy in itself. Homosexual conduct, like heterosexual conduct, requires individual responsibility and must be guided by the light of scriptural teaching. Scripture forbids sexual intimacy between members of the same sex. The Salvation Army believes, therefore, that Christians whose sexual orientation is primarily or exclusively same-sex are called upon to embrace celibacy as a way of life.

In 2017, ThinkProgress reported that the Salvation Army’s substance abuse center in New York City had engaged in discriminatory behavior against transgender people. The center was one of four New York-based facilities that was found to engage in violations of city laws, including refusing to accept transgender people as patients, assigning rooms to transgender people based on their assigned sex at birth, and requiring transgender patients to undergo physical exams to determine whether they were on hormone therapy or had undergone surgery.

The organization’s apparent stance isn’t limited to the US: Salvation Army centers in New Zealand and Scotland have lobbied against the repeal of anti-LGBTQ laws.

The Salvation Army is quick to go on the defense whenever the backlash against it reignites.

“Most of the information fueling these concerns is based on outright false or incomplete information,” Ralph Bukiewicz, commander of the Salvation Army’s Chicago Metropolitan Division, told the Chicago Tribune in 2012. “But every year it seems to resurface and recirculate.”

More recently, communications director David Jolley told Out the organization has reformed its policies, adding that any discriminatory practices weren’t top-down directives, but rather stand-alone instances.

“If anyone needs help, they can find it through our doors,” said Jolley. “Unfortunately, as a large organization, there have been isolated incidents that do not represent our values and service to all people who are in need.”

Critics maintain that such instances of discrimination aren’t isolated, but instead point to the contradiction at the heart of the Salvation Army’s work: The organization provides services to people experiencing poverty and homelessness, many of whom are LGBTQ, while also espousing beliefs that contribute to discrimination against LGBTQ people.

Jacob Meister, board chair of the Chicago-based LGBTQ advocacy group the Civil Rights Agenda, said the organization needs to align its values with the work of its shelters.

“The Salvation Army needs to be open and affirming of all LGBTQ rights,” Meister told The Goods, “and come out and publicly take a stand in favor of marriage equality, trans rights, and be open and accepting of gender identity, and break free of those antiquated stereotypes that they help to perpetuate.”

In his recent op-ed, Hudson explained that even if some Salvation Army leaders are themselves anti-gay, their personal beliefs are outweighed by the services the organization provides to at-risk LGBTQ people.

“It’s true,” Hudson wrote, “that the Salvation Army’s pastoral leaders, who subscribe to the international tenets of the church on which we are founded, do themselves adhere to a traditional biblical definition of marriage — that’s also true of the leaders of most churches around the world.”

In other words, the Salvation Army does provide lifesaving services, including food and shelter, to LGBTQ people facing homelessness, but it also appears to have no problem with its leadership potentially expressing homophobic views that help contribute to broader discrimination against LGBTQ people.

“The Salvation Army speaks out of both sides of its mouth,” Meister said. “They’ll deliver services to LGBTQ folks, but on the other side, they are very actively, as a religious organization, opposing marriage rights and a lot of other rights. Transgender issues have been one, particularly, that they have had problems with.”

LGBTQ youth are disproportionately vulnerable to homelessness. A 2017 report by Chapin Hall at the University of Chicago found that LGBTQ young adults were 120 percent more likely to experience homelessness than straight, cisgender people in the same age range. The high rates of homelessness among LGBTQ youth are often due to homophobia in their families or in their communities.

I tried to write an essay about productivity in quarantine. It took me a month to do it.
Trump’s expanded travel ban just went into effect for 6 new countries
Louise Glück just won the Nobel for literature. This poem will introduce you to her work.
Unpacking the twisty genre of political fanfiction through Curtis Sittenfeld’s Rodham
Trump’s push for “law and order” only led to more chaos in DC overnight
6 winners and 5 losers from the 2020 Oscars