The Sanders-Warren dispute about how to pay for Medicare-for-all, explained 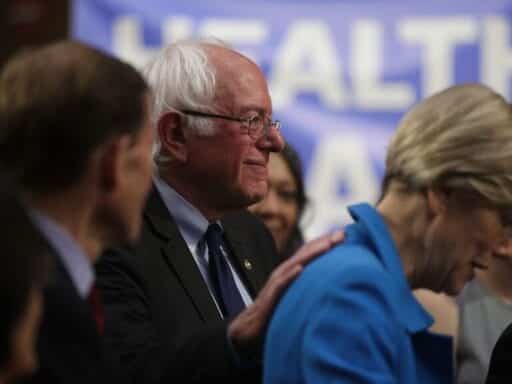 Bernie’s plan is more technically sound, Warren’s may be an easier sell.

Sens. Elizabeth Warren and Bernie Sanders agree on the broad contours of what the American health care system should look like — universal enrollment in a government program that provides care with no premiums, deductibles, or co-payments financed largely by taxes on the rich, and cuts in payment rates to pharmaceutical companies, hospitals, and other health industry players.

But they do disagree in part on how to finance the rest of it.

Warren, in an effort to craft a plan she characterizes as featuring zero tax increases on the middle class, wants to create an “employer contribution” into the Medicare-for-all fund. Sanders, by contrast, has not released a fully detailed plan. But his office has long touted an employer-side payroll tax as part of the answer. And in comments on Sunday in response to Warren’s plan, he wedded himself more clearly to that idea, saying his approach is “far more, I think, progressive, because it’ll not impact employers of low wage workers but hit significantly employers of upper income people.”

The practical stakes of this argument are low. The odds of any kind of Medicare-for-all plan actually being enacted by Congress are slim. And obviously anything a potential President Sanders signed into law would have to be something Sen. Warren voted for and vice versa.

But it is worth understanding why these two similar sounding ideas are actually very different in their implications. It underscores that the real challenge of legislating is that you can’t just write down a plan, you need to build a consensus in Congress for your specific approach.

It’s also an interesting counterpoint to some of the prevailing narratives around Sanders and Warren. In this case, Sanders is the one putting more emphasis on technocratic soundness, while Warren seems more attuned to populist politics.

A payroll tax is just a tax on salaries, assessed either on the employer or the employee. Payroll taxes finance Social Security and the bulk of Medicare under the current American system, and are widely used as part of the revenue base for European welfare states.

Payroll taxes can assessed on employers or employees. In the case of Social Security, half the burden falls on employers and half on employees. Economists widely believe that it doesn’t actually matter who formally pays the tax, the result in either case is to reduce workers’ take-home pay. Sanders’s vision for financing Medicare-for-all includes raising employer-side payroll taxes by 7.5 percentage points in order to raise roughly $3.9 trillion over 10 years.

On average, this is less than what employers are currently spending on premium contributions for their employees, so workers and employers should generally come out ahead under this system. But those broad averages mask a wide range of impacts.

According to the Kaiser Family Foundation, the average employer contribution for a single person’s health insurance in 2016 was $5,946. Sanders’s employer-side payroll tax would be less than that for workers earning below $80,000 a year but higher for more affluent workers. For family coverage, the average employer contribution was $14,561 which would make the cutoff point about $194,000 in household income.

On the other hand, lower income households, who currently don’t get employer-sponsored health insurance, could find themselves getting very robust coverage in exchange for a very modest tax increase. Some low-income families are already getting free insurance from the government through Medicaid — those families might end up seeing a small reduction in take-home pay in order to swap one government insurance plan for another.

Of course, even families whose take-home pay diminished somewhat due to Sanders’s payroll tax would reap benefits in the form of eliminating co-payments and deductibles. The point is that while the structure of Sanders’s plan is broadly progressive and broadly beneficial to most households, the exact calculus of who ends up ahead and who does not hinges on a complicated set of factors.

Elizabeth Warren’s employer contribution idea is designed to be simple

Warren’s plan, by contrast, asks companies with over 50 employees to simply calculate their current average expenditure on health insurance and pay 98 percent of that total to the government.

The virtues of this plan are twofold.

Compared to Sanders’s plan, Warren’s plan is more favorable to the interests of high-income earners (the part that Sanders likes to emphasize) but also more favorable to Medicaid recipients (probably a framing she would prefer) since there’d be no extra tax on them.

Her plan also generates some odd inequities. Right now, a company that spends more on its employees’ health insurance gets something in exchange — happier, more generously compensated employees. Under Warren’s plan, that company would end up paying higher fees to the government but every worker would get the same insurance plan — in effect putting the previously more generous companies at a disadvantage.

In the short term this would generate more whining than actual problems. But over time it would be increasingly unsustainable. So Warren says that “over time, an employer’s health care cost-per-employee would be gradually shifted to converge at the average health care cost-per-employee nationally.” If you ignore the transition period and just think about the long-term result, Sanders is proposing a flat tax on wage income while Warren is proposing a kind of regressive employer poll tax.

Bernie the technocrat vs. Warren the populist

The odds of these bills passing Congress are extremely low. And even if it did, Congress would write the bill and there’s no reason to think either Sanders or Warren have fundamental, principles-driven objections to either way of doing this.

But the plans candidates release are illustrative of how they think about things, and this particular case is interesting because it runs somewhat contrary to the stereotype.

Warren has much more of a reputation as the uber-wonk with plans for everything, while Sanders is seen more as a moralist and a populist who cares less about the technical merits of proposals than whether they illustrate underlying points.

In this particular case, however, that dynamic is reversed. It’s Warren whose plan optimizes for easily illustrating the point that almost everyone’s costs will go down, even at the cost of embracing a vision that’s not going to be technically sustainable for very long. She’s then vague about the timing of the transition off her plan, and is going to transition to something that’s probably a worse deal for many people than a more technocratic alternative would be.

Sanders, by contrast, is proposing a big new broad tax, even though big new broad taxes tend to be unpopular. This is how foreign single-payer systems are typically designed, and it’s almost certainly what a team of policy wonks would recommend if they were setting all political considerations aside.

Life (and politics) is more complicated than stereotypes. The exigencies of a presidential primary require leading politicians to differentiate themselves against each other, at times in somewhat arbitrary ways. Governing requires the reverse, the building of consensus and coalitions. For now, though, the opposite dynamic is taking root: Even the most ideologically similar candidates are diverging in their plans and moving away from consensus about how exactly to redesign the health care system.

Trump and the “P Act,” debate over face coverings: Friday’s coronavirus news
The Supreme Court has closed its building to the public due to coronavirus
How to watch Trump and Biden’s dueling town halls on Thursday
The emerging long-term complications of Covid-19, explained
The extraordinary danger of being pregnant and uninsured in Texas
Exclusive: Elizabeth Warren and Sherrod Brown’s plan to protect consumers from financial ruin