The Senate bloc that could decide Kavanaugh’s Supreme Court confirmation 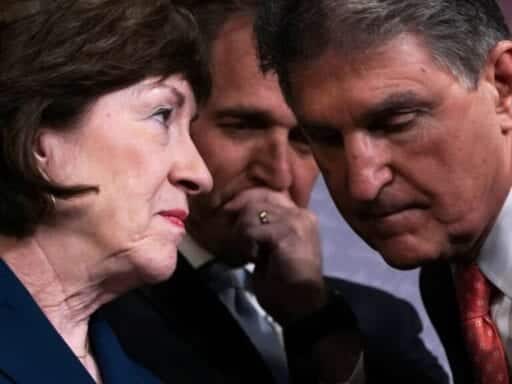 All eyes are on Susan Collins, Jeff Flake, and Joe Manchin with a floor vote mere days away.

True, there are other swing votes: Lisa Murkowski (R-AK) and Heidi Heitkamp (D-ND), most notably. But the available evidence suggests that the votes of Collins and Flake, as well as Manchin, the most closely watched Democrat, will be decisive.

Because they have been working together over the last few days, there is a belief that they will end up voting the same way. That isn’t a guarantee, of course, but the three senators could function as a voting bloc, dictating the fate of Kavanaugh’s confirmation.

They each had their own journey to the middle of the most contentious Supreme Court fight in 30 years. Flake is the retiring Never Trump Republican, torn between his crusade for civility and decency and his allegiance to the GOP. Collins is the moderate Mainer who already defied her party on Obamacare repeal and who has a strong record of supporting women’s rights. Manchin is up for reelection in the country’s most pro-Trump state, and though he looks unexpectedly strong in his campaign, that could change in an instant if Manchin takes an unpopular vote to block Trump’s handpicked Supreme Court nominee.

They’ve been seen huddling together, charting out a path forward. Collins and Manchin supported Flake’s demand that the FBI investigate the sexual assault allegations against Brett Kavanaugh, as did Murkowski, and Collins met with Flake the night before he took his dramatic game-changing stand.

But mere days from an expected floor vote, nobody is sure what these three will do. They hold Kavanaugh’s nomination, and the future of the nation’s high court, in their hands.

Of any Republican, Murkowski seems the closest to a sure “no” vote. She has publicly stated that the question before the Senate is whether or not a woman who has been sexually assaulted is to be believed. She also revealed amid the heat of the Kavanaugh debate that she has had her own #MeToo moment in the past.

The evidence seems to suggest Murkowski is a “no” vote on Kavanaugh. But that can’t be taken for granted, not until the vote is cast. The Alaska senator has earned a reputation with her inscrutable nature, especially when the pressure is highest.

But even if Murkowski votes “no,” Kavanaugh could still be confirmed. At least one more Republican senator — Collins or Flake being the likeliest candidates — would need to join her. None of the Democrats — Manchin, most importantly — would be able to cross the aisle and vote for him either. The 51-49 Senate split leaves little room for error for either party.

We’ve seen the same dynamic with tough votes on Obamacare repeal and tax reform. It takes a group to tank something — and one person to save it. Nobody wants to be the 51st vote in any direction.

That’s why Flake, Collins, and Manchin could work as a unit. Voting as a bloc gives each of them cover for what will be a difficult vote no matter where they come down.

A centrist coalition on Kavanaugh’s nomination started to come together the day of the riveting Senate hearing with Christine Blasey Ford and Kavanaugh. (Ford and two other women have accused Kavanaugh of sexual misconduct or assault, allegations he has denied.) CNN reported that Flake met with Collins, Manchin, and Murkowski that day. Prominent Senate reporters, such as Politico’s Burgess Everett, have said that a group of centrist Democrats and moderate Senate Republicans would vote together.

Donnelly, Manchin, Murkowski and Collins are all expected to vote the same way, per senators and aides

Since those reports started to come out, Donnelly has announced he would oppose Kavanaugh, and Murkowski has appeared to drift away from Republican leaders. But the other three have remained firmly, almost comically undecided. And all eyes have turned to Flake, who engineered the one-week delay on the Kavanaugh vote so the FBI could perform its investigation into the sexual assault allegations against the judge.

Because Collins and Manchin have largely stayed silent on how they’ll vote, Flake has attracted all of the attention as he has spoken publicly and repeatedly about Kavanaugh in the last few days.

While Flake has been litigating his confused feelings publicly, the others in the group have been quieter. Collins chided the president’s comments about Ford but she has stayed evasive on her intentions for Kavanaugh’s confirmation. Manchin has also tried to keep his powder dry for the past two weeks.

NEWS: Manchin has gone from undecided on Kavanaugh to “totally undecided”

Before calling for reopening the FBI background check, Flake had said he would vote in favor of Kavanaugh’s nomination Friday morning. His rationale: “What I do know is that our system of justice affords a presumption of innocence to the accused, absent corroborating evidence,” Flake said in a statement.

If not for the allegations of sexual misconduct, Flake would have been an easy vote for Kavanaugh. He said as much last Friday after pushing for the FBI’s investigation: “I’m a conservative. I would love to see Judge Kavanaugh be confirmed, and I hope to be able to do that. But I want a better process,” Flake told reporters at the Capitol.

Since then, Flake has positioned himself on every side of the debate around Kavanaugh — always leaving himself room to vote in favor of the judge, but never quite committing either.

For those who have followed Flake closely in the Senate, he’s known for this kind of mercurial behavior — and he usually ends up siding with his own party. But this week, even Flake said he sometimes feels “like a man temporarily without a party.”

The wild card has been the FBI report that Flake forced Republican leaders to allow. All three senators have said they’re waiting to see the results before they make a final decision. But given the nature of Ford’s allegations, and the very narrow scope of the investigation that the White House has authorized, it seems unlikely that any definitive proof, one way or the other, is likely to settle the matter.

If the FBI’s report doesn’t provide any more clarity, Flake has a decision to make: Is the greater risk denying an innocent man his seat on the Supreme Court — or letting a man accused of sexual assault on to the nation’s highest court for life?

But Flake isn’t alone as he agonizes over the vote. At least two other senators, caught in the political storm of the century, will have to make up their minds too.

Trump uses Border Patrol agents as props during Fox News interview
Some front-line workers are now eligible for the vaccine. Employers might pay them to get it.
Why John Roberts won’t save the impeachment trial from partisanship
Exclusive: State Department officials warned Trump not to revoke protections for immigrants
She lost her son to addiction, then lost her house to save her daughter
Sharp Objects shows that men can’t comprehend a dangerous woman in “Fix”