The Senate GOP’s leverage on the coronavirus bill is shrinking 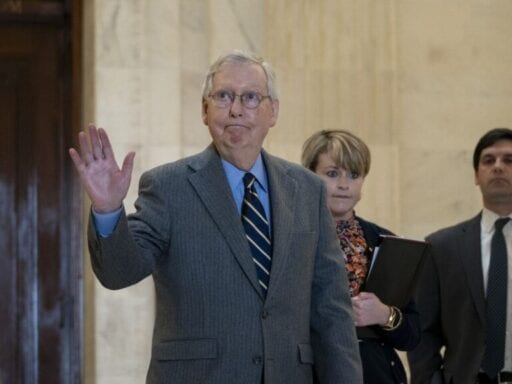 Five Republicans are now in self-quarantine. The math weakens the GOP’s leverage.

Senate Republicans are facing a major challenge when it comes to passing the $1.8 trillion coronavirus stimulus bill: They don’t quite have the leverage they once did as senators self-quarantine in response to the virus.

When the full Senate is able to vote, Republicans have a 53-47 majority. But Kentucky Sen. Rand Paul announced on Sunday that he tested positive for Covid-19, the disease caused by the coronavirus, prompting several other Republican senators to self-quarantine. Since five GOP senators are now in isolation because they’ve either been diagnosed with Covid-19 or exposed to someone who did, the party margins in the upper chamber has shifted to 48-47.

The change matters because it means that Republicans are in even greater need of Democratic support in order to pass what is shaping up to be a massive $1.8 trillion bill. To get through the Senate, the stimulus needs 60 votes. Previously, that meant convincing at least seven Democrats to back the legislation. Now, it means winning over at least 12.

Right now, Republicans don’t even have more conservative Democrats on board. Democrats were unified in their opposition to the bill on Sunday, when they shot down a procedural vote to allow the stimulus bill to move forward on a final vote of 47-47.

Paul’s positive test for Covid-19 could have major implications for how many Republican senators are able to be physically present for votes in the coming days, especially if Senate Majority Leader Mitch McConnell continues to oppose any form of remote voting.

After Paul’s office announced his diagnosis, Utah’s two senators — Mitt Romney and Mike Lee, both Republicans — said they would self-quarantine due to their recent proximity to the Kentucky senator and would thus be unable to vote.

Romney, who sits next to Paul in the Senate, will be tested for the coronavirus. Lee’s office said that while he is showing no symptoms and has been advised he doesn’t need a test, he will still self-quarantine for two weeks. Sens. Cory Gardner (R-CO) and Rick Scott (R-FL), meanwhile, are also in self-imposed quarantine after coming into contact with other individuals who tested positive for coronavirus. (Sen. Amy Klobuchar’s husband has tested positive, too, but as she has not seen him in two weeks, she is not being tested.)

Paul’s diagnosis has also spurred criticism from his colleagues, including Sens. Kyrsten Sinema (D-AZ) and Martha McSally (R-AZ), who called him out for taking a test roughly six or seven days ago but continuing to socialize and interact with other lawmakers in the interim. It’s possible that other Republicans, including those who’ve been near Paul in recent lunches and meetings, could also decide to self-quarantine.

The rapidly changing dynamics of the Senate voting math aren’t the only thing that Republicans have to worry about. There’s yet another test once the bill passes the Senate: the Democratic-controlled House of Representatives.

On Sunday, Speaker Nancy Pelosi announced the House is finalizing its own coronavirus stimulus package, separate from the Senate bill, titled the “Take Responsibility for Workers and Families Act.” Pelosi flew back to DC to participate in discussions this weekend, and the final package in the Senate will need her approval to make it through the House and to the president’s desk.

Pelosi has a litany of disagreements with the current Republican bill. In addition to the ones laid out by Senate Democrats, House lawmakers are concerned with the lack of additional SNAP funds and the lack of Occupational Safety and Health Administration language to protect workers.

“There is at this time a big difference between the Take Responsibility for Workers and Families Act and what the Senate Republicans are proposing,” Pelosi said in a “Dear Democratic Colleague” letter on Sunday night.

Monday will be critical to see if the gap between Democratic and Republican demands can close. The changing voting margins in the upper chamber — not to mention the urgency of the crisis — could very well put pressure on Republicans to offer more concessions to their colleagues on the other side of the aisle.