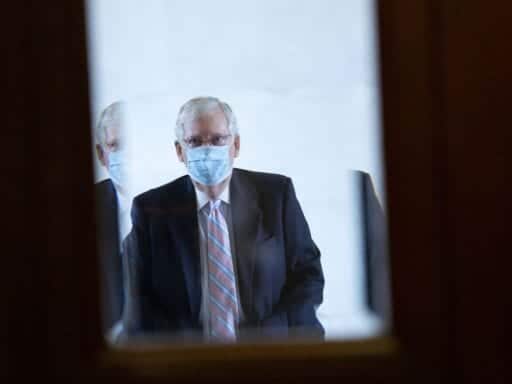 Senate Republicans are planning to vote on a “skinny” stimulus to put pressure on Democrats.

The Senate is back from its summer recess this week, though it’s unclear what — if anything — that means for progress on more stimulus for Americans dealing with the economic fallout of the coronavirus pandemic.

On the one hand, there is some movement: Senate Republicans have announced a vote on a new “skinny” stimulus bill, which is much narrower than what Democrats have proposed, that could take place as early as Thursday. According to Bloomberg, this bill is slated to include $500 billion to $700 billion in aid, a far cry from the $2.2 trillion Democrats have said they’re interested in allocating. That figure is down from the more than $3 trillion opening bid Democrats proposed in May.

Republicans’ proposal contains funding for a weekly $300 unemployment insurance supplement as well as support for school reopenings, the US Postal Service, small businesses and coronavirus testing. It does not include, however, additional money for state and local governments, or another stimulus check similar to the one-time $1,200 payment issued to all Americans making $75,000 or less in adjusted gross income.

Republicans introduced their new “skinny” bill Tuesday afternoon, and the vote on it will mark the most significant action the upper chamber has taken on a stimulus proposal in months. However, the bill is effectively a messaging vehicle, allowing Republicans to point to a tangible effort they’ve made to get aid out to people, and to put pressure on Democrats, who are expected to vote against it. (The House passed the HEROES Act in May, but the Senate has declined to take it up since.)

Because of Democratic opposition, the bill likely won’t get the 60 votes it needs to clear a filibuster threshold and advance. If it fails, Congress will ultimately be left at the same impasse it has been stuck at for weeks. And against this backdrop, this week’s vote functions primarily as a way for Senate Majority Leader Mitch McConnell to squeeze Democrats on a reduced aid proposal, while ginning up campaign material for battleground lawmakers.

“Working families must not suffer more than necessary because Democrat leaders think citizens’ pain may help their political fortunes,” McConnell said in a statement on Tuesday. “The Senate will vote and the American people will be watching.”

Democrats have long said that the scope of the current economic crisis, which has resulted in more than 30 million people filing for unemployment, over 100,000 small businesses closing permanently, and thousands of evictions, requires an expansive solution, which Republicans have balked at. Democrats have also emphasized that they passed stimulus legislation in the House three months ago — and aren’t the ones dragging their feet.

“This emaciated bill is only intended to help vulnerable Republican Senators by giving them a ‘check the box’ vote to maintain the appearance that they’re not held hostage by their extreme right-wing that doesn’t want to spend a nickel to help people,” Senate Minority Leader Chuck Schumer and House Speaker Nancy Pelosi said in a Tuesday statement responding to Republicans’ plans.

While it’s possible a failed vote on the Republican bill this week could inject new energy into ongoing stimulus negotiations, and push both parties to offer fresh concessions, it’s also likely that the current stalemate will simply continue. In the meantime, millions of Americans are still waiting on much-needed aid.

Senate Republicans are trying to put pressure on Democrats

Republicans’ vote on their “skinny” bill this week is an effort to put further heat on the Democrats as November’s general election approaches. According to a CNBC/Change Research survey that came out in early August, voters in swing states have blamed both parties roughly equally for the expiration of enhanced unemployment insurance. More Republican senators than Democrats, however, are vulnerable this cycle, according to Cook Political Report, meaning equal blame could nevertheless result in greater electoral losses for the GOP come November.

Since Democrats are expected to vote down Republicans’ bill this week, the GOP could use this fact as campaign fodder in key swing states including Arizona and North Carolina, two of the places that are seen as narrow toss-ups that could ultimately determine which party controls the Senate next term. As Schumer and Pelosi noted, incumbent Republicans in battleground states could use this vote to argue that they’re focused on helping their constituents while Democrats are obstructing aid.

The issue with this framing, though, is that it omits Republicans’ longstanding role in blocking a more expansive aid package — including the extension of a weekly $600 in supplementary unemployment insurance.

For months, Republicans have resisted supporting a more generous stimulus package because a notable faction in their conference, led by critics including Sens. Rand Paul and Ted Cruz, is averse to any additions to the deficit. Earlier this summer, for example, McConnell offered up a trillion-dollar proposal that garnered internal pushback.

The amount any package allocates for unemployment insurance as well as funding for state and local governments is a recurring point Republicans have cited in their opposition to more stimulus. They’ve argued that the weekly supplement should be reduced, so people aren’t incentivized to stay on unemployment instead of returning to work, and have suggested that states will use federal funding to address budget gaps they were facing before the coronavirus pandemic. Democrats, meanwhile, note that there aren’t presently enough jobs for people to return to — and argue states are in desperate need of funds because of the pandemic itself, pointing to cuts to key social services that states have already had to make due to revenue shortfalls.

The expected failure of the bill vote this week will likely add some pressure to both parties, with Republicans compelled to continue working toward a compromise and Democrats forced to continue explaining their opposition to the limited funding that’s been offered.

The impasse has persisted as another government funding deadline approaches

While the vote this week could help spur new action, it could also leave lawmakers in pretty much the same place they’ve been for some time. If the outcome is the latter, Congress has a few weeks until it’s set to leave for recess yet again in early October to attempt another round of negotiations — and get something done. Recently, there has been some indication that both Republicans and Democrats are willing to negotiate further.

“The president and I believe we should do more stimulus,” Treasury Secretary Steven Mnuchin, one of the main negotiators for the White House, said during an appearance on Fox News Sunday over the weekend. Democrats, too, have said they’re eager to approve more funding, though they’ve stood firm on avoiding narrower measures.

“Democrats want to work on bipartisan legislation that will meet the urgent needs of the American people but Republicans continue to move in the wrong direction,” Schumer and Pelosi said Tuesday.

The negotiations on the stimulus are also taking place as a deadline over government funding looms at the end of this month. If that deadline isn’t met, the federal government will be forced to shut down, lacking the funds needed to pay worker salaries and maintain services run by agencies including the IRS and the Food and Drug Administration.

Lawmakers on both sides of the aisle have signaled, however, that they’re open to advancing a continuing resolution that would keep the government funded in the short term, preventing any potential government shutdown.

At the very least, they appear keen to avoid that particular disagreement for now.

The 2 best ways to hold companies to their climate commitments
Polls show Trump is losing ground where the coronavirus is surging
The case for Senate Democrats to boycott Amy Coney Barrett’s confirmation hearing, briefly explained
Trump won’t rule out that his business will benefit from emergency coronavirus legislation
This week in TikTok: And the most popular video of the year is ....
Joe Biden is in trouble over a fundraiser tied to a fossil fuel company