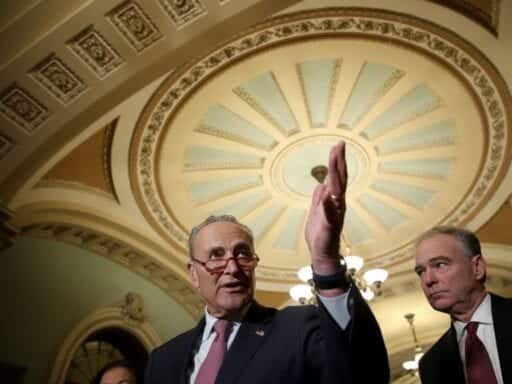 Forcing this vote was part of Democrats’ strategy to renew messaging on health care.

Ahead of the start of open enrollment, which begins this Friday, Senate Democrats are trying to send the Trump administration a pointed message: Steer clear of the Affordable Care Act.

In a vote on Wednesday, Democrats sought to overturn one of the administration’s most recent attempts to undermine the health care legislation: a rule that would give states more flexibility in the types of plans they could use ACA subsidies to purchase.

Under the administration’s rule, states could request a 1332 waiver, which would enable them to buy and offer plans that Democrats see as low-quality options, including plans that could discriminate against patients with preexisting conditions — rolling back one of the key accomplishments of the ACA.

To undo the rule, Democrats forced a vote on a resolution of disapproval, a measure that can be used to overturn administration regulations with a simple majority in the House and Senate. Trump, however, has the ability to veto this measure.

The resolution wound up falling short of the votes it needed, with a vote of 43-52, a sign that not enough Republican lawmakers were willing to break with their party on this front.

It’s worth noting, however, that the rule itself has not yet led to any states taking up these waivers in this way, as highlighted by The Washington Post’s Paige Cunningham. While it’s still a relatively new option and states could certainly capitalize on it down the line, this context underscores how much Wednesday’s vote primarily served to bolster Democratic messaging.

Messaging, after all, is what Senate Democrats’ renewed push on the ACA is all about. This week’s vote was intended to demonstrate how united lawmakers remain in protecting the law — while simultaneously forcing a slew of vulnerable Republicans in swing states to take a stance on it.

Defending the Affordable Care Act, especially the protections that it offers people with preexisting conditions, was a core plank of Democratic messaging in the 2018 midterms and it’s poised to serve as pivotal one yet again in the 2020 cycle.

This vote also marks the latest bid from Democrats to call attention to rule changes by the Trump administration. Previously, senators have attempted to undo rules that loosen pollution regulations for power plants, for example.

These votes help serve two purposes for the party: They signal an attempt to oppose the Trump administration despite being the minority — and they generate fodder for possible campaign attacks as the election rapidly approaches.