The Senate represents states, not people. That’s the problem. 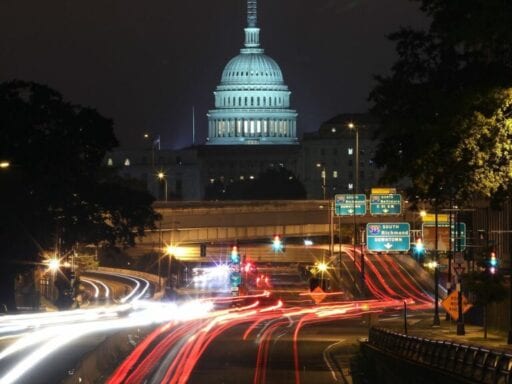 States as states do need representation in the federal government. Under the Constitution, they have far too much.

The confirmation of Brett Kavanaugh to the Supreme Court last week spurred a lively discussion about institutional design.

After the vote a week ago, some noted that the 50 senators who voted to confirm represent about 45 percent of the population.

A number of astute constitutional historians quickly spoke up to point out that of course that happens, because the Senate represents states and not people. If you want to see the people represented, look to the House.

But of course, the fact that the Constitution does something isn’t the same as that something being good. We continue to debate the Constitution itself, and specifically the disproportional Senate. If our intuition tells us that there’s something wrong when a minority has that much power, we should pay attention. The Senate’s equal representation of states — not people — should be discussed on its merits.

I don’t think it stands up.

The case for states

The United States is a federal system. Each state has its own sovereignty and has some authority over its own interests. The relative authority of the state and the national government is contested, but the states retain something.

But since the federal government is so powerful, the states need a way to protect themselves. The Framers’ approach to this sort problem is to let ambition check ambition. The legislature and the president check and balance each other. Similarly, the states are not protected from the federal government by mere parchment barriers. They can defend themselves through their representation in the Senate.

These concerns were central for the Framers, who were looking at the Constitution from the very state-centered perspective of the Articles of Confederation. Each state had its own government and identity, and their relationship to one another was weak. The Constitution aimed to make that relationship stronger, but states were still the players. An American was a citizen of their state first, and of the union second.

The case for people

We have come a long way since the founding. Political scientist Daniel J. Hopkins, in his new book, The Increasingly United States, traces how America has gone from “all politics is local” to a world in which national issues dominate even local conflicts.

Hopkins devotes an entire chapter to the question of whether people think of themselves as Americans or as citizens of their states. Across a wide range of measures, he shows that Americans see themselves as Americans first, citizens of their states second. As he puts it: “Compared to their attachment to the nation as a whole, their place-based attachment is markedly weaker. What is more, the content of state-level identities is typically divorced from politics.”

That finding doesn’t mesh well with the idea of people being represented in government through their states. And citizens, politicians and parties have all long realized that. Political strategies for all national offices involve coordination across geography. If you live in a deep red state, you can donate to a candidate running in a purple one. If your district is safe for the Democrats, you can travel to canvass for a candidate in a swing district.

When Americans are hacking the Constitution to get around the geographic nature of our representation, that should be a red flag.

Balancing the representation of states and people

Of course, the Constitution does not only allow for the representation of states. The central debate at the constitutional convention was over precisely this balance. Doesn’t the House address that problem?

For one, because every state must have at least one member in the House, there are still distortions. But even aside from that, single-member districts means we’re still representing territory instead of people. These districts are almost impossible to draw so that the politicians elected reflect the balance of preferences across the entire country.

Right now, that means a bias toward Republicans. Democratic candidates could outpoll Republicans by up to five points and still not be favored to take control of the House. It doesn’t matter whether this is due to conscious gerrymandering or because Democratic voters are concentrated in urban areas. The problem is single-member districts in the first place.

I don’t know of any research to prove it, but I am pretty sure very few Americans think of themselves as first and foremost citizens of their congressional district.

Even the president, whom at least all citizens get to vote for, is elected through the Electoral College, which in turn filters votes through the states.

In short, the supposed balance between state interests and individual citizen interests that the Framers struck isn’t much balance at all. Some Framers observed exactly that at the time. And as the country has evolved, the value of having such strong representation for geography seems to have only waned.

What can be done?

If you agree that we should rethink the way in which we over-represent the states, what could be done? Unfortunately, not much.

One thing we can’t do is make the Senate more proportional. Nothing in the logic of federal representation would prevent this. In fact, other countries have upper chambers in legislatures that represent constituent states but that also represent them proportionally.

But we can’t do this, even with an amendment, because the only limit that Article V of the Constitution places on amendments is that “no State, without its Consent, shall be deprived of its equal Suffrage in the Senate.”

We could change the powers of the Senate. Why should a body whose unequal representation is justified by the need to protect federalism be so central in confirming Supreme Court justices, who rule on individual citizens’ rights? Why should it have a veto on any legislation that has nothing to do with states as states?

Around the world, most upper chambers are less powerful than the lower chambers that represent the people more directly. In the United Kingdom, the House of Lords can mostly only delay things that the House of Commons wants to do.

If the Senate is to be justified on the grounds that states need a say, its powers should be determined by that justification.

Such changes would be hard to do, and might not make enough difference. The other thing, then, would be to correct the imbalance in the House and the Electoral College. Multi-member districts could make the House more reflective of the popular vote.

If we’re serious about trying to bridge the divide between red and blue America, a good start would be to have all of America elect more of the legislature.