The Senate Republican divide over certifying the election results, explained 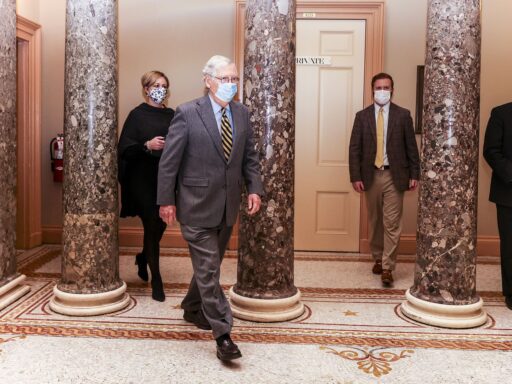 Elections in 2022 and 2024 hang over Senate Republicans’ certification vote.

Senate Republicans face a clear choice on Wednesday: They can either side with President Donald Trump and challenge the results of the 2020 presidential election based on no evidence — or they can vote in support of the actual outcome, the will of the voters, and the country’s Democratic process.

The decision should be an obvious one, but it has split the conference. While Senate leadership, including Majority Leader Mitch McConnell, has previously urged Republicans to refrain from objecting to the election results, at least 13 lawmakers, including Sens. Josh Hawley (R-MO), Ted Cruz (R-TX), and Ron Johnson (R-WI), have already expressed their plans to do so.

The Republicans opting to stand by Trump are doing so to send a message, one they argue is intended to represent concerns voiced by their constituents.

But another key motivation for those going down this route could well be the same one that’s kept so many Republicans aligned with Trump for years: They’re keen to hang on to the support he has from many GOP voters — including for upcoming elections in 2022 and 2024.

“One of the biggest threats Republicans do face, especially if they come from red states, is the threat of a primary challenge if they’re seen as insufficiently pro-Trump,” says Cook Political Report’s Jessica Taylor. “Probably nothing will matter more to Trump and his loyal base over the next few years unless you opposed the certification of electoral votes — even though it’s ultimately futile.”

And the objections are futile. Those who intend to mount these challenges are forging ahead despite there being no evidence to support the claims of voter fraud that Trump has cited as the reason behind his efforts to undercut the election’s outcome. As Cameron Peters has explained for Vox, at least 60 lawsuits detailing allegations of election improprieties have failed in court, and every state has now certified its results as accurate (following recounts in multiple swing states).

Nevertheless, Cruz and Johnson are among the 11 senators who’ve demanded a 10-day audit of election outcomes in “disputed states” and who’ve vowed to challenge the certification of their results if this doesn’t happen. Hawley has announced a separate objection, claiming legal issues with the election process in Pennsylvania. According to Politico’s Olivia Beavers, state results that Republicans in the House and Senate plan to object to include Georgia, Arizona, and Pennsylvania.

Congress’s vote on the outcome is one of the last steps needed to complete the presidential transition ahead of the inauguration later this month. On Wednesday, Vice President Mike Pence will read off the election results submitted by each state, giving lawmakers a chance to object to each. If a member from each chamber objects, a simple majority of lawmakers in both the House and the Senate must vote to support that objection for it to take effect.

The internal divide in the Republican caucus, briefly explained

For months, McConnell has cautioned Republicans against raising objections to the electoral results, because for every challenge that’s brought by both a House and a Senate member, both chambers will ultimately have to debate and hold a vote on it. And as the Associated Press has reported, McConnell has expressed concerns that these votes could put Republican senators in a difficult position.

Those who do vote with Trump are effectively rejecting voters’ voices and undermining the Democratic process that elections are built on. On the other hand, those who don’t back Trump could face his ire — and potentially that of his supporters — down the line, possibly setting up difficult races that could drain party resources and put the size of the Senate GOP caucus in jeopardy.

This dynamic has already been apparent in the case of Senate Majority Whip John Thune, whose opposed the certification challenges and previously said they would go down “like a shot dog” in the Senate. Since then, he’s been a major target of the president’s attacks, with Trump urging South Dakota Gov. Kristi Noem to levy a primary challenge against him in 2022. (Noem has declined and said she intends to pursue another term as governor.)

I hope to see the great Governor of South Dakota @KristiNoem, run against RINO @SenJohnThune, in the upcoming 2022 Primary. She would do a fantastic job in the U.S. Senate, but if not Kristi, others are already lining up. South Dakota wants strong leadership, NOW!

The 13 lawmakers who have announced their decisions to move forward with a challenge include a handful facing upcoming elections. Of those who’ve voiced support for electoral objections, Sens. James Lankford (R-OK), Ron Johnson (R-WI), and John Kennedy (R-LA) are up for reelection in 2022. Separately, there’s speculation that Hawley and Cruz could be potential presidential candidates in 2024, and may be using this vote to position themselves for that contest.

A Cruz spokesperson said in a statement, however, “Sen. Cruz is calling for an emergency electoral commission to resolve the deep distrust Americans have in our democracy and restore faith in our system.”

Those who have committed to these objections broadly represent reliably Republican states, with the exception of Johnson in Wisconsin and Sen. Kelly Loeffler in Georgia, a lawmaker who ran in the state’s runoff elections Tuesday.

“There should little or no question this will not succeed, so one must conclude it is simply one of the most blatantly hypocritical and cynical moves in American political history to incur favor with Trump supporters,” says Chip Felkel, a Republican strategist and adviser for the Lincoln Project.

According to national polls in November and December, a majority of Republican voters do question the presidential election results — which suggests that lawmakers’ objections could resonate with a wide GOP base. A Reuters/Ipos poll cited by Cruz and other Republicans mounting this challenge found that 67 percent of Republicans think the election was “rigged.”

“Those allegations are not believed just by one individual candidate. Instead, they are widespread,” the lawmakers write. They argue that their position is intended to assuage these concerns.

There is, of course, a lot of circular reasoning at play in this argument: A big reason many voters support Trump’s allegations of election fraud is because the president has been falsely hammering this message for months, and many Republican leaders have amplified his message.

There are also several Republicans facing reelection in 2022 who’ve opposed efforts to challenge the election certification, however, including Sens. Rob Portman (R-OH) and Lisa Murkowski (R-AK) — both of whom have said they want to help preserve existing trust in the electoral system.

“I urge my colleagues from both parties to recognize this and to join me in maintaining confidence in the Electoral College and our elections so that we ensure we have the continued trust of the American people,” Murkowski said in statement.

According to a Washington Post count, 25 Republicans have said they plan to vote against objections that are raised, while several others have yet to state how they’ll vote. Sens. Mitt Romney (R-UT), Susan Collins (R-ME), Ben Sasse (R-NE), and Pat Toomey (R-PA) are among those who’ve been vocal in their opposition to these challenges.

“We have a bunch of ambitious politicians who think there’s a quick way to tap into the president’s populist base without doing any real, long-term damage,” Sasse said in a December Facebook post. “But they’re wrong — and this issue is bigger than anyone’s personal ambitions.”

The willingness of some senators to question the Electoral College results signals that Trump still holds significant influence, at least with certain members of the Republican Party, but the fact the conference isn’t unified is a reminder that it’s unclear how his sway will persist as Congress enters its new term.

There is some expectation that Trump will continue to influence the party for some time. “Most, if not all, Republicans know that Trump and his voters are going to hold considerable sway in the party for the foreseeable future,” says University of Southern California law professor Franita Tolson.

Despite this, in the Senate, especially, leadership has grown more open to clashing with Trump as his term nears its end: Most recently, McConnell has stymied his demand for $2,000 stimulus checks, as well as his veto of the National Defense Authorization Act. Other members of the conference, however, have remained closely aligned with the president’s wishes.

The split on Wednesday votes could indicate more divisions among Republicans down the road.

“These fissures may be harbingers of infighting to come within the party that would resuscitate some of divisions last apparent back in 2015 when Trump appeared on the scene,” says University of Wisconsin political science professor Barry Burden.

As Politico’s Alex Isenstadt reported, the divergent stances that Hawley and Sen. Tom Cotton (R-AR) — another potential future GOP presidential contender, who opposes the election certification challenges — have taken could underscore fault lines between Trump’s anti-establishment backers and more traditional Republicans that may continue to play out in 2024 and beyond.

Puerto Rico just kicked out another governor
What April Democratic debate might look like — if it happens
The 7 most bizarre moments from Trump’s long-winded CPAC rant
Mueller has been questioning Michael Cohen on Trump’s Russia ties
Megyn Kelly wanted to be the next Oprah. Her split with NBC shows why that may never happen.
5 questions about Watchmen’s season one finale