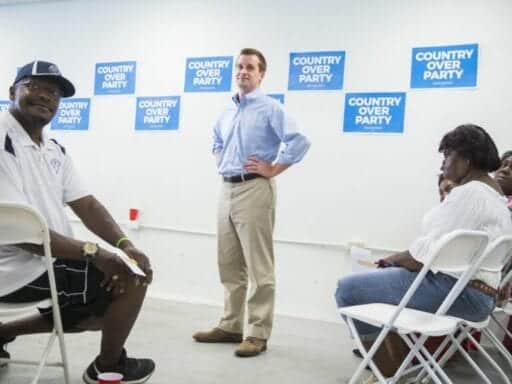 Democrats are getting another chance to flip a Republican-held seat in North Carolina.

The 2018 midterm elections aren’t yet behind us.

There will be a special election to fill North Carolina’s Ninth Congressional District seat on Tuesday after a ballot fraud scandal led the state elections board earlier this year to invalidate the 2018 results and overturn what had appeared to be a Republican victory.

In terms of overall control of Congress, not a whole lot is at stake. But the scandal that prompted this special election has attracted national attention, with an apparent victory overturned after officials looked into an embarrassing scheme involving a local operative hired by the GOP’s 2018 campaign and the falsifying of absentee ballots was laid bare at a dramatic public hearing.

Ultimately, this election is about just one congressional seat in a House. But for the narrative, it’s got much bigger implications. Democratic candidate Dan McCready — a former Marine who narrowly fell short in November 2018 — could grow the House Democratic majority by one seat and show that Republicans should be very worried about even safe seats next year. But Republicans are trying to hang on with a new candidate, Dan Bishop, a state senator who sponsored the state’s notorious “bathroom bill.” Bishop is trying to save face for the Republicans, and give them some optimism going into the 2020 election.

By all the fundamentals, Bishop should be the favorite in a district that is significantly more Republican than the United States as a whole, thanks in part to North Carolina’s aggressive partisan gerrymandering (recently overturned by a state court panel). But the stain left on the GOP by the fraud scandal could give McCready an opening.

Aside from settling a drawn-out electoral drama, Tuesday’s special election will also be a test of how much the suburbs are really souring on President Trump. As Catawba College professor Mike Bitzer noted in his preview of the election, the Ninth historically was solid suburban Republican ground.

But McCready came within 1,000 votes of winning in November. The Ninth was typical of the suburban districts that Democrats flipped (or nearly flipped) to take the House. They will need those voters again in the 2020 presidential election. Tuesday’s special election should give us some idea how those voters are feeling right now — and how much the stench from one of the most bizarre election scandals in recent memory has stuck to Republicans.

Why there is a special election in North Carolina, briefly explained

In February, the state election board, after hearing four days of evidence indicating fraud and an attempt to conceal the scheme from state investigators, voted to order a new election. Republican candidate Mark Harris, who the board never officially certified as winner, quickly announced he would not run again.

The reason was an elaborate absentee ballot scheme. Leslie McCrae Dowless, the local political operative contracted by Harris’s campaign whose activities were at the center of the investigation, was indicted on three counts of obstruction of justice, two counts of conspiracy to commit obstruction of justice, and two counts of possessing an absentee ballot in violation of state law, according to the Wake County prosecutor’s office.

During the hearing, state investigators established their theory of the case — that Dowless directed a coordinated scheme to unlawfully collect, falsely witness, and otherwise tamper with absentee ballots — and workers who said they had assisted him in the scheme delivered damning testimony. The hearing’s first day ended with Dowless, under the advice of his attorney, refusing to testify before the election board.

In the following days, a top political consultant for Harris’s campaign and the candidate’s own son gave remarkable testimony of their own about the decision to hire Dowless. The consultant, Andy Yates, and John Harris both insisted Harris did not know what Dowless was doing and proved too trusting about the operative’s claims. Yet John Harris did say he warned his father that Dowless’s prior work on absentee ballots seemed like it could be illegal, a warning that went unheeded by the candidate. As his son closed his testimony with a few kind remarks about his parents, Mark Harris was in tears.

The proceedings lasted four days, with Harris taking the stand on the final day.

But before he did, the board revealed that Harris’s campaign had produced new evidence the night before Harris was to testify: previously undisclosed contacts between the candidate and Dowless. Harris’s attorneys said they had misunderstood the extent of the investigation’s request. Democratic attorney Marc Elias referred to the documents as “explosively important.” He asked the court to consider the way in which the evidence was released as “adverse interference” by the Harris team.

Harris then spent most of the final day being grilled about his relationship with Dowless, before he made the stunning admission that the evidence demanded a new election be held. He had been the apparent winner on Election Night over Democrat Dan McCready, by less than 1,000 votes.

The election board — made up of three Democrats and two Republicans — had finally reconvened after Democratic Gov. Roy Cooper named new members amid an unrelated legal dispute. They reviewed the evidence in the case over two days and then voted to call for a new election at the hearing’s conclusion.

Under state law, the board was able to call a new election if the basic fairness of the election was tainted. It didn’t matter whether the number of votes in dispute would have been enough to swing the outcome.

What we learned about the alleged ballot tampering at the hearing

It’s important to remember two things about absentee ballots in North Carolina: Anybody can request one, and at the end of every day before the election, state officials publish a file of which voters requested an absentee ballot by mail and whether they have returned it to be counted.

A campaign could check that file every morning to know how many registered Republican, Democratic, and unaffiliated voters had requested and returned a mail-in ballot.

“From a mechanics point of view, this is a gold mine of information for candidates and their campaign,” Bitzer told me previously.

Indeed, some of the workers who testified before the board during the hearing described Dowless discussing with other operatives how the state of the absentee ballot count. Harris even allegedly asked Dowless at one point about his apparent confidence in the state of play in the election.

Investigators working on behalf of the North Carolina election board started the hearing by laying out the contours of the ballot tampering scheme, which they say was led by Dowless, and then questioned Lisa Britt and several other women who worked for him.

Britt, who was Dowless’s stepdaughter for a time and said she remained close to him, said she believed that she and Dowless had done something wrong. But she insisted more than once that the GOP candidate, Harris, had not been privy to the plot.

Between the opening statement from investigators, Britt’s testimony and corroborating testimony from other witnesses, here is what we learned about the alleged ballot tampering scheme:

Collecting an absentee ballot for another person and falsely witnessing a ballot — two of the allegations made in the witnesses’ testimony — are violations of state law, according to state investigators.

Britt, Andy Yates and John Harris have been emphatic that Harris was not aware of the plan. Investigators and Democratic lawyers still grilled Yates about his failure to identify Dowless’s prior criminal history while he was working for Yates’s firm on Harris’s campaign. John Harris also told the board that he had warned his father that Dowless might have conducted illegal electioneering in previous elections — but his father hired Dowless anyway.

State investigators also said they had not been able to conclude whether early voting numbers were improperly shared with third parties, one of the other allegations that had been made in the sworn affidavits that jump-started the fraud scandal.

Will Trump be impeached and removed from office, or face the 25th Amendment?
Disney+ is up to 26.5 million subscribers
How to watch Trump and Biden’s dueling town halls on Thursday
“You have stolen my dreams”: Greta Thunberg rages at world leaders at UN climate summit
This week in TikTok: And the song of summer is ...
How “forever chemicals” polluted America’s water