The species the world lost this decade 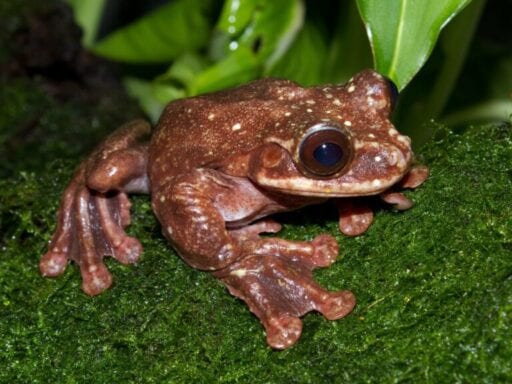 This decade has made it clear: Humans are killing Earth’s great biodiversity.

The Rabbs’ fringe-limbed treefrog was unlike any other species on planet Earth. Inhabiting only the forests of Panama, the frog had enormously charismatic brown eyes, and feet so oversized they looked cartoonish. But what made the frog truly special was the way it looked after its tadpoles.

The Rabbs’ was the only known frog in the world where tadpoles would eat the literal flesh of their fathers’ back to survive their early days of life. That’s right: Dads could feed their offspring with their own flesh.

You can think of it as a clever invention, wrought by evolution. Nature is filled with these quirks of survival, which can take hundreds of thousands, if not millions of years, to evolve.

But in 2016, the very last known Rabbs’ tree frog died in an Atlanta Zoo. And with the death of the last one — a male, nicknamed Toughie — all the biological machinery that came with the frog was wiped off the face of the earth.

The loss of this tree frog was one tiny chapter in one of the most important environmental stories of the decade: The great biodiversity of Earth is diminishing so fast that we are now in an extinction crisis.

In the past decade, 467 species have been declared extinct (though they might have gone extinct in decades prior), according to the global authority on species conservation status, the International Union for Conservation of Nature, or IUCN. Others have been brought to the brink and still more are seeing serious declines in their population numbers.

At the same time, scientists gained “a much better idea of how many species we’re losing, where we are losing them, and we have a better idea of how well we’re protecting them,” says Stuart Pimm, a professor of conservation ecology at Duke.

A few years ago, a team of researchers in Europe wanted to figure out the answer to a simple question: How long would it take for evolution to replace the 300 mammal species that have gone extinct in the time humans have walked the earth? Their answer: 3 to 7 million years. We have already caused damage that may last longer than us. And that’s just the mammals.

In all, the UN’s Intergovernmental Science-Policy Platform on Biodiversity and Ecosystem Services estimates many as 1 million species are now at risk of extinction if we don’t act to save them; that number includes 40 percent of all amphibian species, 33 percent of corals, and around 10 percent of insects.

But it’s not all depressing. We can still act. We know the causes of the crisis. And we know solutions that can work: namely, conservation.

“Every species on this planet had the right to be here,” Joseph Mendelson, the director of research at Zoo Atlanta, which housed Toughie, told me after his death, and with a great deal of sadness. “Our activities and our selfishness are taking them out.”

Some of the species we lost, or came close to, this decade: a dolphin on the brink, a rodent lost to climate change

The work to document the health of wildlife populations is often slow, and tedious, involving trips to some of the most remote places on the Earth.

The IUCN lists the Rabbs’ frog as “critically endangered, possibly extinct,” reflecting a slight hope there may be a few still hopping along in the wilderness of Panama.

Another species on the list of 467 gone extinct is the Bramble Cay melomys, which is believed to be the first mammal that has gone extinct due to climate change. This rodent lived in on an island off of Australia, and was last seen in 2009. It’s believed that rising seas contributed to the demise. The Bramble Cay, where the species lived, is just nine feet above sea level. Sea level rise made inundation events on the small isle more common, which killed plants, which deprived the melomys of shelter.

And here is a Hawaiian tree snail called achatinella apexfulva, the last individual of which died in January 2019 in captivity. It was 14 years old. (I didn’t know snails could get so old either.) “There were once dozens of species of tree snail on Oahu, nearly all of which had very beautiful and in some cases ornate shells,” Noah Greenwald, the endangered species director at the Center for Biological Diversity, says. “Many have gone extinct and nearly all have become very rare because of habitat destruction.”

“Oftentimes, it’s the little creatures that we’re losing,” he says, like the many species of mussels that used to inhabit the rivers of the Southeastern United States, each evolved to lure in a particular fish as its prey, or the insects of Puerto Rico’s rainforests.

Other species this past decade have been brought to the brink. This is the decade that the lower 48 states lost its last caribou, and that herds farther north in Canada have been shrinking by the millions.

In Africa, there are currently just two surviving northern white rhinos, and they’re living in captivity. They are both females, who are too old to reproduce. The last male died in 2018.

In the Gulf of California, the vaquita porpoise species has declined to a likely 12 individuals in the past decade. In 1997, there were around 600 of them. It’s unclear if the remaining vaquita will survive the next decade.

Species are likely going extinct before they have even been discovered

Based on analysis of the fossil record — the deep time capsule that tells the history of life on Earth — on average, species on the planet Earth become extinct at a rate of .1 per every million species, per year. So if there are 10 million species on planet Earth, you’d expect one species to go extinct every year. That is, before humans started to muck things up.

In a 2014 paper, Pimm and colleagues concluded that species are now going extinct at rates 1,000 times higher than that: There are now 100 probable extinctions per million species per year.

And what’s also tragic is that scientists haven’t even recorded all of the species of planet Earth. There are likely around 8 or 9 million species on Earth, and we’ve cataloged a bit more than a million.

That means species are likely going extinct before humans even discover them. The Rabbs’ frog was discovered in 2005, just 11 years before the last known one died. Under slightly different circumstances, we would have never known about its ability to feed its offsprings with its literal flesh.

The 5 root causes of the biodiversity crisis

The challenge for the 2020s

The biodiversity is related to, and linked, to climate change. But its consequences are different, and arguably, more permanent.

“The quality of our existence is directly intertwined with biodiversity,” Greenwald says. Many of our medicines are derived from plants. All of our food is derived from life, in one form of another. Ecosystems provide us with clean air and water. And when species disappear, ecosystems crumble. “It’s quite alarming that extinction is accelerating, and everyone should be alarmed,” he says.

And we can still work to preserve them. The question Pimm poses for the 2020s: “Do we want to tell our children and grandchildren that bears and lions and tigers, and all sort of other things are no longer with us because we pushed them to extinction?”

Pimms says part of the reason why species are more closely tracked today that they used to be is due to smartphone apps like eBird and iNaturalist, which you can use to help track and protect species where you live.

It’s also important to remember: Conservation works. Pimm and others have a goal of setting aside half the Earth’s land and seas solely for nature. It’s ambitious, especially in the face of setbacks, like the accelerating deforestation of the Amazon rainforest. But we know species can be saved, because it’s been done before.

In the US, the Endangered Species Act in the US is credited with helping the rebound of the bald eagle, the grizzly bear, and the humpback whale, to name a few. According to the US Fish and Wildlife Service, the act has prevented the “extinction of 99 percent of the species it protects.”

“We don’t want to give up hope,” Pimms says. “We need to protect more habitats around the world, we need to establish more national parks, and more protected areas.”

Tlaib promises to help preserve party unity after wading into a Clinton-Sanders row
Anxiety and depression are tracing a similar curve as Covid-19 cases
The legislative costs of campaigning without an agenda
Vox Sentences: Schultz stirs up a Venti-size debate
The White House has 2 testing standards: One for Trump and another for everyone else
How Mrs. Meyer’s took over the hand soap aisle