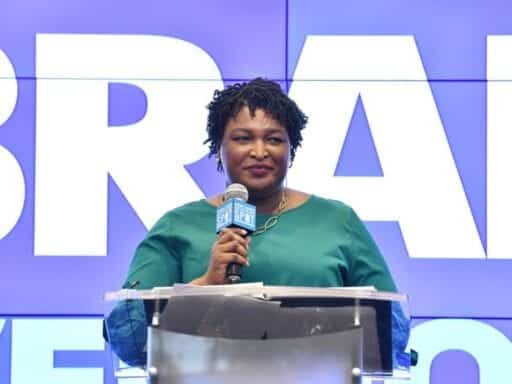 Abrams is defending her involvement in a 1992 protest against the then-Georgia state flag’s use of Confederate imagery.

On a rainy day in June 1992, a group of young activists affiliated with a group called Students for African American Empowerment stood on the steps of the Georgia state Capitol to share their disapproval of the state flag. The flag, at the time, was mostly comprised of the Confederate battle flag, with a smaller section dedicated to the state’s emblem.

As the demonstration crescendoed, a small group of protesters burned the flag, as other protesters watched. One of the people watching was Stacey Abrams, then a freshman at the historically black Spelman College, and now the Democratic candidate for governor of Georgia.

Abrams’s attendance at the protest was noted in a Monday report from the New York Times. Citing a report from the Atlanta Journal-Constitution, the Times reported that a state flag was burned at the event, although a photo of the flag burning shows that Abrams did not actually set a flag on fire. On Twitter, Daily Beast editor Goldie Taylor said that she was a leader of the 1992 march, adding that the flag burning was not planned and that Abrams did not directly participate in it.

She never burned any flag. She participated in a march along with hundreds of other students. The flag burning was never planned. It stunned organizers. I know, because I co-led that march on the Georgia capitol. https://t.co/U5iZMYdqyj

The 1992 protest was part of a decades-long fight against the old Georgia state flag’s incorporation of Confederate imagery. The version of the flag that Abrams protested was first introduced in 1956, as white Georgians pushed back against the Civil Rights Movement and the Brown v. Board of Education ruling. The state eventually removed the Confederate battle flag from the state flag in 2003, but only after a number of contentious political battles.

On Tuesday, Abrams defended her presence at the 1992 protest during her first debate against her Republican opponent Brian Kemp. “Twenty-six years ago as a college freshman, I along with many other Georgians — including the governor of Georgia [Democrat Zell Miller] — were deeply disturbed by the racial divisiveness that was embedded in the state flag with that Confederate symbol,” Abrams said.

“I took an action of peaceful protest,” she added. “I said that that was wrong. And 10 years later, my opponent, Brian Kemp, actually voted to remove that symbol.”

Kemp did not speak about the 1992 protest during the debate.

The Times report dropped two weeks before the Georgia election

As the New York Times report circulated this week, CNN and other outlets debated if the news of the 1992 event would hurt Abrams among voters. But that seems unlikely; even before the Times report, Abrams clearly stated her opposition to Confederate monuments, calling for the removal of a carving of Confederate leaders on Georgia’s Stone Mountain last year. Kemp has acknowledged that the monument was constructed to be a symbol of white supremacy, but says that removing the monument amounts to attempts to “rewrite history.”

This comes amid a societal debate about the place of Confederate memorials. Supporters of the monuments argue that their removal would amount to an effort to “change history,” regularly framing the Confederacy and the war it fought as being about states’ rights and Southern heritage — a “Lost Cause” framing of history has long ignored that the war was truly fought to preserve slavery. As the Washington Post recently noted, among some white Americans, the Confederate flag has become a symbol of patriotism, which, again, ignores its origins.

In light of this background, news of the 1992 protest could stir controversy among those supportive of the use of the Confederate flag. As the New Yorker’s Jelani Cobb wrote on Tuesday, the flag has played a role in ending previous political campaigns in Georgia.

But Georgia’s population has changed considerably over the years, with a massive influx of black residents since 2000, according to US Census figures. African Americans are now one-third of the state’s population, and Abrams’s campaign has focused heavily on mobilizing black voters and other voters of color ahead of the election. The state’s large black population has been repeatedly raised in conversations about voter suppression in the current contest. Indeed, as the story of Abrams’s presence at the 1992 protest circulated, Rolling Stone reported on leaked audio of Kemp complaining about Abrams’s voter turnout efforts.

As Cobb notes, belief that the 1992 flag burning could be a shocking revelation in Georgia in 2018 might be misplaced. The timing of the news “suggests that it was meant to galvanize certain sectors of Georgia’s white Republican voters,” Cobb wrote. But in a race where the contest is expected to hinge on black voter turnout, “the oddity lies in the implication that Abrams’s actions betray a disqualifying aspect of her character.”

Hey, older TV fans: networks just might start caring about you again!
How Netflix is winning more with less content
Here are all the 2019 Oscar winners
The fight for Trump’s tax returns just escalated
Republican and Democratic lawmakers are distancing themselves from Trump’s foreign policy
Trump faces a new allegation of sexually assaulting a woman at Mar-a-Lago