The state of the 2020 Democratic presidential race 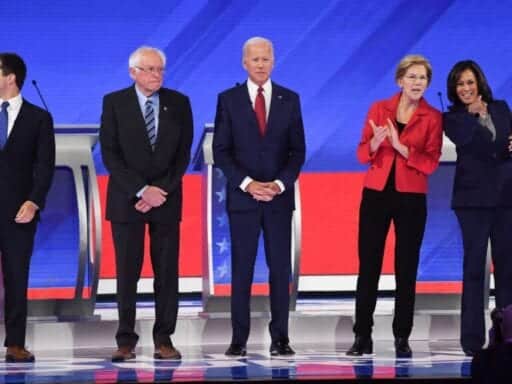 The horse race, broken down

As Democrats escalate their calls for President Donald Trump’s impeachment, the race to oust the president at the ballot box is tightening.

Sen. Elizabeth Warren inched ever so slightly ahead of former Vice President Joe Biden in the Real Clear Politics polling average this week to take the lead in the field of 2020 Democratic contenders, but she is far from a sure thing to win her party’s nomination. Neither is Biden, despite often being named the Democratic frontrunner.

The past few weeks have been active, with Warren rising in the polls, Biden finding himself at the center of Trump’s dealings with Ukraine, and Sen. Bernie Sanders, who hasn’t shaken a third-place standing in national polls, telling reporters he’ll have to initially level back his campaign appearances after suffering a heart attack.

Hanging over all that is an impeachment inquiry into President Donald Trump, one that involves Biden, who is having to tell rooms filled with donors that the Ukraine scandal shouldn’t keep them from opening their pocketbooks.

The horse race is raging on — and it’s doing so with some serious tumult. What that tumult means (if anything) is not clear. Experts and pollsters all say the same thing: It’s still too early. The state of the race is fluid, most voters remain undecided, and they probably will remain that way until pretty close to election day.

The current state of the race, briefly explained

Still months from the February Iowa caucuses, when the first Americans will be able to vote for one of the Democratic candidates, the Democratic presidential primary remains a three-way race between a veteran of mainstream Democratic politics in Biden and Congress’s two most progressive firebrands in Warren and Sanders. The three remain far ahead of the rest of the field, though Warren is growing her lead against Sanders in national polls.

But there are still 20 Democrats in the race, a dozen of whom will be on the October debate stage. South Bend Mayor Pete Buttigieg is still registering double-digits in some state polls, inching closer to Sanders in New Hampshire and Iowa. Sanders remains strong in California and Nevada where he’s in a statistical tie for first.

Yet, there isn’t a clear narrative even among the top three. Fundraising totals from the third quarter put Sanders in the lead, while Biden’s numbers are closer to entrepreneur Andrew Yang’s than to Warren’s or Sanders’s. Campaigns are still building out their ground games in crucial early states, where their coalitions are overlapping.

All of this puts the race in a state of flux, and although national and local polls put Warren, Sanders, and Biden at the top of the field, many of the same polls suggest voters have not yet solidly gotten behind a single candidate.

“We have basically have had a tied race going back several months now,” Andy Smith, a pollster with the University of New Hampshire told Vox. “People make up their minds at the very end.”

Smith suggested looking at New Hampshire, the first primary state where voters are being inundated with visits from presidential candidates as an example.

“People won’t really pay attention to the race until after New Years and they won’t decide who they are going to vote for until two days before,” Smith said. “And that’s a state where actually campaigns are going on.”

Warren’s stock has been steadily rising since she jumped into the race, while her biggest challengers — Biden and Sanders — have been dipping or stagnant, respectively. This narrative had a symbolic peak this week, when the latest Quinnipiac poll put her polling average ahead of Biden’s, by 0.2 percent. Warren held a 3 percentage point lead ahead of Biden in that early October poll, with 29 percent of the support.

That said, in most state polls all three top candidates remain within the margin of error of each other, Smith pointed out, noting that a lot of polling this early on still comes down to name recognition.

It’s about who is getting a lot of coverage (Warren) and who is getting positive coverage (Warren), Smith said. That’s not to say the polls don’t matter; simply that they still feed into a cycle: Better poll numbers mean more coverage, which means more money, more coverage, and better poll numbers. Warren’s ascendence is even shown through voters’ second choice; a recent Morning Consult poll conducted between September 30 and October 6, 2019, found Warren slightly edged out Sanders as the second choice for Biden supporters and dominated support as the second-choice pick for Buttigieg and Sen. Kamala Harris supporters.

Underlying the top-line numbers are trends that tell us more about each candidate’s coalition. Biden wins overwhelmingly with voters over the age of 65, and with African American voters. Warren has won over white liberal college graduates, though she is making bigger inroads with minority voters. And Sanders is holding on to his working-class base and picks up nearly half of the youngest voters, who despite being known for lower voter turnout, have been increasingly mobilized in recent elections.

Sanders beat out the whole Democratic field in terms of fundraising, raising $25.3 million in the last three months with more than 1 million donors — more money and donors than anyone else in the field. Warren raked in a close $24.6 million. Both Sanders and Warren are forgoing high-dollar fundraisers; meanwhile Biden, who has spent a lot of time courting high-dollar donors on the campaign trail, raised $10 million less in the third quarter. The days of big high-dollar fundraisers are looking increasingly passé.

That said each candidate has clear vulnerabilities. In an election where most Americans care most about electability, Biden and Sanders fair better (although only slightly) matched up against Trump. Sanders has been off the campaign trail for more than a week, after having a heart attack in Las Vegas in early October. And he has been forced to answer for his health.

Biden has been at the center of a White House scandal — one that is driving a House push toward impeachment — about Trump’s conduct with Ukraine. There is no evidence of misconduct on Biden’s part, but his handling of Trump lobbing allegations of wrongdoing against him has some concerned about how well he would counter presidential attacks during the general election.

Sanders is expected to be back on the campaign trail in the coming days, after spending time at his home in Burlington, Vermont. Sanders, his family, and campaign have had a difficult week of unforeseen events; the senator’s daughter-in-law died from a rare cancer Saturday just days after receiving a diagnosis and a week after Sanders had to undergo an emergency heart procedure.

Sanders suffered a heart attack while on a campaign swing through Nevada, a crucial early state where recent polls have shown him tied for first place with Biden. His campaign canceled events and appearances including a presidential forum on gun safety; a town hall on his plans to erase medical debt, pass single-payer Medicare-for-all health care, and expand Social Security.

The 78-year-old senator has been on a relentless campaign schedule — one that has come to define his political style. Sanders is known to hold upward of four events a day in early primary states. He told reporters he will initially have to scale back that schedule, but he clarified in an interview with NBC that he intends to build back up to that pace.

His campaign is running a $1.3 million television buy in Iowa, a state his campaign aides and surrogates see as a “must-win” and has built a significant chest of small-dollar donations.

Can Biden ward off a progressive challenge?

Biden’s coalition of older voters and black voters is a strong one in the early states.

In 2016, voters 50 years and older made up 58 percent of Democratic caucus-goers in Iowa; 28 percent were 65 and older. And in South Carolina, more than 60 percent of the Democratic electorate is black.

Biden’s numbers may look like he’s fading in national polls, but this coalition makes Democratic strategists and pollsters skeptical of that narrative.

But that’s where the all-important caveat comes into play: it’s still early.

It’s important to note that turn out in the Iowa caucuses is immensely low. In 2016, only 171,109 Iowans participated in the Democratic caucuses — a roughly 16 percent voter turnout. In such a crowded race, it’s possible the winning candidate in Iowa won’t actually need to turn out that many people.

What this means is that, again, things remain in motion: Biden seems to have sewn up the black vote in South Carolina, which is less fluid than voters in other states, but there is nothing to stop Warren or Sanders, or anyone else with some momentum behind them from pulling off a move similar to Obama’s.

“If you look at Iowa, which is 97 percent white, and new Hampshire, that’s more fluid,” Huffmon said. “The black vote is much harder to dislodge with a new voice. It’s about trust. who they feel comfortable with. … Warren is doing her darnedest to reach out to African American women — if that message starts catching then she can start moving.”

How Pacific Islanders have been left to fend for themselves in the pandemic
Trump’s Justice Department has a powerful tool to fight police abuse. It refuses to use it.
The decade, in 6 minutes
Parasite’s success is forcing a reckoning in Japan’s film industry
Americans are using the #TwitterFoodBank hashtag to help each other buy groceries amid the recession
Can children spread the coronavirus? It’s complicated.