The state of the 2020 Democratic primary polls, explained 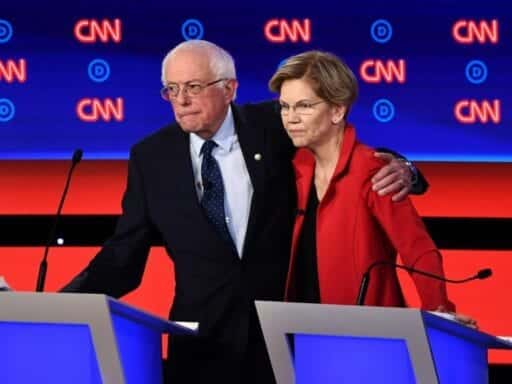 There are three candidates at the top.

Every recent national poll of the Democratic race agrees that the top three candidates are Joe Biden, Elizabeth Warren, and Bernie Sanders, in some order. And most of these polls have continued to show the former vice president in first place with a healthy lead.

But a new national poll from Monmouth University raised eyebrows Monday because it showed a tie between Sens. Warren and Sanders for first, with Biden just 1 point behind them. (That’s effectively a three-way tie, considering the poll’s margin of error.)

Most national polls this month have continued to show Biden ahead by double digits, and a CNN poll conducted some of the same days as Monmouth’s showed Biden up by 11. Biden leads by 10.5 in the RealClearPolitics poll average. So the Monmouth result is currently an outlier.

Still, it’s been over four months since any national poll tracked by RCP showed anyone other than Biden in first place, so this result is certainly worth noting. And it’s not just this one poll showing a close contest. A recent survey from the Economist and YouGov showed a tight three-way race at the top: Biden with 22 percent, Sanders with 19 percent, and Warren with 18 percent.

It’s too early to declare that Biden is collapsing or in serious trouble. But the takeaway from all these recent polls is that Biden, Sanders, and Warren are now the top three contenders — and that Sen. Kamala Harris, who briefly surged after the first debate in June, has fallen into a lower tier.

Monmouth’s result is interesting, but we should wait for more polls before concluding the race has dramatically changed

All year, the top line of Democratic primary polls has been quite consistent: Biden is winning. Poll after poll has shown him in first place.

So many politicos and pundits have been looking closely for signs of a Biden poll collapse. While Biden did lose some support (about 5 points in RCP’s average) after his tense exchange with Harris on busing during the first debate, he regained basically all of it before the second debate.

Now, though, there’s this new Monmouth poll’s surprising result, with Sanders and Warren both at 20 percent and Biden at 19 percent.

Biden pollster Joe Anzalone tried to dismiss the Monmouth poll, and called attention to its relatively small sample — it’s based on responses from 298 Democratic or Democratic-leaning registered voters. That is indeed on the smaller side compared to recent Democratic sample sizes from CNN (402), Fox News (483), and Quinnipiac (807). In fact, if you scroll through FiveThirtyEight’s tally of sample sizes, Monmouth’s is the smallest of any recent polls.

Still, a bigger sample size does not necessarily make for a more credible poll; the sampling and weighting processes are also quite important. And Monmouth is also a well-regarded polling organization with an A+ rating from FiveThirtyEight.

We shouldn’t jump to conclusions from the Monmouth result, but we shouldn’t entirely dismiss it either. It’s generally a bad idea to automatically “believe” any one new poll showing a sudden change. It may be the first to show a significant underlying change, but it also may be a temporary blip or an outlier. So the best practice is to keep it in mind as one interesting new data point and to wait to see if other new polls back up its findings.

What does seem clear is that the top three are Biden, Sanders, and Warren

That is to say: not Kamala Harris, not South Bend, Indiana, Mayor Pete Buttigieg, and not anyone else in the enormous field.

For a few weeks after the first debate in June, it had seemed that there was a top tier of four candidates, with Harris joining the other three. From that debate alone, she doubled her support from about 7.5 percent beforehand to about 15 percent afterward (per RCP’s average).

But since mid-July, Harris’s trajectory has not been good: She’s lost all the support she’d gained and is now right back at 7.5 percent.

This is in stark contrast to Warren. At the beginning of the year, Warren polled in a distant fourth or even fifth place. But since May, she’s had a steady rise that has put her in a near-tie with long-standing second-place candidate Bernie Sanders.

As for Sanders himself — Warren’s rise spurred a round of punditry asserting that Sanders was done for. But the latest results show he very much remains a contender.

Finally, as always with national polling we should remember that there is of course no national primary, and that the results of the Iowa caucuses and New Hampshire primary will make major headlines and reshape the race before the vast majority of the country votes. There hasn’t been much polling of either state lately, but in general Biden had led both — though his leads there have been smaller than his national leads.

The pandemic job divide: Those who can stay safe at home, and those who can’t
Tulsi Gabbard just won a delegate. Will she be in the next debate?
Trump’s defense in the impeachment trial just concluded. Here are 6 key moments.
The controversy over Bret Stephens’s Jewish genius column, explained
New evidence suggests Trump’s border crackdown isn’t just cruel — it’s likely ineffective
The political consequences of hiding abuse