The state of the 2020 Democratic primary 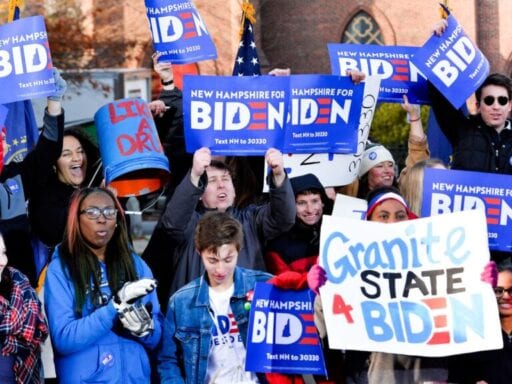 Democratic voters aren’t sure who they want to be the nominee — just that they want someone who can beat Trump.

With fewer than 75 days until the Iowa caucuses, the Democratic presidential primary is very much in flux.

In case anyone thought that was no longer true, and that the group of frontrunners — which was first limited to former Vice President Joe Biden and Sen. Bernie Sanders, then grew slowly over the summer to include Sen. Elizabeth Warren — was now set, think again.

That group has expanded to include South Bend, Indiana, Mayor Pete Buttigieg — at least in an early state or two. He has risen to the top of recent Iowa polls and is also doing increasingly well in New Hampshire.

Of course, it’s difficult to tell at this stage who is actually leading the race, and it is still far too early to predict who will become the nominee. Not least because people are still jumping into the race, or at least flirting with the idea.

But there are a couple trends shaping the race.

In other early states like South Carolina and Nevada, Biden maintains a sizable lead, with Warren trailing in second. Nationally, polling shows a close three-way race between the former vice president and his two main progressive rivals, Warren and Sanders.

But there seems to be a lingering uncertainty about the field of candidates broadly, and Biden specifically — if Buttigieg’s rise, and the late entrances of former Massachusetts Gov. Deval Patrick and possibly New York City Mayor Michael Bloomberg, are any sign.

Amid this uncertainty, each candidate has worked to build their coalitions by leaning into their established brands.

Warren — who had a brief stint as the race’s Iowa and national frontrunner — has responded to increasing attacks from her rivals with policy proposals, releasing a detailed plan to pay for and pass her vision of Medicare-for-all. She’s also seemingly delighted in her increasingly antagonistic relationship with America’s ultra-wealthy, highlighting the work she’d do to rein in Wall Street. Sanders, who paused his campaign for a time following a heart attack, has redoubled his efforts to spread a message of an inclusive revolution, winning high profile endorsements in the process.

Currently, which candidate is in the lead depends on where you look, on demographics, and on how certain each candidate’s current supporters are that they will vote and caucus for them. Spoiler: most say they could change their minds.

Biden remains the candidate to beat

Biden became the race’s frontrunner before he even entered the race — ahead of his official announcement in May, his national polling average was 41 percent. His polling is no longer quite as strong but he remains the frontrunner nationally, with a polling average of around 27 percent.

However, this lead has not insulated him from challenges by those hoping to replace him as the main alternative to the race’s progressive frontrunners, Warren and Sanders. Patrick has said he wants to be the candidate for the “woke,” while “leaving room for the still waking.” And Bloomberg has signaled his campaign would center around a more moderate message as well.

Voters in two early states seem to be responding well to Buttigieg’s pitch, particularly in Iowa, where a November Des Moines Register/CNN poll found that Buttigieg has 25 percent support in the state, trailed by Warren with 16 percent, and Sanders and Biden with 15 each. Respondents in that poll said they favored Buttigieg because he was neither too liberal or conservative — 63 percent said he was ideologically just right.

A November Monmouth University poll turned out similar results, with Buttigieg leading the field with 22 percent support in the state, albeit with a much narrower lead. He doesn’t fare as well in New Hampshire — where recent polling suggests an open race with Warren, Sanders, and Biden each topping one recent poll — but he is nevertheless only a few percentage points behind. (There was one recent New Hampshire poll where Buttigieg had a 10-point lead, but it faced some methodological questions).

While Buttigieg is making a strong case for himself in Iowa and New Hampshire, what casts doubt on Buttigieg assuming the race’s more centrist mantle are the states that come directly after, where polls mirror national ones more closely.

Those states — South Carolina and Nevada — have more diverse populations, and Biden leads among voters of color in both places by a significant margin. For instance, a November Quinnipiac University South Carolina poll found Biden’s support among black voters to be at 44 percent. Buttigieg’s support was about zero.

And the latter’s attempts to win over black voters — a key Democratic constituency — have been mostly marred by controversy, including questions about his handling of a South Bend officer killing a black man, concerns his campaign may have leaked polling suggesting his poor black support is due to homophobia, and complaints from black leaders that he misrepresented their level of support for him.

All this means that Biden does not necessarily need to be alarmed by Buttigieg’s rise in Iowa, Iowa Ipsos vice president and polling expert Clifford Young told Vox, and that — at least for now — it is difficult to predict how a Buttigieg win in that state (which remains, despite his polling there, one possible outcome of many) would affect races in New Hampshire or South Carolina. It also provides an opening for a candidate of similar ideology who is more readily able to build a diverse coalition.

“Buttigieg performs better than anyone, and that suggests he has pretty good potential,” Young said. “It doesn’t mean he’s going to realize it, but he does.”

Sanders is not having the same sort of moment. His support nationally has been incredibly consistent for months. Since May, his polling average has vacillated between 14 and 18 percent, and his support in early states has been relatively steady as well, ranging from the mid-teens to the low 20s. Morning Consult’s early state polling average puts him at 20 percent.

Iowa pollster J. Ann Selzer told the Des Moines Register a large part of this consistency has to do with how engaged Sanders’s backers are. In Iowa, 51 percent of these voters said they were “extremely enthusiastic” about the senator’s candidacy; the next closest candidate in terms of enthusiasm was Warren, of whom 35 percent of her backers said they are extremely enthusiastic.

“The part that is impressive is the enthusiasm that his supporters have. He might not be growing his base, but they’re stuck with him — in the good way,” Selzer said. “It feels like they will not budge.”

Young told Vox a large part of this is due to the fact voters are very familiar with Sanders following his 2016 presidential run, and cautioned having such a well defined base of support can limit one’s ability to win over new supporters, particularly in a crowded field.

“He’s in some ways, tapped out in terms of his potential,” Young said. “Someone like Buttigieg or [Sen. Kamala] Harris … those are example of candidates that have much more potential, much more upside. Someone like Sanders, he can only lose ground — Biden as well.”

Young said there’s one clear way for Sanders (and Biden) to win new fans: “It’s going to be more through differentiation that they’re going to improve their lead or keep their position than name recognition.”

In recent weeks, Sanders has stood out for his winning of high-profile endorsements. Following a campaign break due to a heart attack, Sanders received the backing of the House of Representatives’ most visible progressives: Reps. Alexandria Ocasio-Cortez, Ilhan Omar, and Rashida Tlaib. He’s also won cosigns from a number of musicians, including TI and Jack White.

Having these powerful and notable surrogates has not seemed to affect Sanders’s polling. But he remains consistently competitive, and is a fundraising powerhouse, recently announcing his campaign has received 4 million individual donations. At the end of the third quarter, he had the largest fundraising haul — $25.3 million — and with the most cash on hand: $33.7 million. He has the money to stay in the race until the very end, and to pay for a lot more ads in the weeks ahead of the first contests.

With just months to go, few really know who they want to vote for

Despite the best efforts of the four frontrunners, it is not clear they have actually won voters over in any lasting way. Support for each is soft, particularly in Iowa, New Hampshire, and South Carolina.

In Iowa, for instance, 62 percent of respondents told the Register they may change their minds before the caucuses. In New Hampshire, a state whose voters pride themselves on weighing options until Election Day, Quinnipiac found that number to be 61 percent, and perhaps worryingly for Warren and Buttigieg, the majority of their supporters responded they weren’t sure they’d end up voting for them — 70 and 73 percent, respectively.

And perhaps this is why, despite voters on the state and national levels all telling pollsters they have plenty of choices and don’t want any more, Patrick announced recently he is entering the race and Bloomberg has hinted he might do the same.

The only thing voters have made clear beyond that they are largely satisfied with the number of current choices, is that what they want most in a nominee is someone who can defeat President Donald Trump.

A November Fox News poll of Nevada voters found 74 percent said beating Trump is the most important thing in a candidate; 63 percent of Iowans told the Register having a nominee capable of defeating Trump is more important than having one with policies they support. A national November Economist/YouGov poll found 65 percent of respondents saying it’s more important to have a nominee who can beat Trump than one who aligns with their personal policy positions.

Again, there is no consensus on who that person is, and each candidate has made the case for their own electability many times over. It won’t be clear who Democrats think stands the best chance until next year, and we’re still a year away from knowing whether those primary voters will be correct.