The stunning hypocrisy of Bill Barr 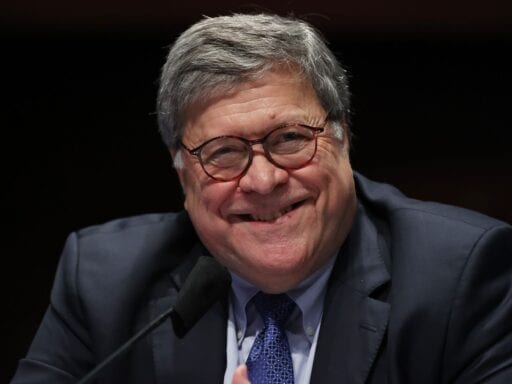 Share
Loading...
US Attorney General William Barr testifies before the House Judiciary Committee in the Congressional Auditorium at the US Capitol Visitors Center July 28, 2020, in Washington, DC. | Chip Somodevilla/Getty Images

On Wednesday night, Attorney General Bill Barr gave a speech bemoaning the criminalization of politics, and criticizing some of his own Justice Department prosecutors for using “novel” legal arguments to charge people they disliked for political reasons.

Yet just hours before, news broke that Barr had asked Justice Department prosecutors to explore charging rioters with the rarely invoked crime of sedition — and that he’d even asked officials to explore whether they could criminally charge the Democratic mayor of Seattle for failing to quickly crack down on an “autonomous zone” protesters established there earlier this summer.

That may seem like obvious hypocrisy. But Barr’s speech wasn’t really an attempt to establish larger principles for how the Department should be run — it was an attempt to defend his own controversial actions in cases involving friends of President Donald Trump.

Speaking at a Constitution Day celebration for the conservative Hillsdale College, Barr crafted a narrative in which the Justice Department was filled with zealous prosecutors tempted to use dubious legal theories who badly needed “supervision” — by him.

The power of federal prosecutors, Barr said, “carries inherent potential for abuse or misuse,” and “left unchecked, it has the potential to inflict far more harm than it prevents.”

This may make Barr sound like a criminal justice reformer. But he is nothing of the kind. He’s a conservative “tough on crime” Republican who supports aggressive prosecutorial tactics. In this very speech, he took a passing shot at “highly political” district attorneys trying “to remake state and local prosecutorial offices in their preferred progressive image.”

A close reading of Barr’s words makes clear that the speech was a barely coded critique of several Justice Department investigations and prosecutions of President Trump and his allies over the past few years.

What Barr said in his Hillsdale speech

The background here is that, before he was attorney general, Barr wrote a lengthy memo criticizing special counsel Robert Mueller’s investigation of President Trump for obstruction of justice. After he was sworn in, Barr declared that Mueller’s findings — which were deliberately inconclusive on whether Trump had obstructed justice — were “not sufficient to establish that the President committed an obstruction-of-justice offense.”

But, in two highly unusual moves in other cases involving Trump allies, Barr personally intervened to weaken the sentencing recommendation for Roger Stone, and he is seeking to throw out the false statements case to which Michael Flynn pleaded guilty. Barr has also fired or replaced key US attorneys in New York and the District of Columbia.

Barr’s speech Wednesday, then, was an attempt to argue that all of these actions on his part were not only defensible, but good and necessary. His criticisms of excessive prosecutions and the criminalization of politics did not specifically mention the Cohen, Stone, or Flynn cases — but if there was any doubt about what he was referring to, he removed it by ad-libbing a criticism of “Mueller’s office.”

Barr made three main arguments in the speech.

1) I am the boss: First, he rebutted criticism that he was interfering with the decisions of line prosecutors by arguing that “political supervision” in the Justice Department was core to its legitimacy.

“Name one successful organization where the lowest-level employees’ decisions are deemed sacrosanct,” Barr said. “There aren’t any. Letting the most junior members set the agenda might be a good philosophy for a Montessori preschool.”

He also stated: “The Attorney General, senior DOJ officials, and US Attorneys are indeed political. But they are political in a good and necessary sense.” And he added that the officials “are supervisors. Their job is to supervise. Anything less is an abdication.”

All true enough, in general. But the broader criticism of Barr isn’t just that he overrides lower-level prosecutors’ decisions — it’s that he does so selectively and inappropriately, in a way designed to help the president’s friends. For example, there is no known example of Barr intervening to change a sentencing recommendation for someone other than Roger Stone.

2) Prosecutors can get out of control: So having defended the theoretical legitimacy of his actions, Barr went on to try to explain a reason for them — that he’s intervening to rein in overzealous, out-of-control prosecutors.

Barr said that sometimes prosecutors can “become deeply invested in their case and assured of the rightness of their cause” — and then “lose perspective.”

“Individual prosecutors can sometimes become headhunters, consumed with taking down their target,” Barr said. “If you are confident early on that the target committed serious crimes, there is always a temptation to will a prosecution into existence even when the facts, the law, or the fair-handed administration of justice do not support bringing charges.”

All this is why, Barr said, “review by detached supervisors” can be so important. Again, all this is true about prosecutors in general but whether these criticisms really apply to investigations of Trump and his team that Barr has intervened in is a different question.

“The criminalization of politics is not healthy,” Barr said. “The political winners ritually prosecuting the political losers is not the stuff of a mature democracy.”

He continued: “Rather than root out true crimes — while leaving ethically dubious conduct to the voters — our prosecutors have all too often inserted themselves into the political process based on the flimsiest of legal theories.”

This was the most seemingly hypocritical part of the speech, given the reports that Barr had just recently asked officials to explore charging rioters with sedition and the mayor of Seattle with unspecified crimes.

“We cannot let our desire to prosecute ‘bad’ people turn us into the functional equivalent of the mad Emperor Caligula, who inscribed criminal laws in tiny script atop a tall pillar where nobody could see them,” Barr said. He clarified that he wasn’t talking about “the Al Capone situation, where you have someone who committed countless crimes and you decide to prosecute him for only the clearest violation that carries a sufficient penalty.” Instead, he said, he is “talking about taking vague statutory language and then applying it to a criminal target in a novel way that is, at a minimum, hardly the clear consequence of the statutory text.“

Barr also complained about “ad nauseam speculation by legal pundits — often former prosecutors themselves — that some action by the President, a senior official, or a member of Congress constitutes a federal felony under this or that vague federal criminal statute.”

Of course, President Trump himself has often gone the furthest in demanding dubious or groundless prosecutions of his political enemies — though so far, he hasn’t gotten any.

“Our prosecutors have all too often inserted themselves into the political process based on the flimsiest of legal theories,” Barr went on. Yet here too, there seems to be a useful exception — Barr is reportedly pressuring US Attorney John Durham to release interim findings in his review of potential misconduct related to the Trump/Russia investigation before this year’s election, and has said he sees no problem in that timing.

Overall, many of the principles Barr put forward are unobjectionable in general. Yes, prosecutors can go too far. Yes, the criminalization of politics is a worrying trend. But it’s awfully convenient that, rather than shaping his thinking about the criminal justice system in general, Barr is mainly using all this as a way to defend his own interventions to help President Trump and his associates.

These AI-generated coronavirus memes are better than human-generated ones
Ilhan Omar, a progressive Muslim woman, wins Minnesota primary for Keith Ellison’s House seat
The spring equinox is Thursday: 8 things to know about the first day of spring
Why all Americans should celebrate Juneteenth
This week in TikTok: How a dance goes viral
Vox Sentences: 17 fires this time