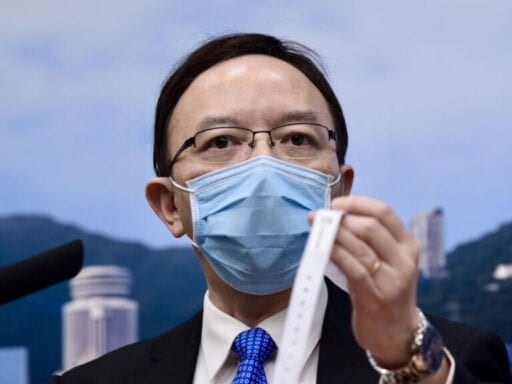 Other countries have had better results putting sick people into isolation instead of sending them home to potentially infect their family.

East Asian countries were way ahead of much of the West in adopting widespread mask-wearing as a means to reduce transmission of the coronavirus. And complaints about the Trump administration’s inability to ramp up testing to the kind of levels successfully used to curb a once-major outbreak in South Korea have been endemic for months.

But there’s something else Asian countries do to control the spread that seems almost unthinkable in the United States: centralized isolation of people who test positive for Covid-19 and their close contacts.

The implementation of these systems varies from country to country, according to local circumstances and preferences. But from China to Hong Kong to Taiwan to Korea, the broad outline is the same: You don’t tell sick people to go home where they can infect their families and roommates; you send them someplace set aside for the purpose. Since some of the people isolated end up being asymptomatic, it’s inconvenient to be forced outside of the home. But for the many people who do get sick, just not sick enough to require intensive care in a hospital setting, it’s convenient to have a safe and well-monitored place to recuperate.

Isolation is the less warm-and-fuzzy side of the “more testing and more contact tracing” mantra. But it does seem to work. Singapore, for example, had coronavirus well contained but didn’t practice centralized quarantining among its population of migrant workers — only to see their dorms become a major outbreak hot spot.

Many Americans instinctively resist this idea, or assert that other Americans would. But the fact is the US has already accepted drastic restrictions on activity to curb the pandemic, and centralized isolation measures might make it easier to shift to more freedom on other fronts. Meanwhile, the country is currently well-provisioned with vacant hotel rooms and college dorms that could be used for the purpose. And even if mandatory isolation turns out to be a bridge too far politically, a purely voluntary quarantine system could still do an incredible amount of good.

According to the Centers for Disease Control and Prevention (CDC) and other American public health institutions, the best thing to do if you get sick with Covid-19 and don’t require hospitalization is to try to isolate yourself at home to protect your family members or roommates.

“As much as possible, stay in a specific room and away from other people and pets in your home,” says the CDC. “Also, you should use a separate bathroom, if available.”

For many people, this simply isn’t possible in practice. The New York Times reporter Dana Goldstein described her experience of getting sick only to see her husband and young daughter also succumb to infection since there was no practical way to isolate inside their New York City apartment.

11. We lacked masks, surgical gloves and a second bathroom. My husband was taking on all childcare and could not also disinfect every item I touched. In a functioning system, medical supplies would be provided to affected families, or sick patients would be cared for elsewhere.

At the opposite end of the spectrum, my family owns a rowhouse in Washington, DC, that includes a basement apartment with a kitchen, washer-dryer, and separate entrance. We normally rent it out on Airbnb or use it as guest lodging when family or friends from out of town want to visit. None of that is possible during the pandemic, so right now it’s my home office. But I’ve also set it up as quarantine quarters, stocked with easily 14 days’ worth of nonperishable food and everything else I’d need in the event that I start showing symptoms.

But while this is nice for me, it’s an unrealistic at-home standard for the typical person, and it’s not even clear that isolating in the basement would work. Chris Cuomo ended up living out my hypothetical basement isolation plan when he was diagnosed with Covid-19, but his wife got sick anyway.

It’s not 100 percent clear how that happened, though after reading a preliminary study about how there’s some evidence the coronavirus could spread via air conditioning ducts, it’s possible centralized climate control systems could negate efforts to isolate at home.

Standard practice in developed Asian countries, by contrast, is to isolate the moderately — or often even just potentially — ill outside the home.

Hong Kong has more metro riders than New York in a city with a similar population size and significantly fewer miles of track. And while Hong Kong has a lower overall population density than New York City, that’s because nearly 40 percent of the territory is composed of designated country parks that are free of development. The built-up portion of Hong Kong is hyper-dense, and the average apartment is smaller than 500 square feet.

But despite these factors and very close economic linkages to China, Hong Kong contained the crisis — not just with tests but with centralized isolation.

Mike Bird, a Wall Street Journal financial markets correspondent based in Hong Kong, describes a very different situation from what Goldstein faced. Simply because a friend fell sick, Bird was placed in a spartan but comfortable isolation camp for a 14-day spell.

What real contact tracing looks like : A friend caught covid-19, so I was put in a HK quarantine camp for close contacts ’til it’d been 14 days since I’d seen them. Been out a little while now, never had symptoms of any sort. More natural light, faster wifi than my flat. pic.twitter.com/xAJwEH6MUe

Korea, which simply had too many cases to isolate this aggressively, needed to adopt a tiered system. Moderately ill people are sent to an isolation center, and only genuinely asymptomatic cases are told to stay home and self-quarantine there. But people ordered to stay home aren’t left on their own. The government sends “quarantine care packages” with groceries, masks, hand sanitizer, and instructions on how to safely dispose of potentially contaminated trash. The Koreans have also been experimenting with location-tracking bracelets to enforce self-quarantine orders.

At the other end of the spectrum, case volumes in Taiwan have been persistently low enough that hospitals are the centralized isolation facilities.

In mainland China, where the outbreak raged out of control after weeks of denial and cover-up from authorities, a wide suite of tough measures was eventually brought to bear to get things under control. A large team of researchers led by the University of Southampton looked at Chinese data and determined that of everything they did, “early detection and isolation of cases was estimated to prevent more infections than travel restrictions and contact reductions.”

This is what Americans are talking about when they emphasize the centrality of more testing to getting the country safely moving again. But the “isolation” part of the strategy is important. If you test people and keep them trapped inside with their families, you’re not accomplishing nearly as much as you would if you actually isolated them.

Are we sure this wouldn’t work in America?

A common reaction in the United States is that while this might work fine in Asian countries, there’s no way it would fly in America. As Ezra Klein writes, “the US is a very different country, with a more mistrustful, individualistic culture.”

That might be so. But it’s worth recalling that in 2017, hundreds of thousands of Koreans took to the streets in a sustained mass protest movement to get a corrupt president booted from office. The incredible protest movement that rocked Hong Kong throughout 2019 was less successful, but the courage and tenacity of those protesters showed pretty clearly that Asian authorities are not dealing with a sheep-like public or one that puts unquestioning trust in incumbent governments.

Mass publics have been willing to embrace quarantine measures in part because they make sense. The US government’s official stance is that it’s not safe for a sick person to have contact with her roommates, family, or even house pets; given that reality, it’s the failure to isolate that seems to require justification. It’s also more humane. Nobody wants to listen to a loved one suffer alone in the room next door without comfort or assistance. Even people who don’t require acute care benefit from some kind of attention and support, and that’s best provided by trained personnel in an organized setting.

Last but by no means least, stricter restrictions on the activities of those exposed allows for a less restrictive overall environment.

America’s current policy restricts healthy people’s ability to access outdoor space, generates paranoia about passing encounters with runners or cyclists, and discourages people from seeking routine health care for ailments that aren’t Covid-19. But actual sick people are sent home to potentially infect their loved ones. It’s not so much that the US is doing more than Asia to prioritize liberty over public health as that it’s ignoring evidence on which restrictions of liberty are effective.

Even if mandatory centralized quarantine does prove to be a bridge too far for the American political system, the striking thing about the status quo is there’s no good way for people to voluntarily isolate themselves from other members of the household.

If states and cities began to invest in quarantine facilities — like by buying out hotels, which are currently hurting for lack of customers — opening them up on a voluntary basis could do an enormous amount of good. But especially for jurisdictions with smaller caseloads that are eager to “open up,” it’s really worth thinking harder about what the plan is when new cases pop up.

Strict centralized isolation measures would likely ultimately be cheaper and less invasive than ping-ponging in and out of lockdown. It’s what the most successful coronavirus-fighting countries are doing. And since the US has already turned almost every aspect of daily life upside down, it should think about trying a similar strategy, too.