The Supreme Court considers a $12 billion plan to sabotage Obamacare 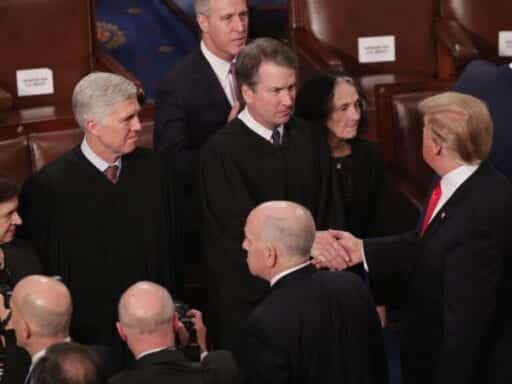 The Court will decide if the Trump administration must keep one of Obamacare’s promises.

In the past, when the Supreme Court’s heard a case involving the Affordable Care Act, the Court’s decision was the climax of a political circus that dominated front pages and cable news for months or even years. At least two past Obamacare cases were existential threats to the law itself.

A trio of consolidated cases the Supreme Court will hear on Tuesday are, well, not that. Whatever the Court decides in Maine Community Health Options v. United States, Moda Health Plan v. United States, and Land of Lincoln Mutual Health v. United States, the Affordable Care Act will still be here the next day.

And yet Maine Community and its companion cases are, by any objective measure, huge. They involve an interesting question about what Congress must do if it wants to repeal part of a law. There’s also about $12 billion at stake.

Beginning in 2013, Sen. Marco Rubio (R-FL) led an attack on an Obamacare program known as “risk corridors,” which promised to offset financial losses for insurers who lost money on plans sold on the law’s individual insurance exchanges. The Affordable Care Act itself does not specifically appropriate any money to pay for the risk corridors, and Republican leaders took up Rubio’s crusade during the 2014 budget negotiations. As a result, appropriations bills included a provision preventing the federal government from using certain funds to make the required payments.

The significance of this provision, known as a rider, is the central issue in Maine Community and the two related cases. A divided federal appeals court held that it implicitly repealed Obamacare’s risk corridors. Several insurance companies urge the Supreme Court to reverse that decision, arguing that the risk corridor payments may still be made from a separate pool of government funds.

And there’s a good chance that these insurers will prevail. Their legal argument is strong — strong enough that the Trump administration barely defends the lower court’s reasoning in its brief, and primarily focuses on a different argument that was rejected by the court below. The mere fact that the Supreme Court agreed to hear this case, moreover, is a positive sign for the insurers. If the Court simply wanted to stick it to Obamacare, the best outcome would be to let the lower court decision stand without Supreme Court review.

What are risk corridors?

Insurance operates on a fairly basic model. Consumers pool their money together in a “risk pool.” Then, if one of those consumers experiences an unfortunate event — for a health insurer, this event could be an illness or an injury — the insurer pays money out of the pool to cover the unfortunate consumer’s costs.

To make this business model work, insurance companies must strike a delicate balance. If they charge premiums that are too high, they will lose consumers to their competitors. If they charge premiums that are too low, however, the results can be catastrophic: the risk pool will be depleted before the insurer has paid out all the money it owes. In the worst case scenario, the company can collapse and the consumers could be left with nothing.

Experienced insurers can rely on a wealth of data to determine how much they are likely to owe, given the mix of people who participate in their risk pool, and set appropriate premiums. But a problem arises if an insurer enters an unfamiliar market, where they are unlikely to have enough data on their new consumers to know how to set premiums.

Which brings us back to risk corridors. The entire purpose of the Affordable Care Act was to provide health coverage to people without health insurance, some of whom had lacked it for a long time. But that meant that Obamacare was asking insurers to enter a market made up of a large number of unfamiliar consumers.

Selling plans on the Obamacare exchanges was a huge risk for health insurers, at least in the early years, because many of those insurers needed to spend some time in this new market before they had enough data to know where to set premiums.

Obamacare’s risk corridors were a temporary, three-year program that helped insurers manage this risk. For the first three years that the Affordable Care Act’s exchanges were open, the government agreed to pay insurers that set premiums too low a percentage of their losses. Insurers who set their premiums too high, meanwhile, had to pay the government a portion of their excess profits.

In any event, much of the money owed to insurers under Obamacare’s risk corridor program — more than $12 billion in total — was never paid to insurers because of the rider seeking to block those payments. So the insurers sued, claiming that they are owed the money regardless of congressional Republicans’ efforts to undercut them.

Can Congress repeal a law without stating clearly that they are repealing a law?

The Affordable Care Act’s language establishing its risk corridors is mandatory. The federal government “shall pay” a fraction of the costs of insurers that underestimated their premiums by a sufficient amount.

So the insurers’ argument is fairly simple. Despite the appropriations rider, the government is still legally obligated to make these payments. The Affordable Care Act says that the government “shall pay” this money. There’s no ambiguity in the word “shall.”

The Trump administration, for what it’s worth, spends the bulk of its brief arguing that these payments are “contingent on appropriations” but the lower courts were not convinced by this argument. Instead, the appeals court claimed that the appropriations rider implicitly repealed the Affordable Care Act’s mandatory language requiring the government to make the risk corridor payments.

But there’s a bevy of precedents, many of them older than the United States itself, establishing that courts typically should not conclude that one statute implicitly repeals another. As the Supreme Court explained more than two centuries ago, “repeal by implication ought not to be presumed unless … the inference be necessary and unavoidable.” Indeed, as the Supreme Court said in Tennessee Valley Authority v. Hill (1978), this presumption against repeal “applies with even greater force when the claimed repeal rests solely on an Appropriations Act.”

The Court returned to this theme most recently in Epic Systems v. Lewis (2018), where Justice Neil Gorsuch wrote for the Court that “a party seeking to suggest that two statutes cannot be harmonized, and that one displaces the other, bears the heavy burden of showing ‘a clearly expressed congressional intention’ that such a result should follow.”

Having laid out this strong presumption, it’s worth examining the text of the rider itself. That text provides that “none of the funds made available by this Act” from certain health care related appropriations “may be used for payments under section 1342(b)(1) of Public Law 111–148 (relating to risk corridors).” The key words here are “by this Act.”

The rider prohibits money appropriated under specific spending bills from being used to fund the risk corridors, but it does not prevent the government from making these payments from another source of funds.

And it turns out that another source of funds does exist. The federal government’s Judgment Fund “pays court judgments and compromise settlements of lawsuits against the government.” Thus, if the Supreme Court determined that the federal government is obligated to make risk corridor payments under the Affordable Care Act, those payments may be made out of the Judgment Fund without violating the appropriations rider.

If the history of litigation challenging the Affordable Care Act teaches us anything, it’s that no legal argument that seeks to undercut Obamacare can be completely dismissed. The legal history of Obamacare has been a series of lawsuits that were widely regarded as ridiculous, then taken very seriously by conservative judges. There’s no guarantee that the insurers will prevail in Maine Community.

Nevertheless, the insurers bring strong arguments to the table in these consolidated cases. And the justices’ mere decision to hear this case may be a sign that they intend to reverse the lower court.