The Supreme Court considers an important showdown over abortion this week 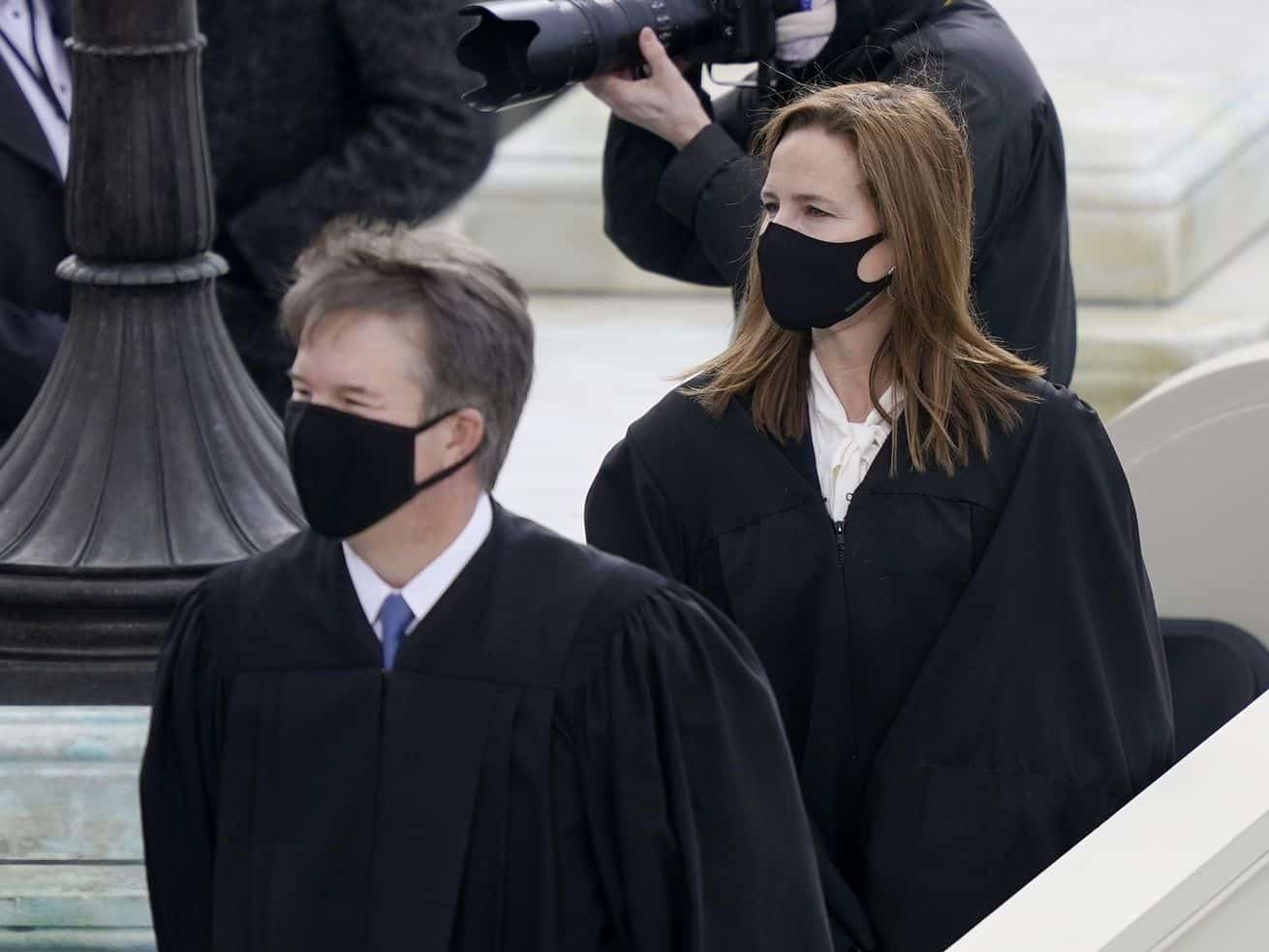 The Court has been surprisingly hesitant to weigh in on abortion. But a pending case is likely to force its hand.

The Supreme Court has been sitting on a potentially very significant abortion case for the last two months, one that the Court’s rules say it should dismiss. We’re likely to find out this week whether the Court will dismiss this case, however, and that decision could tell us a great deal about how fast the Court plans to move in rolling back abortion rights.

In February, about a month after President Joe Biden took office, the Supreme Court announced that it would hear three consolidated cases challenging a Trump administration policy targeting abortion clinics.

Additionally, Title X grant recipients that also perform abortions must impose a “clear physical and financial separation” between any program funded by Title X and abortion services. Planned Parenthood estimated that the cost of complying with this “physical separation” requirement would be “nearly $625,000 per affected service site.”

Many providers, including Planned Parenthood, dropped out of the Title X program altogether because they considered the Trump administration’s rules too burdensome.

The Supreme Court’s decision to hear these cases, which are consolidated under the case name American Medical Association v. Becerra, was somewhat surprising because President Biden had already begun the process of repealing the Trump-era policy when the Court announced that it would take up this case. Biden directed the Department of Health and Human Services (HHS) to “review” Trump’s policy and to “consider, as soon as practicable, whether to suspend, revise, or rescind” it a little over a week after taking office.

Though repealing this Trump-era effort to reduce access to abortion will take months — the Biden administration must complete a lengthy process known as “notice and comment” — the current administration predicts that it will complete this process in the early fall, rendering American Medical Association moot long before the Court is likely to decide the case.

Indeed, in March, the Biden administration filed a joint request alongside the various parties challenging the Trump administration’s Title X rule, which asked the Court to dismiss American Medical Association. That should have been the end of the case, as the Supreme Court’s rules provide that “whenever all parties file with the Clerk an agreement in writing that a case be dismissed,” the Court “will enter an order of dismissal.”

And yet, the Court has held onto the case — at least for now — even though the Court typically does not agree to hear cases that it knows will become moot before the case can be briefed, argued, and decided. And it rarely holds onto a case after all the parties have asked for the case to be dismissed.

We’re likely to learn very soon what the justices plan to do with American Medical Association. In late April, the Court called for briefs explaining whether the Biden administration plans to enforce the Trump administration’s rule until the new regulations rescinding that rule are finalized. The last of these briefs is due this week, so the justices are likely to rule very soon on whether they will dismiss the case.

If the Court does hold onto the case, that would be a deeply worrying sign for supporters of abortion rights. It would suggest that the justices may race to hand down a decision upholding the Trump administration’s rule before the Biden administration can rescind it. And it may also allow the Court’s 6-3 conservative majority to expand the government’s ability to restrict abortion.

Title X provides about $286 million in funding every year for “comprehensive family planning and related preventive health services,” according to the Department of Health and Human Services, with “priority […] given to persons from low-income families.”

By law, no Title X grant money “shall be used in programs where abortion is a method of family planning,” so the money cannot be used directly to provide abortion care. But past administrations have disagreed on just how much separation must exist between health providers who receive Title X funds and abortion providers or facilities.

In 1988, the Reagan administration handed down some fairly strict restrictions on Title X providers — including that projects funded by Title X “may not provide counseling concerning the use of abortion as a method of family planning or provide referral for abortion as a method of family planning.” This 1988 rule was often referred to as the “gag rule,” and the Supreme Court upheld it in Rust v. Sullivan (1991).

But a few months after the Supreme Court decision, President George H.W. Bush backed away from the gag rule, writing in a 1991 memo to HHS that referrals “may be made by Title X programs to full-service health care providers that perform abortions,” provided that abortion wasn’t the provider’s “principal activity.” Then, in 1993, President Bill Clinton took office, and he swiftly rescinded the Reagan era “gag rule.” In 2000, the Clinton administration issued a final rule that required Title X programs to provide “information and counseling” about “pregnancy termination,” and to provide a referral to an abortion clinic “upon request” by the patient, a rule that stayed in place throughout the George W. Bush and Obama administrations.

Then, in 2019, the Trump administration implemented its rule, which imposed strict limits on Title X recipients similar to the ones imposed by the Reagan-era gag rule.

The plaintiffs in American Medical Association and the consolidated cases raise several challenges to the Trump administration’s rule.

Congress enacted two laws in the years following Rust which arguably limit the government’s power to reinstate the 1988 version of the gag rule. The first was a 1996 budget rider which clarified that Title X funds “shall not be expended for abortions,” but that also provided that “all pregnancy counseling shall be nondirective” — directing patients neither toward abortions nor away from them. And a provision of the Affordable Care Act, which President Barack Obama signed in 2010, provides that HHS “shall not promulgate any regulation that … interferes with communications regarding a full range of treatment options between the patient and the provider.”

The plaintiffs argue the Trump rule violates both the 1996 “nondirective” requirement and the Affordable Care Act’s requirement.

They also argue that the Trump administration didn’t provide an adequate justification for many parts of its rule. Under the “notice and comment” process, an agency that intends to hand down a new regulation typically must announce its proposed regulation in advance and give members of the public an opportunity to comment on it. While the agency isn’t required to scrap a proposal simply because some of these comments disagree with it, federal agencies do have some obligation to provide a response to commenters and an explanation for any concerns raised by the commenters.

Several commenters expressed concerns that the Trump administration’s requirement that abortion services be physically separated from Title X programs would impose unreasonable costs on providers — as mentioned above, Planned Parenthood estimated that it would have to pay an average of $625,000 per facility to comply with this requirement.

Yet the Trump administration claimed, without any apparent justification, that it would only cost Title X providers $30,000 to comply with the physical separation requirement. As a lower court explained in striking down this requirement, “there is no justification in the Final Rule for the $30,000 amount,” and a lawyer for the Trump administration was only able to offer a vague explanation for where this number came from. “For all we can tell,” the lower court concluded, “this number was pulled from thin air.”

The court also concluded that, in relying on this seemingly arbitrary $30,000 estimate, the Trump administration did not meet its obligation to explain why it was implementing the new rule and to offer a reasoned response to commenters.

So there are strong legal arguments against the Trump-era rule. Nevertheless, lower court judges have largely split along party lines when asked to answer whether this rule should be upheld.

A conservative 11-judge panel of the United States Court of Appeals for the Ninth Circuit, for example, upheld the Trump-era gag rule — largely relying on the argument that Rust remains good law and that it wasn’t displaced by the 1996 or 2010 laws governing the relationship between providers and patients. The four Democratic members of this panel dissented.

Similarly, the left-leaning Fourth Circuit split entirely along party lines in its decision striking down the Trump rule — with every Democratic appointee joining that result and every Republican appointee in dissent.

So what’s at stake in American Medical Association?

Given this partisan divide among lower court judges, it’s not hard to guess how the Supreme Court — where Republicans hold six of the nine seats — is likely to decide American Medical Association if given the opportunity to do so. The uncertain question in American Medical Association isn’t how these justices will view the legal issues presented by the case, it’s whether the Supreme Court will honor the parties’ request to dismiss the case.

If the justices do not honor that request, that could set off an unseemly race where the Court rushes to hand down its decision before the Biden administration rescinds the Trump-era rule and renders the case moot.

Under the Court’s ordinary procedures, the earliest the justices could hear this case is next October — not nearly soon enough to win the race if the Biden administration is correct that its new rule will be finalized in early fall. So the Court would need to depart from its ordinary procedures, either by scheduling a rare summer oral argument or bypassing oral arguments altogether, in order to decide this case before it becomes moot.

Because it remains unclear whether the case will be dismissed or not, the parties have not even briefed the case. Indeed, it’s not even clear who the Court would appoint to argue in defense of the Trump administration’s rule, although a coalition of Republican state attorneys general and another coalition of conservative and religious health groups seek the right to do so.

Without full briefing, it’s also not entirely clear what’s at stake in the case; we don’t yet know what the rule’s defenders will ask for in their briefs. At the very least, however, the Court could firmly reject the various legal arguments against the gag rule and permit a future Republican administration to reinstate the Trump-era rule shortly after taking office.

The Court could also potentially include language in its opinion suggesting that the gag rule is required by federal law. In a 2020 opinion concerning the Trump administration’s interpretation of a provision of Obamacare, Justice Clarence Thomas’s majority opinion included a bunch of gratuitous language suggesting that several important provisions of Obamacare are unconstitutional. The Court could repeat this performance in the American Medical Association case, effectively using it as a vehicle to limit access to abortion during Democratic administrations.

In the worst-case scenario for abortion rights, the Court could even include some language in its opinion suggesting that both the states and the federal government have broad authority to restrict abortion.

In any event, the obvious course of action is that the Court should dismiss this case. That’s what the Court’s rules call for, and dismissal is especially appropriate because the case is about to become moot.

If the justices decide not to take this obvious course of action, that could be a very worrisome sign about the future of abortion rights.

Elizabeth Warren says she lost her job when she got pregnant. Thousands of women every year say the ...
Reminder: The US will leave the Paris climate agreement this week
Russian hacker indictments reopen old wounds between Clinton and Sanders supporters
Tesla fans have found a new person to blame for Elon Musk’s troubles: his girlfriend
A historic number of women have been sworn in to Congress
The home sales boom means you might end up renting