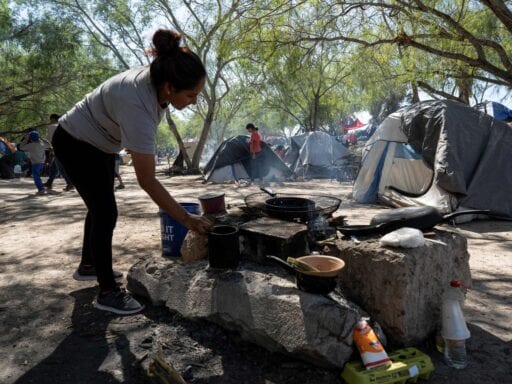 Share
Loading...
A woman cooks at a camp at Matamoros, Tamaulipas state, Mexico, on November 1, 2019. | Lexie Harrison-Cripps/AFP via Getty Images

The policy is a major barrier to asylum seekers arriving at the southern border.

The Supreme Court on Wednesday allowed President Donald Trump to continue sending migrants back to Mexico while they await decisions on their asylum applications in the US for the foreseeable future, setting up yet another high-stakes legal battle over one of the administration’s core immigration policies.

Without explaining their reasoning, the justices decided to allow the policy to remain in effect while the government appeals a lower court ruling that would have blocked the policy in California and Arizona, but kept it in place across all other areas of the southern border. If the Supreme Court decides to take up that case — the most likely outcome — the policy will remain in effect until the justices issue a final ruling. If not, then the lower court’s block will stand.

The policy, known as the Migrant Protection Protocols (MPP) or the “Remain in Mexico” program, went into effect in January 2019. Since then, more than 60,000 asylum seekers have been sent back to Mexico, where they’re under threat from drug cartels and kidnappers and are dependent on volunteers for basic supplies.

The Ninth Circuit had blocked MPP earlier this month, allowing migrants to present themselves at ports of entry and to be admitted to the US to pursue their asylum claims, rather than being forced to stay in Mexico. But it delayed implementing the block on the policy for a week to give the high court time to intervene.

“The Court of Appeals unequivocally declared this policy to be illegal,” Judy Rabinovitz, special counsel in the ACLU’s Immigrants’ Rights Project, said in a statement Wednesday. “The Supreme Court should as well. Asylum seekers face grave danger and irreversible harm every day this depraved policy remains in effect.”

It’s the third time that the justices have prevented lower courts from blocking Trump’s immigration policies. They also allowed the administration to implement a rule that prevents migrants from applying for asylum if they passed through another country other than their own before arriving in the US and a policy that imposes a wealth test on immigrant applying to enter the US, extend their visa, or convert their temporary immigration status into a green card.

The Trump administration had warned in court filings that blocking the policy would create a “substantial risk of immediate chaos on the border, threatening irreparable harm to the government, migrants, and the United States public.” The administration has credited the policy for the recent 75 percent drop in arrests at the southern border, as well as for helping to all but end the practice of detaining families — since most have instead been sent back to Mexico under the program.

A Department of Justice spokesperson reiterated the importance of MPP to the administration’s efforts to improve border security in a statement on Wednesday.

“The Migrant Protection Protocols … have been critical to restoring the government’s ability to manage the Southwest border and to work cooperatively with the Mexican government to address illegal immigration,” they said.

In its decision blocking the policy, the Ninth Circuit found that the government had no authority to send asylum applicants to a neighboring country under immigration statute, or even based on longstanding practice. The court also found that the program violated the US’s international obligations, codified in the Refugee Act, to not return asylum seekers to countries where they would likely face persecution.

“[U]ncontested evidence in the record establishes that non-Mexicans returned to Mexico under the MPP risk substantial harm, even death, while they await adjudication of their applications for asylum,” the opinion states.

The humanitarian crisis MPP has created

Before MPP, both migrants who waited in line at the border and those who were apprehended between ports of entry would have been held at a US Customs and Border Protection processing facility until a border agent determined whether they should be released, transferred to immigration detention, or deported. But under MPP, they are mostly been sent back to Mexico and allowed to enter the US only to attend their immigration court hearings.

They have been waiting in Mexican border cities, where some migrants are lucky to find housing in shelters, hotels, or rooms for rent. But for more than 5,000 others, only colorful tents and tarps, some held up by sticks and stones, stand between them and the elements, even as temperatures drop below freezing. The encampments are clustered around bridges linked to US ports of entry along the Rio Grande, where they rely on volunteers for basic necessities like clean drinking water and warm clothes.

In the camps, migrants remain at risk for extortion, kidnapping, and rape at the hands of cartels and other criminal actors. The advocacy group Human Rights First has identified more than 1,000 public reports of murder, torture, rape, kidnapping, and other violent attacks against migrants sent back to Mexico under MPP.

In Matamoros, a city of about 500,000 people across the border from Brownsville, Texas, about 2,000 migrants had moved into makeshift tent encampments along the Rio Grande — so close to the US border that they can show up at the port for processing whenever their names are called.

Matamoros is a dangerous place: The US State Department has issued a Level 4 “Do Not Travel” advisory for the region due to high rates of violent crime, kidnapping, and robbery.

The encampment has grown to house several thousand people. Some tents have been erected on land contaminated with feces due to a lack of public toilets, raising concerns about E. coli infections. Migrants have no access to running water, leading to poor hygiene and the spread of rashes and funguses. As flu season ramps up, there are concerns it will spread throughout the camps, too.

Sometimes, parents try to send their children to the port of entry alone so that US officials will be forced to process them, believing they will be safer in the US than in the camps, Yael Schacher, a senior US advocate at Refugees International, said. Their settlements are so close to the port that they can wave to their children as they cross the border.

Trump administration officials have dismissed media reports of the dangers facing migrants waiting in Mexico. The US has continued to send aid to Mexico — $139 million in 2018 — but otherwise, advocates haven’t seen any evidence of a US presence on the Mexican side of the border administering aid to migrants.

Had the Ninth Circuit’s block on MPP gone into effect, it would have raised concerns that migrants could have overwhelmed the ports of entry. Processing could have taken a long time if asylum seekers decided to rush the ports and line up by the thousands, especially since the administration limits the number of migrants it screens each day. And those admitted to the US could have potentially been detained in US facilities while they wait for their immigration court hearings, Anwen Hughes and Kennji Kizuka, both attorneys at Human Rights First, told Vox.

Indeed, at least hundreds of migrants showed up at the ports after the Ninth Circuit’s initial ruling, some of them carrying copies of the Ninth Circuit’s decision blocking the policy. But they were later turned away by border agents wearing riot gear.

Poll: 65% of Republicans say Trump’s Ukraine scheme was normal presidential behavior
These are the popular ideas progressives can win with (and some unpopular ones to avoid)
Herd immunity, explained
How Trump could win in 2020
The first big test of Facebook’s oversight board will be the US election
Vox poll: 73 percent of Republican voters are questioning Biden’s victory