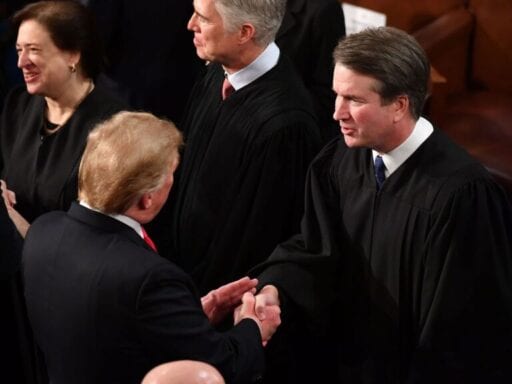 Share
Loading...
President Donald Trump shakes hands with US Supreme Court Justice Brett Kavanaugh before delivering the State of the Union address at the US Capitol in Washington, DC,  | Photo credit should read MANDEL NGAN/AFP via Getty Images

Voting rights during the pandemic are in deep trouble thanks to this Supreme Court.

The Supreme Court handed down two brief, unsigned orders on Friday concerning what restrictions states may place on absentee voting during the coronavirus pandemic. Though neither order is a final judgment — one grants a temporary stay of a lower court decision, the other denies expedited review of an important voting rights case — the practical impact of both orders is that voters in Alabama and Texas will find it harder to cast a ballot during the pandemic.

The Texas order is particularly ominous because it suggests that Texas will be able to apply election rules that ensure that older, Republican-leaning voters have an easy time casting a ballot — while younger voters could be forced to risk infection in order to vote.

The Alabama case is Merrill v. People First of Alabama. Alabama law allows anyone to cast an absentee ballot during the pandemic, but it also imposes certain restrictions on those voters. Among other things, absentee voters must provide a copy of their photo ID, and their ballot must be signed by either two witnesses or one notary public.

A lower court blocked these restrictions “for voters who cannot safely obtain the signatures of two witnesses or a notary public due to the COVID-19 pandemic” and “for absentee voters who are over the age of 65 or disabled and who cannot safely obtain a copy of their photo ID due to the COVID-19 pandemic.” But the Supreme Court stayed that lower court decision — ensuring that, at the very least, the restrictions will be in place for Alabama’s July 14 runoff primary election.

Notably, the Supreme Court’s order in Merrill was joined only by the Court’s five Republicans. All four Democratic appointees dissented. Neither side explained why they voted the way that they did.

The Texas case, meanwhile, is Texas Democratic Party v. Abbott, and the stakes in that case are simply enormous.

Texas law permits voters over the age of 65 to request absentee ballots without difficulty. But most voters under the age of 65 are not allowed to vote absentee. During a pandemic election, that means that older voters — a demographic that has historically favored Republicans over Democrats — will have a fairly easy time participating in the November election. But younger voters will likely have to risk infection at an in-person polling site if they wish to cast a ballot.

This arrangement is difficult to square with the 26th Amendment, which provides that “the right of citizens of the United States, who are 18 years of age or older, to vote, shall not be denied or abridged by the United States or any state on account of age.”

The Court’s order in Texas Democratic Party is subtle, but it most likely means that Texas will be able to deny or abridge the right to vote on account of age, at least during the November election.

Last month, the conservative United States Court of Appeals for the Fifth Circuit blocked a trial judge’s order that would have allowed younger Texans to vote absentee. Although this Fifth Circuit order is not the appeals court’s last word on this case, it is quite unlikely that the plaintiffs in Texas Democratic Party will prevail before the Fifth Circuit, which is among the most conservative courts in the country.

So those plaintiffs asked the Supreme Court to hear their case on an expedited basis. On Friday, the Supreme Court denied that request. As a practical matter, writes SCOTUSBlog’s Amy Howe, this refusal to expedite the Texas Democratic Party case “all but eliminated the prospect that the justices will weigh in on the merits of that dispute before the 2020 election in November.”

Thus, even if the Supreme Court ultimately does decide that Texas’s age discrimination violates the 26th Amendment, that decision will almost certainly come too late to benefit anyone in November.

The Supreme Court’s orders in Merrill and Texas Democratic Party fit a pattern. Last April, in Republican National Committee v. Democratic National Committee, the Supreme Court granted a request from the Republican Party, and ordered all ballots mailed after a certain date in Wisconsin’s April elections to be tossed out — a decision that, in practice, likely forced thousands of voters to risk infection in order to cast an in-person ballot.

The Court’s decision in Republican National Committee was also 5-4, with all five Republican justices in the majority and all four Democrats in dissent.

In recent weeks, the Court has handed down a handful of left-leaning decisions — including a narrow decision temporarily preserving the Deferred Action for Childhood Arrivals (DACA) program and an even narrower decision striking down a Louisiana anti-abortion law.

But on the most important question in a democracy — whether citizens are empowered to choose their own leaders — this Supreme Court remains unsympathetic to parties seeking to protect the right to vote, despite the greatest public health crisis in more than a century.

New York could put a hold on facial recognition in schools. Here’s why.
The Sinner is the rare murder mystery that doesn’t care whodunnit. Instead, it asks, “Why?”
Mr. Feldman goes to Washington
How the air travel industry is scrambling to convince people to fly
This week in TikTok: The influencer hair salon that’s under attack
Report: Robert Mueller referred lobbyists, including Tony Podesta, to Manhattan prosecutors