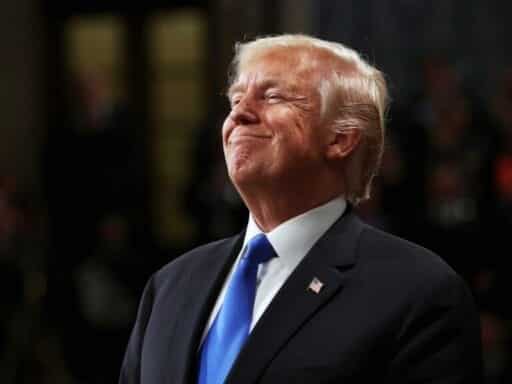 Share
Loading...
President Trump smiles as he delivers the State of the Union address on January 30, 2018. | Win McNamee/Getty Images

Trump’s legal arguments against House Democrats are weak. We’ll soon find out if that matters to this Supreme Court.

The Supreme Court just handed Trump a significant — but potentially very temporary — victory in his legal battle with House Democrats.

In October, a federal appeals court held in Trump v. Mazars that President Trump’s accounting firm must turn over many of Trump’s financial records — including, most likely, his tax returns — to the House Oversight Committee. Trump asked the Supreme Court to stay that decision, and the justices granted that stay on Monday.

Yet, while the Court stayed the lower court’s decision, it also ordered the case to move forward at an unusually fast pace. Trump’s lawyers must file a petition formally asking the Court to hear the case by noon on December 5.

There were no public dissents from the Court’s order, although it is possible that one or more justices voted not to grant the stay but decided to keep that vote private.

The stay will last until the Supreme Court disposes of the case, either in an order announcing that the Court will not hear Mazars on the merits or in an eventual decision reviewing the lower court’s opinion. If Trump’s lawyers do not make the December 5 deadline, the stay will also terminate in that event.

As a practical matter, that means the Supreme Court is likely to agree to give the case a full merits hearing and that a decision is likely by this June. Should Trump lose in the Supreme Court, in other words, the House Oversight Committee will get to see his financial records well before the presidential election.

Trump’s legal arguments, it should be noted, are exceedingly weak.

As the Court explained in Eastland v. United States Servicemen’s Fund (1975), Congress’s investigatory power is broad, and it extends to subpoenas “intended to gather information about a subject on which legislation may be had.” The lower courts that heard Mazars agreed that the House subpoena was properly issued because the House is considering legislation that would impose stronger financial disclosure requirements on the president.

Because the requested documents could inform the House’s decision about whether such legislation is necessary, they concerned “a subject on which legislation may be had.”

Moreover, as the Supreme Court explained in Clinton v. Jones (1997), “we have never suggested that the President, or any other official, has an immunity that extends beyond the scope of any action taken in an official capacity.” Thus, because the House seeks records unrelated to Trump’s actions as president, Trump’s argument that he can resist this particular subpoena is especially weak.

Vox Sentences: A bombing suspect is in custody, but questions remain
The House just passed a $1.4 trillion spending deal — taking a major step to avoid a government shut...
Walmart+ will finally launch in September. Can it compete with Amazon Prime?
How SoulCycle lost its soul
America might be ready for democratic socialism. It’s not ready for the bill.
Trump’s presidential campaign is Too Online