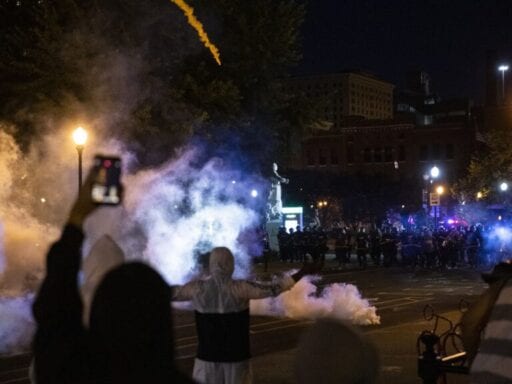 Share
Loading...
Protesters and police stand off as tear gas is deployed in the streets on May 30, 2020, in Louisville, Kentucky. | Brett Carlsen/Getty Images

It looks like qualified immunity is here to stay.

On Monday, the biggest story out of the Supreme Court was a landmark decision holding that federal law prohibits employment discrimination against LGBTQ workers. It was such a significant development that it was easy to miss another announcement that the Court quietly handed down just half an hour earlier.

After months of pondering whether to hear one of several cases challenging qualified immunity, a doctrine that often protects rogue cops from federal lawsuits, the justices announced on Monday that the Court will not hear any of a raft of qualified immunity cases that have been sitting for months on the Court’s docket.

The Court made this announcement without any fanfare, including the qualified immunity cases on a long list of lower-court decisions that the justices announced they would not review on Monday, as the Court typically does when it decides not to hear a particular case.

Only one justice, Justice Clarence Thomas, signaled that he disagreed with the decision not to reconsider qualified immunity. He wrote a brief dissent arguing that the Court should return to an earlier, narrower understanding of when government officials should be immune from civil rights lawsuits.

The upshot of the Supreme Court’s non-action on qualified immunity is that, while thousands of protesters continue to fill the streets to demand additional safeguards against police violence, a majority of the Court appears likely to maintain a doctrine that frequently allows cops to commit egregious constitutional violations and get away with it.

The purpose of qualified immunity is to protect government officials from lawsuits rooted in novel legal theories. As the Supreme Court held in Harlow v. Fitzgerald (1982), “government officials performing discretionary functions, generally are shielded from liability for civil damages insofar as their conduct does not violate clearly established statutory or constitutional rights of which a reasonable person would have known.”

As a practical matter, however, qualified immunity can protect cops that violate the law in surprising and troubling ways.

Take the facts of West v. Winfield, one of several cases the Court turned aside on Monday.

Police approached Shaniz West, saying that they believed her ex-boyfriend — who had an outstanding arrest warrant — was inside her home. After West gave an officer the key to her door and permission for the cops to enter her home, a SWAT team smashed several of her windows, punched holes in her walls and ceilings, and fired so much tear gas into the home that West could not live in it for two months.

Yet, when West sued, a federal appeals court determined that the cops were entitled to qualified immunity. There was no previous case specifically holding that when a homeowner gives police consent to enter their house, that consent does not entitle police to use violent tactics like the ones they used on West’s home. So the SWAT team’s actions did not “violate clearly established statutory or constitutional rights of which a reasonable person would have known.”

Until recently, qualified immunity was a fairly obscure doctrine known to civil rights lawyers and law students cramming for their Federal Courts exam, but largely unknown outside of the legal profession. After weeks of protests catalyzed by the death of George Floyd at the hands of Minneapolis police officers, however, Congress is now considering two competing bills to limit or abolish qualified immunity.

House Democrats introduced a comprehensive criminal justice bill that would strip state and local police, as well as correctional officers, of qualified immunity. Meanwhile, Rep. Justin Amash (I-MI) introduced the “Ending Qualified Immunity Act,” which would prevent any state government official of any kind from raising a qualified immunity defense in a civil rights lawsuit.

At the Court, Justice Thomas, who is typically the most conservative justice, suggested in 2017 that qualified immunity should be significantly reduced — perhaps to the point that police could only claim qualified immunity if they act pursuant to a statute that is later struck down, or if they perform a lawful arrest of someone who is later found innocent. Thomas’s opinion on Monday largely rehashed the concerns he raised in 2017.

Yet it appears that the bulk of Thomas’s colleagues are not interested in rethinking qualified immunity. It takes four votes for the Court to agree to hear a case, but it would take five votes to alter existing doctrine.

The upshot of the Supreme Court’s apparent lack of interest in qualified immunity is that change will come, if at all, from Congress, and it is unlikely to come so long as Trump sits in the White House. Trump’s press secretary labeled proposals to reform qualified immunity as a “non-starter.”

The abandoned asylum seekers on the US-Mexico border
Pandemic unemployment insurance is expiring soon. This economist has a fix for it.
Healthcare.gov glitches almost ruined the end of open enrollment. Is there a better way?
Vox Sentences: DC braces for impact
Google employees join protest at Alphabet’s shareholder meeting
Trump lashes out at FBI Director Wray for telling the truth about the IG report