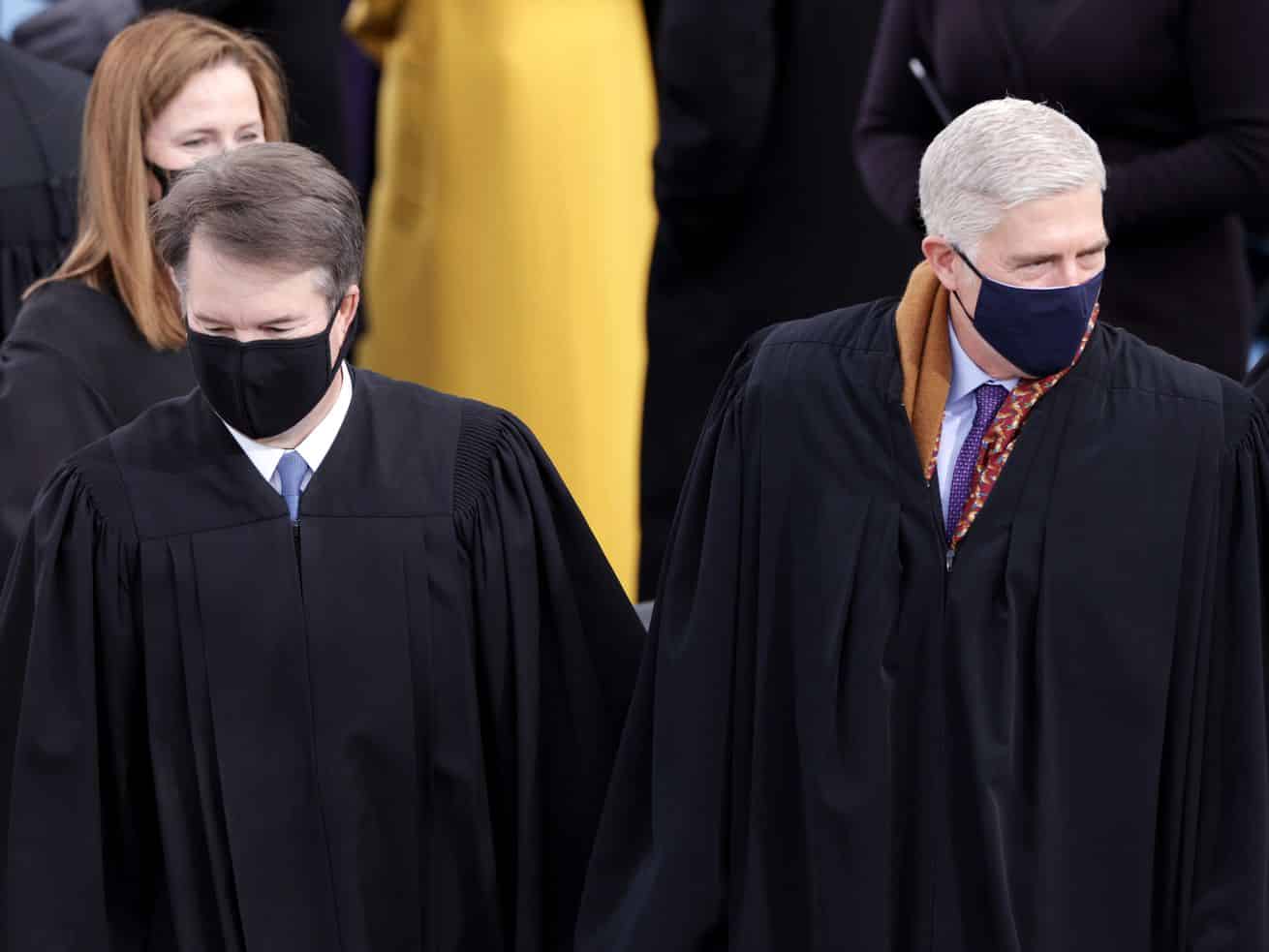 The Supreme Court could make the NRA’s dreams come true.

The Supreme Court announced on Monday that it will hear New York State Rifle & Pistol Association Inc. v. Corlett, a case that could transform the judiciary’s understanding of the Second Amendment and lay waste to many of the nation’s gun laws.

The case involves New York state’s handgun licensing law — a law that has been in place since 1913 — which requires someone who wishes to carry a handgun in public to demonstrate “proper cause” in order to obtain a license permitting them to do so.

Proper cause can be demonstrated in several ways. Someone who wishes to use a gun for hunting or target practice may obtain a license permitting them to do so, although this type of license can be restricted to only allow the bearer to use their gun for these purposes. People in certain kinds of work may also obtain licenses — a storekeeper might be issued a limited license allowing them to keep a gun in their store for protection, for example, or a bank messenger may be allowed to carry a gun to protect themselves and the money they transport.

But to obtain an unrestricted license to carry, New York courts have established that an applicant must “demonstrate a special need for self-protection distinguishable from that of the general community or of persons engaged in the same profession.” So someone might be able to obtain a license because they have a particular fear of their stalker — but someone who merely wants to carry a gun, because of a general belief that it would be useful if they are ever the victim of a violent crime, cannot obtain a license.

The plaintiffs in Corlett include a New York state gun rights group and two New York men who applied for a license to carry a handgun in public and were denied that license. They claim that “law-abiding citizens” have a Second Amendment right to carry a gun in public — and the Supreme Court, with its 6-3 conservative majority, could agree with them.

In fairness, there is one early sign that the Court may be inclined to place some limits on its decision in Corlett. Although the plaintiffs asked the Court to rule on a broad question — “whether the Second Amendment allows the government to prohibit ordinary law-abiding citizens from carrying handguns outside the home for self-defense” — the justices announced on Monday that they will only resolve a more narrow question: “whether the State’s denial of petitioners’ applications for concealed-carry licenses for self-defense violated the Second Amendment.”

Nevertheless, this narrower question is still broad enough to allow the Supreme Court to rewrite a decade of Second Amendment precedents, to unwind a consensus within the lower courts that permits many gun regulations to stand, and then to allow those lower courts to complete the process of dismantling other gun laws.

How the Supreme Court’s current precedents approach the Second Amendment

The Second Amendment provides that “a well regulated Militia, being necessary to the security of a free State, the right of the people to keep and bear Arms, shall not be infringed,” and until fairly recently, the Supreme Court took the first 13 words of this amendment very seriously. As the Court explained in United States v. Miller (1939), the “obvious purpose” of the Second Amendment was to “render possible the effectiveness” of militias. Thus, the amendment must be “interpreted and applied with that end in view.”

But the Supreme Court largely abandoned this approach in its 2008 decision in District of Columbia v. Heller, holding for the first time that the Second Amendment protects an individual’s right to bear arms.

While Heller marked a sea change in the Court’s approach to the Second Amendment, it was also a heavily caveated victory for gun rights advocates. Among other things, Heller suggests that bans on “carrying concealed weapons” are lawful, as are “longstanding prohibitions on the possession of firearms by felons and the mentally ill, or laws forbidding the carrying of firearms in sensitive places such as schools and government buildings, or laws imposing conditions and qualifications on the commercial sale of arms,” or bans on “dangerous and unusual weapons.”

Additionally, while Heller struck down the District of Columbia’s “absolute prohibition of handguns held and used for self-defense in the home,” the opinion is much less clear about gun rights outside the home.

And yet, while the Supreme Court has largely stayed out of the business of interpreting the Second Amendment since Heller, a clear consensus has emerged in the lower courts regarding how to interpret that amendment — even though this consensus is not shared by many key members of the Supreme Court.

The consensus approach to the Second Amendment, briefly explained

In the absence of more guidance from the Supreme Court on how to apply the Heller decision, lower federal courts have largely coalesced around the same basic approach to Second Amendment cases.

At least 10 federal appeals courts apply what federal appellate Judge Stephen Higginson describes as a “two-step analytic framework.” Under this framework, “severe burdens on core Second Amendment rights” are subject to “strict scrutiny,” the most skeptical level of review in most constitutional cases. Meanwhile, “less onerous laws, or laws that govern conduct outside of the Second Amendment’s ‘core,’” are subject to a more permissive test known as “intermediate scrutiny.”

Under this consensus framework, gun regulations that impose very serious restrictions on “core” Second Amendment rights — which Higginson described as the right of “law-abiding, responsible citizens to use arms in defense of hearth and home” that the Court recognized in Heller, but may also include some guns rights that were historically considered important — will typically be struck down, while less severe restrictions or gun laws that don’t burden the Second Amendment’s “core” are more likely to be upheld.

In 2012, the United States Court of Appeals for the Second Circuit applied this framework to the gun licensing regime at issue in the Corlett case, and it upheld that regime. In an opinion by George W. Bush appointee Judge Richard Wesley, the Second Circuit explained that there is a long tradition of laws in the United States that prevent people from carrying guns outside of their homes.

“During the Founding Era,” Wesley wrote, “many states prohibited the use of firearms on certain occasions and in certain locations.” North Carolina, for example, forbade “going armed at night or day ‘in fairs, markets, nor in the presence of the King’s Justices, or other ministers, nor in no part elsewhere.’” In the 19th century, Georgia and Tennessee banned outright the sale of weapons, such as handguns, that could be concealed. And New York’s own licensing regime is more than a century old.

Why the consensus approach is in danger

While lower court judges have largely embraced the “two-step analytic framework” applied by most circuits, there have been a few dissenters. One dissenter is Justice Brett Kavanaugh, who argued in a 2011 dissenting opinion, when he was still a lower court judge, that the consensus approach should be abandoned. “Courts are to assess gun bans and regulations based on text, history, and tradition,” Kavanaugh claimed, “not by a balancing test such as strict or intermediate scrutiny.”

In that 2011 case, Kavanaugh would have struck down a law banning semi-automatic assault weapons and requiring gun owners to register their firearms.

Justice Amy Coney Barrett, meanwhile, also called for a stricter Second Amendment when she was a lower court judge. Recall that Heller suggested that “longstanding prohibitions on the possession of firearms by felons and the mentally ill” are constitutional. But, dissenting in Kantor v. Barr (2019), Barrett claimed that this rule should be shrunk so that only “dangerous people” may be prohibited from owning a gun. So under Barrett’s framework, a person convicted of a nonviolent felony like mail fraud would still have a Second Amendment right to own a gun.

There’s also a third reason to suspect that the Supreme Court is likely to use the Corlett case to move the law dramatically to the right.

Shortly before his death in 2019, retired Justice John Paul Stevens revealed some of the internal deliberations behind the Supreme Court’s Heller decision. After former Justice Antonin Scalia, the author of Heller, circulated his original draft to the Court, former Justice Anthony Kennedy asked for “some important changes” to that draft.

Because Heller was a 5-4 decision, Scalia needed Kennedy’s vote to hold onto his majority. According to Stevens, it was Kennedy who requested that the opinion include language stating that Heller “should not be taken to cast doubt” on many existing gun laws.

The current Court, in other words, is much more conservative than the Court that decided Heller in 2008. It’s not even clear that a majority of the current Court supports the portions of Heller that limit the scope of the Second Amendment — much less the kind of analysis that led the Second Circuit to uphold New York’s gun licensing law.

The future of gun control in the United States could be quite grim — and Corlett could mark the moment when lawmakers’ power to fight gun violence falls apart.

Here’s why Google workers plan to protest their employer at Pride Parade this weekend
7 authors tell us how 20 years of Harry Potter shaped their lives
John Delaney’s been running for president since 2017 — and it’s finally come to an end
Trump signed a “phase one” trade deal with China. Here’s what’s in it — and what’s not.
“Obamagate”: Trump’s latest conspiracy theory, explained
Can guided tours save Airbnb?