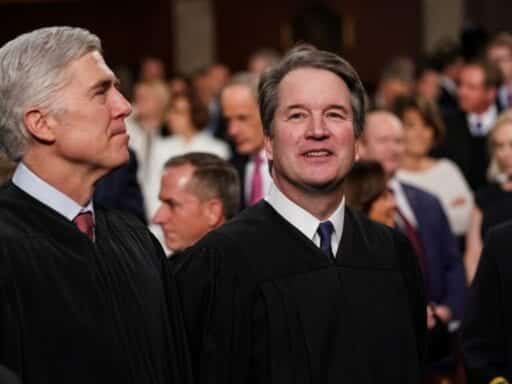 The Court is poised to fulfill the NRA’s Second Amendment fantasies.

New York State Rifle & Pistol Association v. City of New York, the biggest guns case to reach the Supreme Court in more than a decade, began with a tiny dispute.

New York City offers two kinds of licenses to gun owners. A “carry” license permits them to carry a handgun for “target practice, hunting, or self-defense.” The less permissive “premises” license, meanwhile, permits gun owners to “have and possess in his dwelling” a handgun. Under a now-repealed rule, premise license holders were only allowed to bring the gun out of their home for limited purposes, including to practice shooting at seven specific gun ranges.

The plaintiffs in New York State Rifle brought a narrow challenge to this framework. As a federal appeals court explained in an opinion upholding the city’s repealed rule, some of the plaintiffs “seek to transport their handguns to shooting ranges and competitions outside New York City.” One plaintiff also owns two homes, and he wants to be able to transport the same gun between these two homes.

Yet the Supreme Court has so far refused to dismiss the case as moot. And if the plaintiffs have their way, the Court will wind up deciding a much bigger question than the one it originally agreed to hear.

Paul Clement, the prominent conservative lawyer representing the plaintiffs, submitted a brief that presents the case as a grand fight over “draconian restrictions on the possession and transport of handguns.” Even though his clients already won with New York City and State changing its laws to accommodate them, Clement wants to proceed. And he’s urging the Court to see this case as a much bigger challenge than the one his clients raised in the lower courts.

That’s a highly unusual move. The Supreme Court’s rules instruct lawyers that merits briefs “may not raise additional questions or change the substance of the questions” originally presented to the Court.

In any event, it’s not hard to guess why gun rights advocates hope that this case becomes larger. The case was first brought in 2013, with the relatively moderate Anthony Kennedy on the Court. In 2019, Kennedy is gone and the more conservative Brett Kavanaugh is in his place. New York State Rifle could significantly expand Second Amendment rights now that we have a more conservative Supreme Court.

The plaintiffs’ original modest ask, in other words, made sense when they probably thought they could only win incremental victories before a relatively moderate Court. But now they most likely have five votes for something much bigger. So why not ask for a revolution?

Months before his death earlier this year, retired Justice John Paul Stevens revealed some of the Court’s secret deliberations in District of Columbia v. Heller (2008), the landmark Supreme Court decision holding that the Second Amendment protects an individual right to bear arms. In Heller, the Court divided 5-4 along ideological lines, and Kennedy joined his fellow conservatives in the majority.

Yet, in a 2018 interview with the New York Times’ Adam Liptak, Stevens revealed that Kennedy requested “some important changes” to the original draft of the Heller opinion. This language stated that Heller “should not be taken to cast doubt” on many existing gun laws.

The final Heller opinion states that “the right secured by the Second Amendment is not unlimited.” Heller suggests that “longstanding prohibitions on the possession of firearms by felons and the mentally ill, or laws forbidding the carrying of firearms in sensitive places such as schools and government buildings, or laws imposing conditions and qualifications on the commercial sale of arms” are all valid, as are bans on “dangerous and unusual weapons.”

Thanks to Justice Stevens, we now know that such mitigating language probably would not have made it into the Heller opinion without Kennedy’s intervention.

Kavanaugh, to put it mildly, does not share Kennedy’s trepidation about an overly expansive Second Amendment. Shortly after the Supreme Court decided Heller, the District of Columbia passed a new law banning semi-automatic “assault weapons” and requiring gun owners to register those weapons. That law never reached the Supreme Court, but a lower appeals court did hear a challenge to this new law in a 2011 case called Heller v. District of Columbia (Dick Heller was a party in both Heller cases, hence the similar case names).

In this second Heller case, two judges — both of whom are Republican appointees — largely upheld the new law (though they did call for further proceedings on the District’s gun registration requirement). The third judge was Kavanaugh, and he argued in dissent that “both D.C.’s ban on semi-automatic rifles and its gun registration requirement are unconstitutional under Heller.”

Kavanaugh wants to significantly expand the scope of the Second Amendment

Prior to Heller, the Supreme Court rejected the thesis that the Second Amendment protects an individual right, holding instead that the “obvious purpose” of the amendment was “the preservation or efficiency of a well regulated militia,”

Yet while the Supreme Court’s Second Amendment jurisprudence is underdeveloped, the lower courts have reached a consensus on how this amendment should be interpreted. At least 10 federal appeals courts follow what Judge Stephen Higginson described as a “two-step analytic framework.” Under this framework, “severe burdens on core Second Amendment rights” are subject to “strict scrutiny,” the most skeptical level of constitutional review. “Less onerous laws, or laws that govern conduct outside of the Second Amendment’s ‘core’” face a more permissive test known as “intermediate scrutiny.”

But Kavanaugh rejects this consensus. In his 2011 dissent, he argued for an entirely different framework — “courts are to assess gun bans and regulations based on text, history, and tradition, not by a balancing test such as strict or intermediate scrutiny.”

Kavanaugh’s framework, by contrast, is novel. And its full implications are unclear. Nevertheless, it’s a safe bet that Kavanaugh’s “text, history, and tradition” framework would lead to a much more expansive Second Amendment than the consensus framework, since Kavanaugh dissented to the right of two of his Republican colleagues in the second Heller case.

If the Supreme Court reaches the merits of the New York State Rifle case, it is very likely that there will be five votes to significantly expand the scope of the Second Amendment — even if there aren’t five votes to adopt Kavanaugh’s particular framework.

So there’s little doubt why New York City changed its gun rules — or why the state passed a law that effectively forbids the city from ever reinstating its old rules. New York is dominated by Democrats, and Democrats typically view the Second Amendment very differently than Justice Kavanaugh does. Their best chance to keep the Supreme Court from nuking many gun laws is to render New York State Rifle moot, and that’s exactly what they did.

New York City changed its rules to allow the New York State Rifle plaintiffs to do what they originally wanted to do. And New York State enacted a law providing that people with premises licenses may bring their gun to “another dwelling or place of business of the licensee where the licensee is authorized to have and possess such pistol or revolver,” to “an indoor or outdoor shooting range that is authorized by law to operate as such,” or to “a shooting competition at which the licensee may possess such pistol or revolver consistent with” the law.

Thus far, however, the Court has resisted the city’s efforts to have the case dismissed as moot. Last October, the Supreme Court considered whether to dismiss New York State Rifle because of its mootness problem. The justices decided instead to put off further discussion of mootness until the December 2 oral arguments.

Some amicus briefs argue that the case should not be dismissed because of a doctrine called “voluntary cessation.” As a general rule, this doctrine provides that a court may retain jurisdiction over a case after the defendant voluntarily quits their allegedly illegal behavior. It exists to prevent defendants from avoiding litigation by perpetually stopping their behavior, dismissing any lawsuits against them, and then resuming the same behavior.

Yet, as a brief submitted on behalf of a group of legal scholars argues, New York State Rifle is not a voluntary cessation case. Because the state passed a law forbidding New York City from reinstating its own rules, it’s not possible for the city to resume its allegedly illegal behavior if this case is dismissed.

That leaves Clement’s gambit — to simply assert a broader claim before the Supreme Court than the one his clients raised in the lower courts. If New York State Rifle is a grand showdown over whether New York may impose any restrictions on gun possession outside the home, then the case is not moot, and the Supreme Court may use it as a vehicle to expand the Second Amendment.

New York State Rifle, in other words, isn’t just a case about what the Second Amendment means. It’s a test of whether the Court’s Republican majority is so impatient to expand that amendment that they will ignore the ordinary rules governing Supreme Court litigation in order to determine the merits of this case.

China extends reach in Hong Kong over Tiananmen Square vigil
Trump’s latest interview on Russia shows the profound crisis facing America
Mitch McConnell hints he could block the next stimulus package
Why Georgia has runoff elections
5 great movies from TIFF that flew under the radar
The real differences between the 2020 Democrats’ health care plans, explained