The Supreme Court’s drastic shift to the right, cartoonsplained 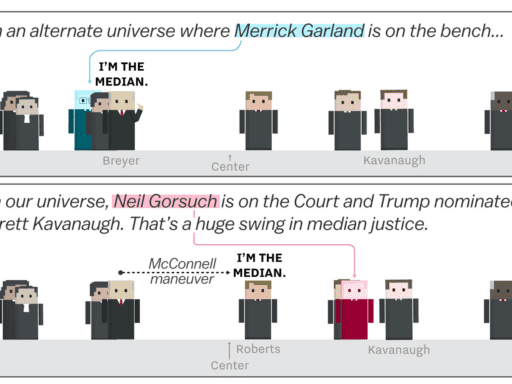 President Trump’s pick to replace Anthony Kennedy will lead to a much more conservative Court.

President Donald Trump nominated Brett Kavanaugh to the Supreme Court Monday to replace retiring Justice Anthony Kennedy. If confirmed by the Senate, the Court will almost certainly drift further to the right.

For decades, Kennedy represented what scholars call the “median justice,” which gave him the swing vote in several decisions that split along ideological lines.

But with this new appointee, the Court now has a new, more conservative median justice: Chief Justice John Roberts.

Using a measure developed by political scientists Andrew Martin and Kevin Quinn, we can see that Roberts has actually been moving to the center since his appointment, much like Kennedy did over his career — a reminder that the median justice may not be ideologically static over the course of their Supreme Court stint.

But Roberts is still solidly conservative. Could he continue that drift to the middle? Maybe. But given Roberts’s record, his slow shift to the center probably won’t assuage people who are worried about specific issues, like reproductive rights.

To grasp how influential Kennedy was on this Court, take a look at this chart showing the history of the median justice.

Chief Justice Roberts, just 63, has already had an influential tenure. And if he serves into his 80s (not uncommon these days) he could hold the middle for the next several decades, assuming the Court’s composition stays the same.

But the Supreme Court is volatile, and it could easily shift further right

But the Court could also very easily get even more conservative.

The Court’s oldest members — Stephen Breyer (79) and Ruth Bader Ginsburg (85) — are liberals. If either of them was replaced by a hardline conservative, it would drastically shift the middle.

In fact, the Court has often been one justice away from a drastic shift in the median justice’s ideology. The animation below first displays the median justice, and then it shows you where the next-most conservative judge would’ve been in each term. On the far right, you can see the shift the Court is about to make, from Kennedy to Roberts:

We can see an equally big swing in the other direction, if we highlighted the next-most liberal judge in each term. On the far right, you can see the shift the Court would’ve made had President Barack Obama’s nominee, Merrick Garland, been confirmed in 2016.

But, of course, McConnell never gave Garland a confirmation vote. Trump nominated a conservative in Neil Gorsuch. And if Kavanaugh is confirmed, McConnell’s maneuver will end up swinging the Court’s median justice from what would have been Breyer to Roberts. That’s a huge swing, and it will likely drastically change the direction of American jurisprudence for decades.

A wild card in the 2020 primaries: New Hampshire’s independent voters
The White House squashed a bipartisan Senate bill to stop election interference
Trump finally uses the Defense Production Act to make ventilators. But that might not solve the prob...
The Ford-Kavanaugh sexual assault hearings, explained
A national US power grid would make electricity cheaper and cleaner
The charges against former Minnesota police officer Derek Chauvin, explained