The Supreme Court’s new, deeply fractured decision on churches and the pandemic, explained 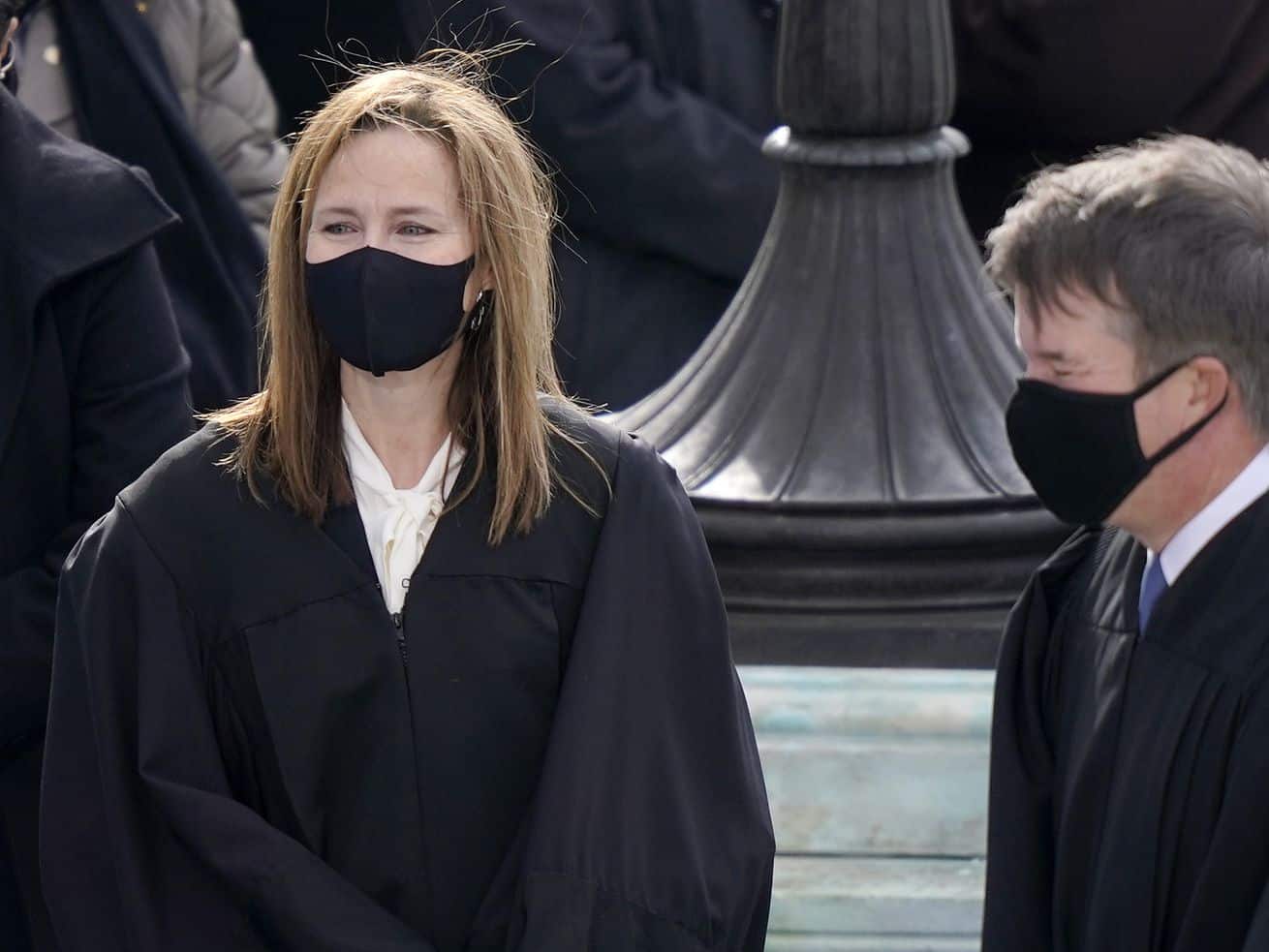 The Supreme Court handed down an unusually messy order Friday night, in a case brought by a church claiming that it should be exempted from several rules California put in place to prevent the spread of Covid-19. The justices split four ways in the case, South Bay United Pentecostal Church v. Newsom, with various members of the Court’s Republican majority divided into three different camps.

Interestingly, Justice Amy Coney Barrett wrote her first signed opinion since joining the Supreme Court, and her opinion takes a position that is slightly to the left of her most conservative colleagues. Though Barrett’s opinion is still quite conservative, it suggests that there may be some daylight between her and her most reactionary colleagues.

South Bay involves a bevy of limits that California imposes on houses of worship, and on other places where people ordinarily congregate in large groups for extended periods of time. In the parts of the state with the most severe Covid-19 outbreaks, California mandated worship services be conducted outside to minimize the risk of infection. In areas where Covid-19 is less prevalent, the state has said services may be conducted indoors, but only at limited capacity — with stricter capacity limits in areas where the disease is more common.

Additionally, the state bans indoor singing and chanting because, in the words of one of the state’s expert witnesses, “most scientists believe that group singing, particularly when engaged in while in close proximity to others in an enclosed space, carries a high risk of spreading the COVID-19 virus through the emission of infected droplets.”

Significantly, these restrictions apply equally to houses of worship and to similar, secular activities. Theatres, lecture halls, and other places where people gather in auditorium-like settings are subject to the same restrictions that apply to places of worship in their area. The ban on indoor singing applies to political rallies, school music recitals, and other secular activities, just as it applies to religious services. (Although there is one possible exception to the singing ban, which will be explained below.)

Because the justices split four different ways in South Bay, it’s not at all clear what legal rule judges should apply in future, similar cases. But the Court’s order blocks the ban on indoor worship. It leaves the capacity limits and the indoor singing ban in place, for now, but the Court’s order also permits the plaintiffs to gather additional evidence and try to convince a lower court to strike down those limits as well.

Religious liberty plaintiffs who could prove discrimination typically prevailed, while plaintiffs who challenged a state law that applies equally to religious and secular behavior typically lost their case. (A federal statute applies a stricter rule to federal laws that burden religious exercise, so religious liberty plaintiffs are much more likely to prevail in suits against the federal government than they are in suits against a state.)

The night before last Thanksgiving, however, the Supreme Court handed down its decision in Roman Catholic Diocese of Brooklyn v. Cuomo, which vastly expanded the Court’s definition of what constitutes “discrimination” against religion. Prior to Roman Catholic Diocese, the Court’s decisions indicated that states were only required to treat religious activity the same as “analogous non-religious conduct.” So a state could impose restrictions on a church so long as the same restrictions applied to secular institutions that are similar in character to that church, such as lecture halls, movie theatres, and other places where people sit together for extended periods of time.

Roman Catholic Diocese, however, blocked New York’s strict occupancy limits on places of worship because the same restrictions didn’t apply to secular businesses that are quite unlike houses of worship, such as “acupuncture facilities, camp grounds, [and] garages.” The Court’s decision in Roman Catholic Diocese suggested, in other words, that religious discrimination exists if a state treats any secular institution differently than a religious institution, no matter how dissimilar those two institutions might be.

With this background in mind, let’s take a quick look at each of the four opinions in the South Bay case.

Justice Neil Gorsuch, joined by Justices Clarence Thomas and Samuel Alito, took the most expansive view of what constitutes religious discrimination. They would have blocked California’s public health limits on worship services in their entirety — although Alito would have stayed that decision for 30 days to give the state an opportunity to show that it absolutely must leave some restrictions in place to prevent the spread of Covid-19.

Notably, these three justices were the only three who would have ended California’s ban on indoor singing, which they claim is discriminatory even though it applies equally to non-religious gatherings such as political rallies.

California, Gorsuch notes, might permit indoor singing to occur on Hollywood film sets (although he admits that there is “some confusion over what rules actually apply to Hollywood”). Thus, by allegedly treating worship services differently than Hollywood film sets, Gorsuch claims that California discriminates against religion.

It’s worth noting that there is a very significant distinction between religious services and the film industry. As Justice Elena Kagan notes in her dissenting opinion, “film production studios in California . . . must test their employees as many as three times a week,” and it would be extraordinarily difficult to apply a similar testing regime to houses of worship. But, under Gorsuch’s approach, this important distinction between film studios and places of worship is largely irrelevant.

Justice Amy Coney Barrett’s opinion, which was joined by Justice Brett Kavanaugh, is slightly to the left of Gorsuch’s view. Though Barrett agrees with Gorsuch that “if a chorister can sing in a Hollywood studio but not in her church, California’s regulations cannot be viewed as neutral,” she concedes that the “record is uncertain” regarding what rules apply to film studios. Accordingly, her opinion allows the indoor singing ban to remain in effect, for now, while additional litigation takes place to figure out how the state treats Hollywood.

Significantly, Barrett’s opinion also suggests that she does not want to tear down completely the distinction between cases involving religious discrimination and cases involving universally applicable laws. “It remains unclear whether the singing ban applies across the board (and thus constitutes a neutral and generally applicable law) or else favors certain sectors (and thus triggers more searching review),” Barrett writes.

The Supreme Court’s 1990 decision in Employment Division v. Smith established the rule that neutral state laws of general applicability may be applied to religious institutions, but this decision has been under fire almost since the day it was decided. It is particularly loathed by religious conservatives, and there is a case pending before the Supreme Court right now which seeks to overrule Smith.

Barrett’s opinion in South Bay, however, suggests that she may not be willing to go quite that far. And her decision to break with Gorsuch may be an early sign that she is a somewhat more moderate justice than the Court’s most conservative members.

The four remaining justices all called for the Court to be more deferential to public health officials who are struggling to contain a pandemic. Writing only for himself, Chief Justice John Roberts emphasizes his view that “the ‘Constitution principally entrusts the safety and the health of the people to the politically accountable officials of the States.’” That said, Roberts also concludes that an outright ban on indoor services, even in areas with severe Covid-19 outbreaks, goes too far.

Finally, Justice Kagan, in an opinion joined by Justices Stephen Breyer and Sonia Sotomayor, scolds her colleagues for displacing “the judgments of experts about how to respond to a raging pandemic.” She concludes her opinion with a rhetorical flourish:

[I]f this decision causes suffering, we will not pay. Our marble halls are now closed to the public, and our life tenure forever insulates us from responsibility for our errors. That would seem good reason to avoid disrupting a State’s pandemic response. But the Court forges ahead regardless, insisting that science-based policy yield to judicial edict.

Kagan, it is worth noting, has historically avoided using such harsh language, and she’s been quite open about her desire to broker compromises with her conservative colleagues that prevent radical changes to the law. The fact that Kagan is now using such bleak language to criticize her colleagues suggests that she may no longer believe that such compromises are possible now that the Court has a 6-3 Republican majority.

What Barrett’s opinion could say about the future

Amy Coney Barrett is only 49-years-old, which means that she could serve on the Supreme Court for three decades or more. And, while she is known to be quite conservative, it’s not yet clear whether she shares some of the most extreme views held by her most conservative colleagues. Her opinion in South Bay is the first sign since she joined the Court that she may be more moderate than, say, Justice Thomas.

Like Thomas and Gorsuch, Barrett identifies as an originalist, meaning that she believes that the Constitutions’ words must be read as they were understood when they were ratified. Some originalists, such as Thomas, argue that courts must follow what they believe to be the original meaning of the Constitution even when such a decision would do considerable violence to the law. Thomas, for example, has suggested that federal child labor laws are unconstitutional.

As a law professor, Barrett seemed to reject this extreme position, writing that there are some past decisions that “no serious person would propose to undo even if they are wrong.” In a 2016 article Barrett co-authored, she acknowledged that “adherence to originalism arguably requires, for example, the dismantling of the administrative state, the invalidation of paper money, and the reversal of Brown v. Board of Education,” but Barrett appears to recognize that it would be irresponsible for her to declare the dollar itself unconstitutional.

It’s important not to overread these nods towards moderation in Barrett’s record. She is a very conservative judge. And it’s hardly an act of heroic restraint to declare that public school segregation should remain illegal. Or that federal child labor laws should continue to exist.

But if Barrett does tend to vote more like Kavanaugh — and less like Thomas, Alito, or Gorsuch — that could matter a great deal in future cases.

In the lead up to the 2020 election, for example, Thomas, Alito, Gorsuch, and Kavanaugh all called for fairly radical changes to American election law — changes that are likely to disenfranchise countless voters if a fifth justice signs onto them. But Thomas, Alito, and Gorsuch all signaled that they would apply such changes retroactively, meaning that voters who complied with the rules that were in place when they cast their ballots would be disenfranchised if those voters failed to comply with new rules that were invented after they had already voted.

Kavanaugh, at the least, was unwilling to go that far in a South Carolina case — a case that would have disenfranchised as many as 20,000 voters if Thomas, Alito, and Gorsuch had gotten their way. Under Kavanaugh’s approach in that case, voters who followed the rules that were in place when they cast their ballots were not punished for failing to predict the future.

Like Barrett, in other words, Kavanaugh is a rather conservative judge. But there is a significant difference between his approach to judging, and the often nihilistic approach taken by Thomas, Alito, and Gorsuch.

And, if Barrett proves to be more like Kavanaugh than like the three most conservative justices, that means that she might put the brakes on some of the most extreme ideas — such as retroactively disenfranchising voters — supported by Thomas, Alito, or Gorsuch.