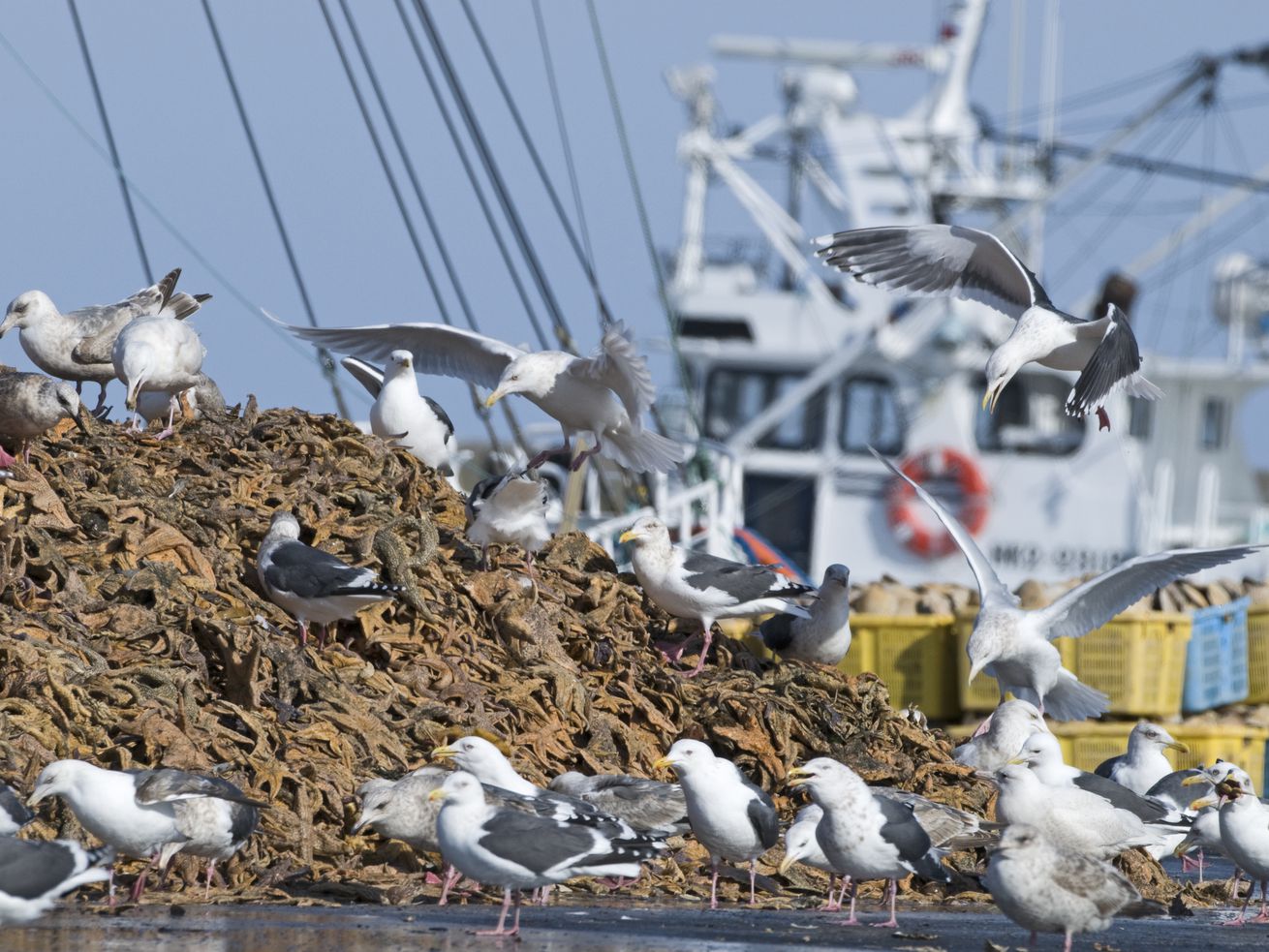 Seafood has generally been considered part of a low-carbon diet, but new research points to a surprising link between fishing and carbon emissions. Bottom trawling — a widespread fishing practice — emits as much carbon dioxide as airplanes do annually, a study published Wednesday in the journal Nature found.

Bottom trawling, which entails dragging a weighted net along the ocean floor to catch low-lying seafood such as shrimp, crab, and flounder, is notorious for wreaking havoc on ecosystems. In addition to the species the trawler targets, turtles and other marine life can get caught in the large nets and can die as a result.

On top of that, we’re learning that trawlers also release significant carbon dioxide emissions into the ocean by disrupting carbon-rich sediments when they rake the seafloor.

Countries have an opportunity to tackle this newfound source of emissions and protect marine species later this year. World leaders are expected to convene in Kunming, China, for the most significant United Nations biodiversity negotiations in a decade. Facing an escalating sixth mass extinction, a leading bloc of nations is calling for the conservation of 30 percent of land and 30 percent of oceans by 2030.

This new study may help inform those negotiations. It shows that protecting biodiversity doesn’t have to mean cutting off seafood supplies — and that fishing sector emissions can be slashed at the same time.

“Usually we’ll talk about these things separately,” said Rashid Sumaila, a professor of fisheries economics at the University of British Columbia who was not involved in the study. “Adding the three together is new. They are all actually interconnected, and they are all pointing to the same thing: We’re putting too much pressure on our natural systems.”

Let’s look at how the researchers say nations can tackle these three problems at once.

Warning signs about the ocean’s deteriorating health have emerged in recent years; for instance, one-third of fish stocks were being fished at unsustainable levels as of 2017, according to the UN Food and Agriculture Organization. But this is the first time researchers have calculated the staggering global emissions from bottom trawling.

To figure out this sector’s carbon footprint, the team behind the Nature study underwent a painstaking process of reviewing mining records and other data to compile a map of the carbon stored in seabeds globally. Then they overlaid that map with data from the nonprofit Global Fishing Watch showing where trawlers have been active. Lastly, they modeled the emissions released when dormant, carbon-rich sediment is kicked up by that trawling activity and consumed by microbes, converting it into carbon dioxide.

The answer: 1.47 gigatons (as of 2016). That’s more than Japan’s annual emissions, and comparable to what the airline industry is responsible for.

What’s more, an area isn’t depleted of carbon after being trawled once. Emissions are still released for up to 400 years at a rate of 40 percent of the initial year’s emissions as new layers of sediments are disrupted, the study found.

“That, to me, was the extremely shocking part. In the foreseeable future, there’s no end to this if we continue to trawl,” said Trisha Atwood, an associate professor of watershed sciences at Utah State University and a co-author of the study.

The emissions that remain in the water also have serious consequences. One of the biggest issues has to do with the ocean’s role as a carbon sink. The ocean already absorbs more than a third of annual carbon dioxide emissions. However, scientists expect that human-induced greenhouse gas emissions will overwhelm the uptake process, causing it to slow down this century.

If the ocean doesn’t absorb as much carbon, that means more will end up in the atmosphere, stoking global warming. By adding more emissions to the ocean, trawling emissions exacerbate this problem.

“If we’re adding the entire aviation fleet’s worth of greenhouse gas emissions into the ocean every year just from trawling, that’s going to reduce the ability of the ocean to take up more atmospheric CO2,” Atwood said. At the same time, the emissions also increase ocean acidification, which has devastating effects on the world’s coral reefs, among other things.

To tackle the problem, countries need to start documenting these ocean emissions along with land-based emissions in their inventories, Atwood said. “I think there needs to be a program developed to start accounting for emissions in the ocean in the same way, because once we lose the ocean as a sink, we’re really in trouble,” she added. This kind of inventory could also help hold the trawling industry accountable, just as the electricity and auto industries are targeted for emissions reductions.

If an international agreement is struck at this year’s UN biodiversity summit to preserve 30 percent of the ocean, nations will have an opportunity to design protected areas with these newfound emissions in mind.

China is currently in a league of its own when it comes to trawling emissions and therefore would benefit most from additional protections from a carbon perspective. Russia, Italy, the UK, and Denmark follow.

However, rather than focusing on just one outcome, the researchers emphasize that countries can optimize for all three goals — fishing stocks, biodiversity, and carbon reduction — if they design their marine protected areas carefully. Critically, the authors found that increasing marine protected areas (MPAs) can boost fish supplies instead of diminishing them.

Here, the authors treat carbon benefits as secondary, since marine protected areas are currently designed with a primary focus on biodiversity.

But Atwood hopes this study will help bring more visibility to trawling emissions and their significance. The carbon benefits from preventing trawling are being considered for inclusion in carbon markets, she said. That could actually make this problem part of the biodiversity solution.

“If there is a way for them to leverage the carbon benefit from [creating MPAs], it is a potential pathway for paying for marine protected areas,” Atwood said.

Until then, more than two dozen startups riding the wave of an emerging fish welfare movement — and the growing awareness of overfishing and fish farming problems — would love it if you tried some plant-based fish.

The #MeToo movement and its evolution, explained
How to watch the first presidential debate between Joe Biden and Donald Trump
How Joe Biden could make Brazil his first “climate outlaw”
This photo of a dead father and daughter shows the true nature of Trump’s immigration policy
The faulty technology behind ankle monitors
This new translation of Beowulf brings the poem to profane, funny, hot-blooded life